Well, the first package of the year arrived: 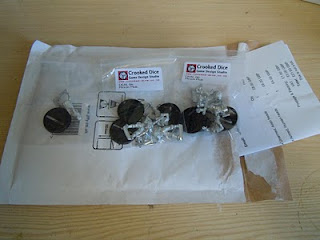 from Crooked Dice, two sets of their new minions (armed and unarmed, with human and alien head sets), and their casually dressed not-Amy Pond sculpted by Andrew Rae (which I thought I'd ordered when it originally came out, but then could find no trace of said order). Lovely stuff, and great service from the chaps at CD HQ as always, but these have already been filed into the Star Wars shoebox where I'm keeping all my recent miniature purchases (which is a lot more organized than my previous system of 'in a massive pile on my desk') until it stops raining long enough to undercoat some minis.

The arrival of these took the year's tally to:

So I cracked on with some painting, and finished the following; 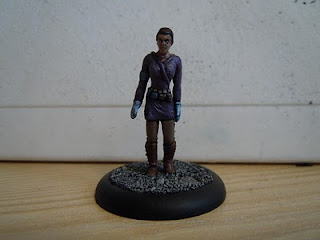 Quite literally 'faceless', in this case, as she was originally a Star Wars prepaint (I forget which), and there was only so much my meagre brush skills could to in the way of reconstructive surgery. It's also quite sad that the first finished mini for this project is a randomer, but hey, progress is progress. 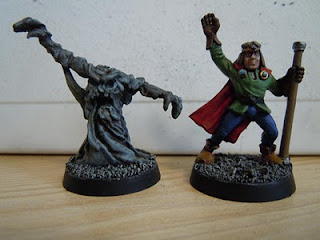 You remember in an earlier post I mentioned that I may have forgotten some projects from the list? This is one of them (as is Afro Samurai, but we'll come back to that if I ever do anything about it). At some point in the future, I'd like to play dnd 4e. No specified timeframe, or definite plans, but like most of my great ideas I leapt in feet first and started buying up all sorts of generic fantasy minis, digging out old copies of dnd boardgames, and then not doing much more.

Which brings us to these two: the sludge monster was originally a Mage Knight prepaint (from a Ral Partha sulpt, iirc), and to look at it you wouldn't believe how many layers and washes went into this paintjob (it was something along the lines of 'apply layer; apply highlight; apply glaze; frown; wash; frown; repeat'). The wizard is from Heroquest, and came from an ebay lot that I bought because I wanted the Heroquest mummy (which is currently still half finished in the painting queue), and was nicely nostalgic to paint, hence the use of so many primary colours. That, and he got blue trousers because it looks like he's wearing jeggings. Metrosexual wizard FTW!

Taking the tally back into the green at:

Which brings us to today (these were finished at around one in the morning, and I didn't fancy typing all this up as well). An excursion into town via the sorting office so my young lady could pick up her new camera led to the acquisition of this from Poundland: 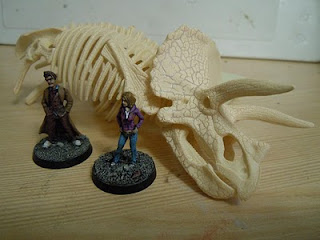 One of those dinosaur skeleton kits that seem to pop up all the time on various forums, shown here with the Doctor and a companion for scale - I'm thinking a few quick cuts, a base and some gravel, and voila, perfect scenery for pulp, VSF, or any number of other settings. However, saying how quick and easy it will be doesn't mean I'm likely to get it done any time soon...