And at first he didn’t hear what this talking key was shouting... 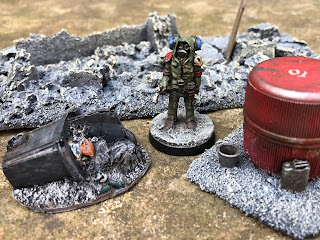 This month’s competition over at the Zona Alfa Facebook group was for a single character miniature, so here is my entry! I spent February thinking ‘I’ve got plenty of time’, then March really spiralled out of control!

Government mandated lockdown has meant I was able to have a natural light photo shoot in the garden, which was nice: 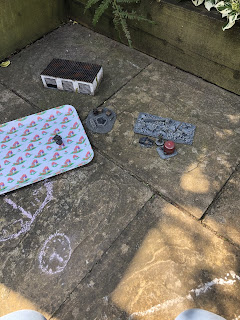 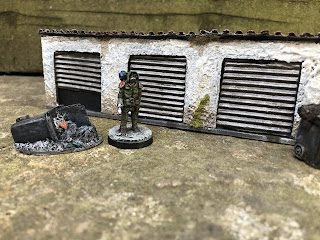 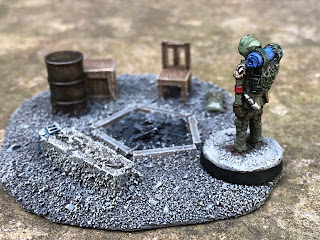 He’s the ten year anniversary miniature for the Post Apoc forum produced by Mattblackgod, with a pistol donated from a Heresy Miniatures ganger. He’d been sat on my desk for the best part of a couple of years, as I’d been indecisive about what to equip him with - originally I’d use him with my Fallout project, and convert him to be holding some sort of rusty pole, but I couldn’t find anything the right thickness to use... 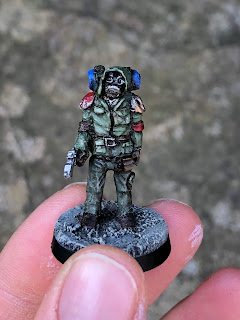 Then Zona Alfa came along and he got expedited up the painting queue! I’m especially fond of what I can only assume is a tactical Camembert hanging from the back of his belt... 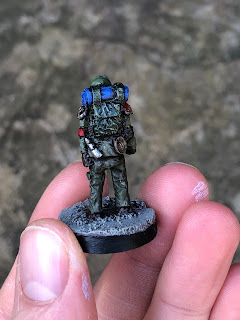 Painting him was mostly an exercise in ‘how many different greens can I use?’

He’ll either be a green recruit, or an objective that you have to escort somewhere (for those of you that have read Roadside zpicnic, think of him as a living key...)

So first miniature finished of the year gets a point on the Tally, although since my last post 8 also bought a second copy of the first Mortal Realms magazine to fuel my bits box, as well as a copy of the second issue (because cheap snoopy banshees was too hard to resist!)

This isn’t the only hobby work that’s been done though - although admittedly, being on government-mandated furlough you’d think I’d be getting a lot more done, but alas I’ve been homeschooling my daughter which has left me only slightly more hobby time than being at work! 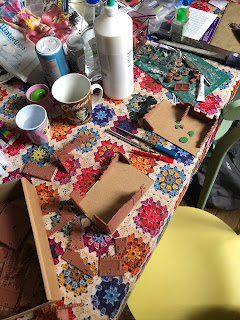 I’ve been sprucing up some old Mantic Mars Attacks ruined building sprues to populate my exclusion zone, using a green stuff mould to cover the unattractive connection points (an idea stolen whole cloth from Tabletop Terrain), as well as digging through my backlog to convert some enemies. The downside to not being able to leave the house is that instead of plastic add, I’m going to use coffee stirrers to cover the corners, and I can’t exactly nip out to grab any more if I run out...

I’ve also been... slightly distracted by Mordheim. I’ve managed to resist starting anything, in order to press on with ZA, but my mind wandered somewhat when I was thinking about what changes you would need to make to run Path to Glory with Mordheim combat rules, which then led to me thinking: wait, Mordheim sure was cool want it, and you have enough miniatures in the game box to make several war bands... also, before lockdown became a thing, my wife and I were prepping just in case, and at my request she picked me up several sheets of foam board so that I could knock up some Mordheim ruins if need be (but again, if I run out of coffee stirrers...j