So, it's been all quiet for a while now, due mostly to moving house. The bulk of the back-breaking, soul-destroying part is over, but currently my desk looks like the picture (normally I'd put it next to the relevant piece of text, but I can't see a way to do that on my iPhone...)

Also worth noting is the sheer amount of stuff - a lot of stuff went into storage, but these boxes of games and whatnot are the ones I thought I'd need in the next six months, much to Nicole's consternation...

And, in the interest of full disclosure, of course more miniatures have arrived since the last post, 7 in fact, leaving the tally at:

Rapidly running out of year, I think it's safe to say I won't be back in the positives until the clock resets with the new year... 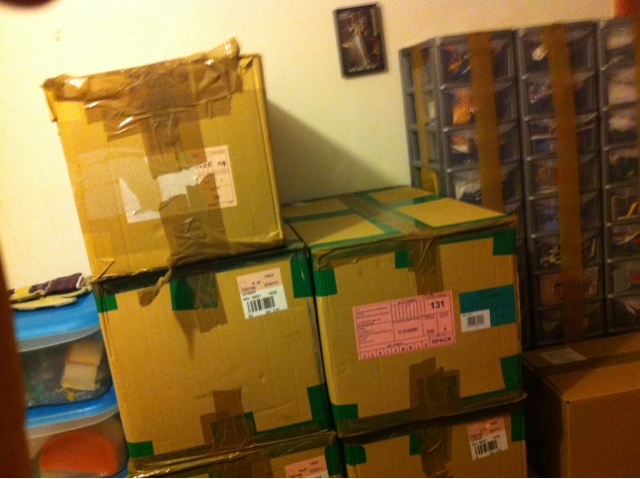 Posted by myincubliss at 08:18 No comments:

Email ThisBlogThis!Share to TwitterShare to FacebookShare to Pinterest
Labels: tally

Scott Pilgrim references aside, I managed to paint my Threshold Team for Strange Aeons: 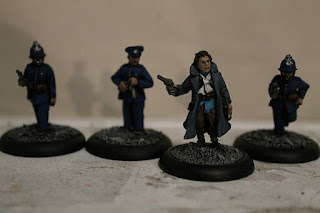 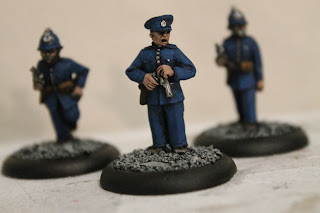 These badboys were bought at Salute, a mere six months ago (which is probably a record turnaround time from purchase to painted for me). I'll probably run the capped chap as an Agent with Lieutenant, and the two officers as Civilians with pistols and clubs (their truncheons!)  [and yes, I did remember to go back and paint in the capped chaps teeth after taking this picture...] 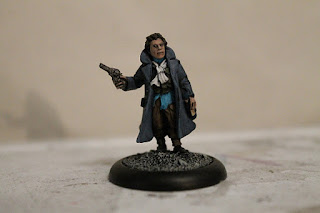 This chap however, whilst also being from Artizan, was actually bought a while before the others, and was originally intended to be the basis of a Captain Jack Harkness conversion. However, before I'd managed to make any progress, Crooked Dice released a rather spiffy not-Jack, so I based this chap on a lipped base and boom, a lick of paint later we have a Cthulhu-fighting Character that's also a bit of a lush (hey, it's thematic, I'll probably give him Morphine in-game...)

Which means (shock horror) I've actually got enough minis to play a game! As long as an opponent has enough minis to provide the other force... although I'm getting there on that front too: 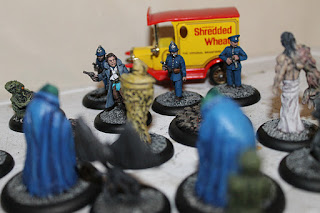 It's not been all focused today though, as I also painted this: 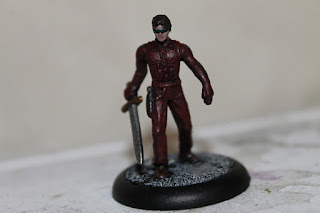 An Operative type chap to chase down any naughty types in Firefly games. He'll probably be run using souped-up Swashbuckler stats, as reinforcements for the purple-bellies (just as soon as I get round to painting them...). He was originally a Star Wars miniature of some sort (a Genohadran assassin I think, but don't quote me on that) that had sat undercoated in one of the WIP drawers for god knows how long, and I thought it was high time he actually got some paint on.

So, with that little lot finished the tally looks like this:

Creeping back in the right direction, but I don't for a second think that I'm going to end the year in the positive  (short of selling a ton of minis or taking time off from work to paint morning noon and night), I think a more realistic goal would be aiming to finish better than -150...
Posted by myincubliss at 22:26 1 comment: