Is that still topical? Either way, I’m falling behind in both painting and posting, as these were actually finished last week but I’m only getting around to posting them now: 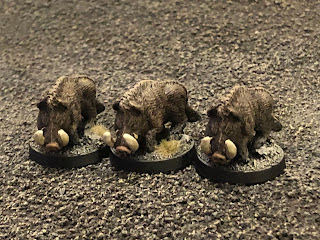 Boars! These are single pose minis from an old D&D board game that I dug out whilst rooting through boxes in the basement, and I thought would make the basis of a good potential wilderness encounter if I ever get round to running a D&D game... 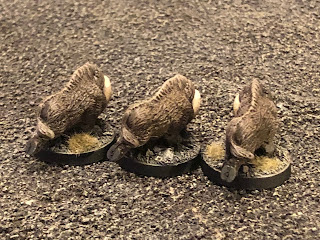 Whilst discussing what I was currently painting with someone at work, I told them ‘boars’. ‘What’s a borse? Some fantasy thing?’ They asked, to which I replied ‘no, you know, like a hairy pig?’

In other news, my wife recently bought a fancy pop-up photo booth for her business, so expect pictures on the blog to show glaring flaws more obviously (not in the next post though, as the photos were done for it before the booth showed up - I mentioned at the start of this post that I’m behind on posting right?) 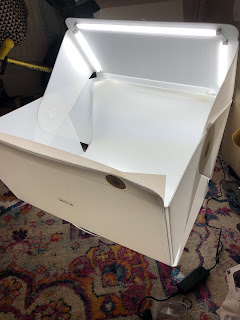 (See also our new rug, that my wife is very happy with) 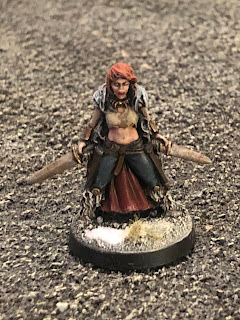 Another mini finished as the end of the year looms closer, this time a lovely Hasslefree sculpt that I’ve painted as a ‘Wildling princess’ for the A Song of Ice and Fire / Game of Thrones project. Having a nicely sculpted face helps with the painting, although the flesh tones on this miniature were actually painted ages ago before she was relegated to the ‘Work In Progress’ drawer for who knows how long, so may have been before my current face painting slump began! It’s hard to tell in this picture, but she does actually have pupils, although I went over them again with the Micron pen after taking this picture to make sure they were more visible, as you can see in this blurry close-up: 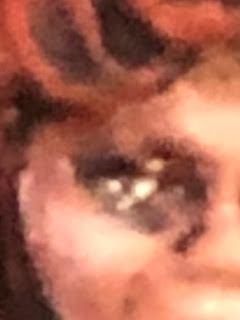 Just to head off the inevitable criticism at the pass - yes, as she’s a Hasslefree mini, there’s more underboob on show than would be practical for a barbarian lass from snowy climes (the gloss varnish on which is actually still wet in these pictures) I know. The rest of the Wildlings in the queue are practically dressed I promise. 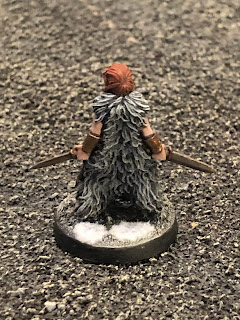 One thing that was especially fun about painting a Wildling was the fact that they tend not to have much in the way of iron weapons and armour, so painting her bracers and other metal details in a variety of shades was an interesting challenge, and Indecided to paint her twin blades to look slightly rusty and worn, as if they were long ago scavenged and not particularly well maintained. She got a head of red hair as I figured that being ‘kissed by fire’ would only add to the Wildling princess feel!

May the Shiny be with you... 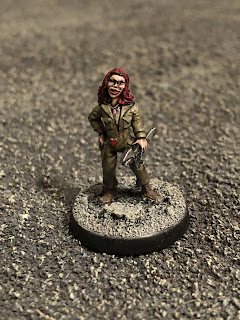 Thus begins the mad dash to get my average painted figures up to one per week before the end of the year! This lady is a Heresy sculpt that was originally purchased to be a Kayleigh-expy in my Firefly project, and then sat in a drawer for a few years, but only got started when I watched The Last Jedi and thought she could pull double duty as a Rebel / Resistance engineer of some sort after seeing Rose Tico banging around in a jumpsuit! 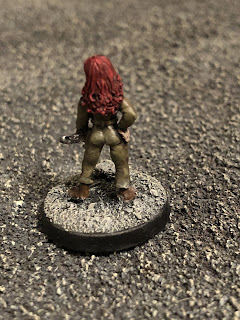 She’s been mostly painted for at least a year, I’m fairly sure, so it only took a couple of touches to finish her off. Her face isn’t great - it looks like I’m having an off year for painting faces!

Originally planned as a big finish for Zomtober, I was going to slyly work on these between my main offerings, but somehow managed to only really finish the bones across the four week period!
Once I’d missed that window, I thought maybe I could speedily finish them off in time to post for Halloween, and while the Risen were soon brought to a finished state, I ended up really enjoying painting Alexia, and taking my time on her (well, as much time as a few minutes a night every other day can be, having two children is eating into my painting time!). A few minutes here and there all add up though, so now I have my first finished Warmachine unit: 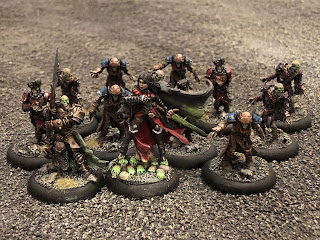 ‘First unit?’ I hear you cry? ‘I thought you got into Warmachine in the Mk 1 era?’

Yes I did, but to my shame what little has paint on is at best half painted, so this is the first thing for the game that I’d actually be willing to post on the internet for other people to see. They’d been in their box for ... I don’t know, but it’s probably something like a decade...

Onto some slightly closer shots!

First up is the Cygnar contingent: 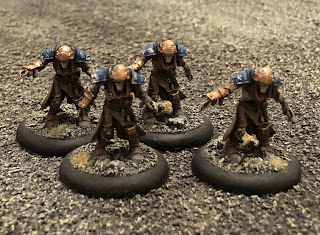 I bent their arms gently to try and create some variety in their poses. Minimal effort, minimal result, but that’s fine by me! 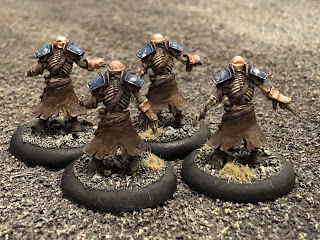 I’d originally planned to give the Risen a base coat and a wash and call them done, but inevitably I got carried away giving them some highlights, weathering, and a little battle damage to make them more visually interesting. 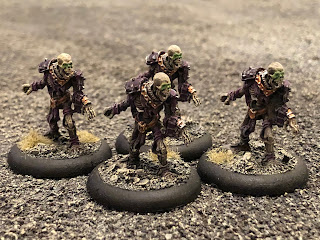 Not a lot I could do with these to add variety, given the sculpt. One of them you’ll notice is also mid-cast, as he has additional material in the space between his arm and torso, but I figured it was probably too late to get in touch with Privateer Press about getting a replacement! 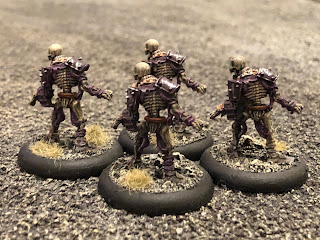 I went with purple for the Menoth Risen to make them stand out from the Khadorans, rather than any specific army colours (although I could have claimed I spent hours of gruelling research poring over old magazine articles coming up with it)

Speaking of Khadorans, here they are: 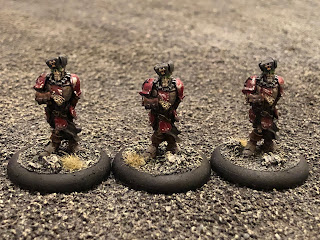 I think that it’s supposed to be a fur trim/collar around their neck, but to me it will always look a bit like they’re wearing a fake beard! 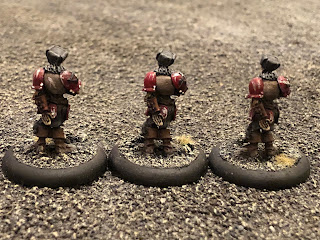 Next, is the Thrall Warrior, which is an absolutely lovely miniature - I went with a fairly simple paint scheme in the interest of speed, but couldn’t help but go back and add little details and areas of interest, like making different areas of the armour look like different materials, or giving the blade a green hue to make it look sickly and evil... 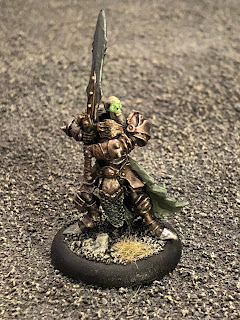 I painted the back too, as is traditional: 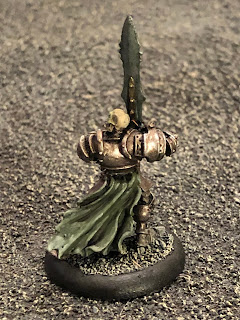 I went for a fairly subdued cloth for his cape, to make Alexia stand out more...

Speaking of Alexia, onto the main event:

Having not read or played the Witchfire Trilogy, I had no preexisting nostalgia or love for Alexia before I bought her - I think I saw a goth girl with a magic sword raising zombies and thought ‘cool, that’s entirely the sort of thing I like, I’ll pay with cash please’. Now, ten or so years later, I’ve finally painted her! 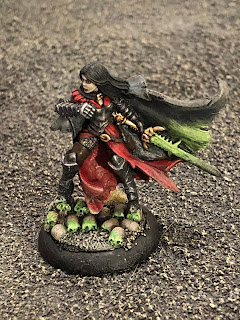 She’s a beautiful sculpt, as is to be expected of anything sculpted by Kev White (and when I googled to confirm this, I was reminded that Paul Muller sculpted the Thrall Warrior and Risen, making this officially the greatest collaboration of all time), and was a real pleasure to paint. I even tried out some techniques I’d never tried before, like OSL on her sword and glowing eyes (although I think the eyes came out best on the skulls on her base, and are somewhat hit or miss on the rest of the unit). I also experimented with mixing metallic and non-metallic paints to get an unusual colour for her armour (it’s a dark grey with just a hint of metallic as a base, with metallic highlights and weathering). 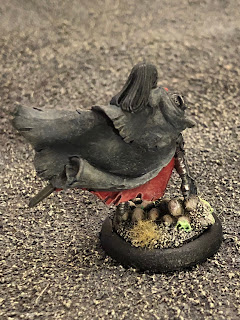 I spent some time carefully layering her black cloak with dark greys, an effect that is absolutely unnoticeable after I went a bit gung -ho weathering it (as I imagine on the run from churchy types that aren’t keen on her raising the dead she’d probably get fairly dusty).

Side note: painting the gold on the Witchblade was a pain entirely due to Liberator Gold - my pot had separated so completely that it was entirely orange (the shade you can see on the edge in the picture below) - weeks of shaking had done nothing to recombine it, so I grabbed a cocktail stick and started dredging up the actual colour from the bottom of the pot. As you can see, it’s not quite the colour it should be (the colour at the bottom) but I’m getting there! 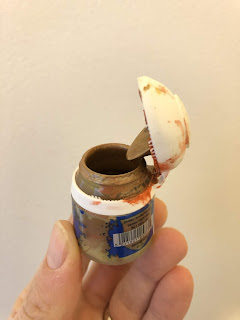 So, finishing these brings the Tally to:

And also lets me cross something off of the 2019 Challenge!

Everything else is looking a bit shaken though, as I’m rapidly running out f year!