Week five of Zomtober 2021, we have a before and after set of miniatures: 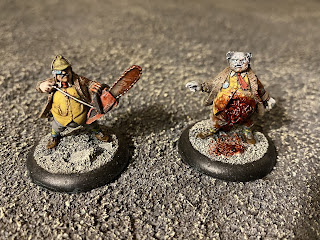 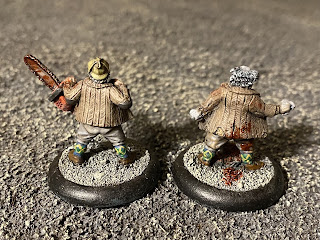 You can just about see my attempt at painting tiny argyle socks here, as suggested by my wife who bought me the set of Frothers miniatures they are from 12 years ago according to the integral base on one of the minis: 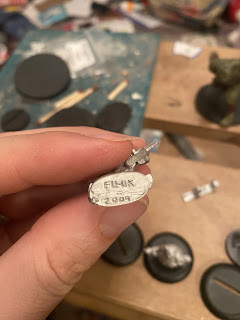 I mentioned this to her, and she suggested that if I’m only now getting round to painting miniatures that I got twelve years ago I probably don’t need to buy any more, but that can’t be right surely…
If I were to paint him again, I’d probably strive for greater definition on the face of the zombified version, as I think the grey moustache is too similar to the grey zombie skin, but I’m not sure if I’m feeling brave enough to repaint it for fear of having to redo the whole face!
Painting this pair of chaps brings the Tally to-
but wait there’s more, with a bonus Zomtober offering!
Having been watching Y: the Last Man (and having re-read the comics in preparation for the tv series) I thought what would be more helpful in the zombie apocalypse than a helper monkey?

So off to the monkey box I scampered, and lo, here is my Ampersand expy: 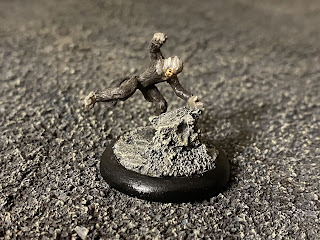 Look at his little monkey face! 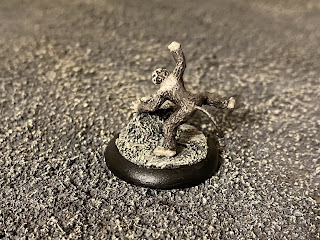 Admittedly, you need to suspend your disbelief somewhat, as he’s approximately four times bigger than a capuchin monkey should be: 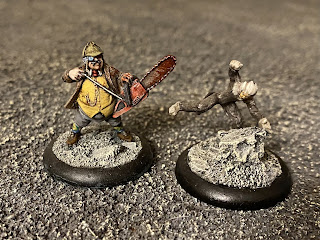 But hey, while I didn’t have a capuchin monkey miniature, I did have a Moon Boy mini from a Devil Dinosaur heroclix, that I was able to fashion a tail for using a length of wire and some liquid green stuff: 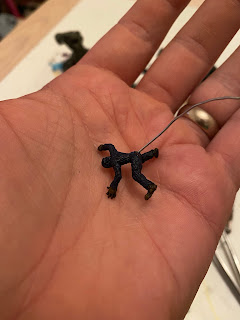 I was tempted to sculpt him a little green stuff diaper, but decided to leave him au naturel so that he can pull double duty in the long postponed Rise of the Planet of the Apes project (looking back through the blog, it seems there was a two year gap between miniatures for that project, then three years before the next, then four years until this one, so following that pattern I’ll next post one in 2026).
So, all in the Tally now stands at:
31 vs 23 = +8
Posted by myincubliss at 09:00 3 comments:

At some point in the past, I saw that someone had produced a chart of what probability you had of getting each result on the Frostgrave Wandering Monster table, which struck me as very handy for planning what you were going to paint as a priority before starting to play the game. Unfortunately, no amount of googling or asking on Facebook has been able to find it again, so I sat down with a coffee and pencil and paper to work it out myself: 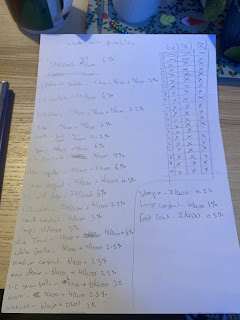 So, it looks like I need to sort out some ghouls before I paint the worm that’s sat in the painting queue!

Email ThisBlogThis!Share to TwitterShare to FacebookShare to Pinterest
Labels: Frostgrave

This week’s offering is four zombies, absolutely gorgeous sculpts that were purchased eons ago from Tengu miniatures, which I believe are available from CP models these days. Typing the words Tengu miniatures also sent me off on a quick Google to see where the other minis from their range ended up, especially those Kappa that I had no need for originally but having since started a fantasy samurai project could probably find a home for…

Lovely to daub paint on, and then great fun to weather. My favourite of the four sculpts is probably the Afro girl in hoodie, who also got adidas stripes after my attempts last week: 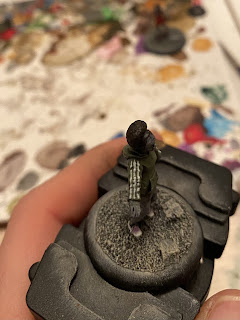 The mini on the far left almost delayed this posting, as unfortunately as I was putting them away one evening after finishing painting them ready to photograph the day after, she took a tumble off the table and somehow managed to get chipped on both her chin and the rear of her ankle, which necessitated some sneaky cover up work to hide! I was initially tempted to hide it with a judicious coat of blood effects, but thought that might be overkill…

Finishing these, as well as the satisfaction of another deadline met, brings the Tally to:

(Halfway to the goal of averaging a mini a week, with only 2 months until the end of the year…)

This week's offering is another Hasslefree survivor, another fine Kev White sculpt: 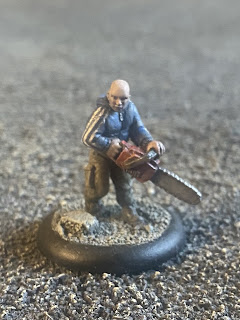 I have him stripes down his sleeves, as a bit of visual interest but also mostly so that I could make this joke on Instagram: 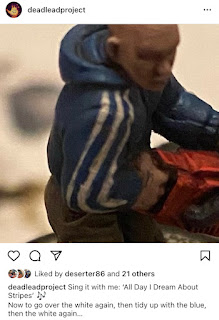 What is the fascination with chainsaws and zombies? Practically, it would be less than ideal as a zombie-fighting weapon: heavy, loud, needs refuelling. On the other hand: 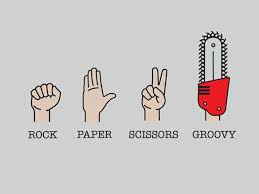 I went to town weathering this mini, and I think he looks much better for it! Dusty, grubby, oily, this is someone that has had other things on his mind than laundry recently… 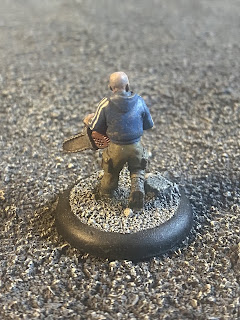 You can’t really see it in the other pictures, but I also gave him a five o’clock shadow, that also highlights that he’s shaved his head because he’s balding than for purely practical reasons: 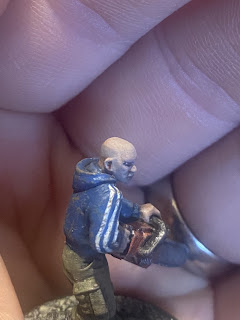 Another Sunday, another zombie themed submission!

This week I present for your delectation a Hasslefree survivor that I think was originally prepped as a backup mini for a previous Zomtober, and so has sat undercoated waiting for her time in the sun for far too long. 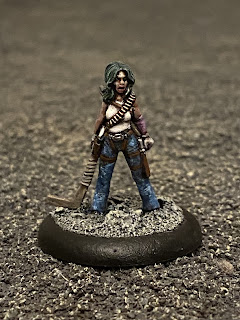 The details on the face are very fine, and I think I went too pale and lost some of the definition - there’s nothing like painting for a deadline to lower your standards though! When initially taking the pictures for this post, I noted how pale she was and went back to add some colour to her lips to try and make her look a little more lively, but I think all I’ve succeeded in doing is making her look like she’s enjoyed some beetroot at some point in the past… 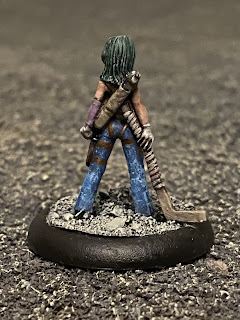 I also wouldn’t have gone as light on the hair if I were to paint her again - up until that last application though, it looked very flat and dark, so I’m not sure that a do over would come out any better (as ever, I asked my wife to suggest a hair colour, as is usually the case whenever I’m painting near her). The acid wash jeans effect is a little hit or miss too, but again, done is done, so points on the Tally!
23 vs 23 = +0
Back to equilibrium!
Posted by myincubliss at 10:38 5 comments:

And so begins another year of Zomtober! In case this is your first brush with the annual challenge, the aim is to paint and post at least one zombie themed miniature every Sunday in the month of October. I’m not sure if anyone else is doing it this year, but if you are shout in the comments!

So, submission one, a Zombie Hulk: 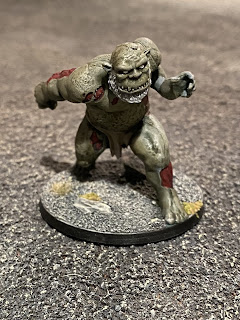 Fun fact - taking these pictures I noticed some patchy bits on the green, like his wrist, so have gone back and fixed that! 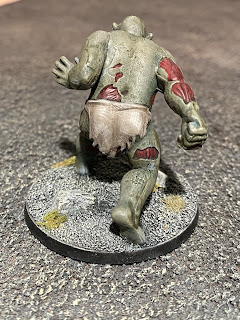 Here you can see I tried to paint some texture on his loincloth, to give the impression of it being hideous scratchy sackcloth rather than a luxuriously silken garment…
I don’t think this mini even has stats in the current edition of Dungeons & Dragons, so if he sees the table it will likely be as some sort of ogre with zombie rules added in.
He’s quite a big lad, looming over any human sized adventurers that might cross his path… 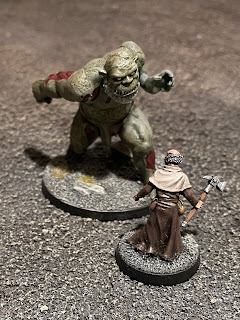 Painting him brings the Tally to:

So, what’s next? More zombies, obviously! As is always the case though, despite having prepped everything I needed ready for a month of thematic painting, I of course found my mind wandering while doing the washing up last night and realised I could do something from the monkey box that thematically ties in to the month…