The next step in my plan to conquer the overworld (or at least the part of it the chum I’ve challenged to paint a Warhammer army is standing on) with a sea of ratty types is completed: 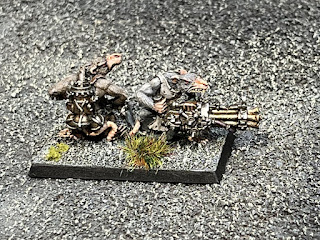 Gorgeous, and a joy to paint, even if grey-furred ratmen don’t show up particularly well against my usual display board background. 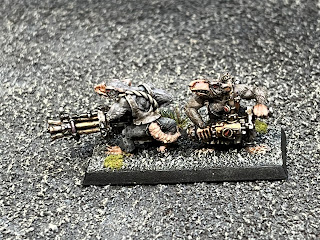 I was so happy with these that they even got their vanity shots done using actual sunlight, unlike 99% of what I paint which gets photographed at midnight in my basement or balanced on my dining room table. See also, tufts and flock, making them technically the only fully finished mini in the whole army!
So, why the Ratling Gun? The first benchmark is 500 points, against an opponent painting an equivalent amount of Bretonnians, so my options from the miniatures in my collection were:
Poisoned wind mortar - move AND fire, good at killing knights
Warp fire Thrower - absolutely archetypical, good at killing knights
Ratling Gun - most likely to misfire, bad at killing knights, punny name
Me, in this situation: 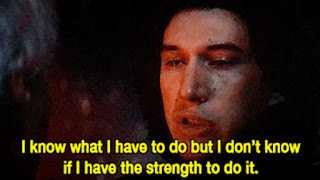 Eh, I made the right choice. We’ll see how it goes, I’m generally luckier with D6s than I am with D20s. Plus, at this low points level the Bretonnians have a general on foot, so you never know…
The Tally took a hit in the opposite direction too this week, as GW are offering a free Skaven to cut out and keep this month, so I made an excuse to nip in for a pot of paint (not pictured) and grab one of those: 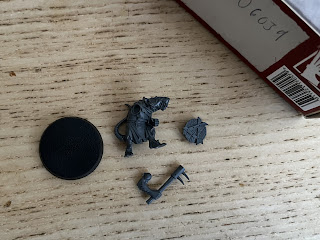 I mean I’ve got dozens already, but I always need more right? I might see about getting a pack master arm from somewhere and converting him, as the old plastic pack masters look a bit chonky compared to the modern cleanest sculpts.
Tally:
49 vs 47 = +2

And to end the post, here’s a group shot of the army so far: 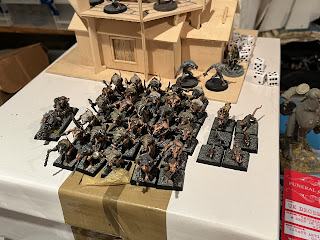 All 140 points of it so far - the Ratling Gun is only 7 points shy of that unit of Slaves it’s next to! 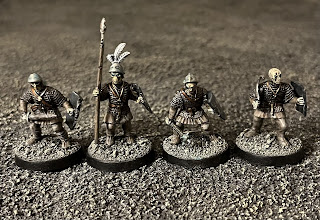 Way, way back in the shrouded mists of the past known as March 2022, my family all had COVID, which wasn’t ideal, but on the other hand having a week off work did give me the opportunity to start playing some solo Frostgrave. Having made my way through the three scenarios of Dark Alchemy, I decided that the next thing I wanted to do was hire a Captain, and the solo scenario ‘Alone in the Crypt’ from Spellcaster issue 1 seemed like the perfect way narratively to introduce a Captain to my warband.

Scanning down the encounter table for the scenario to see what monsters I didn’t already have in my collection, I saw that I’d need some armoured skeletons. Most conversions that I’ve seen tend to be in full plate, transplanting skeleton heads into Perry medieval knight bodies (which was my initial plan), but digging through my backlog of kits one day I came across a box of plastic Vikings that realistically I’m never going to use for anything, and figured I’d give them a go as a base for some chain mail wearing skeletons: 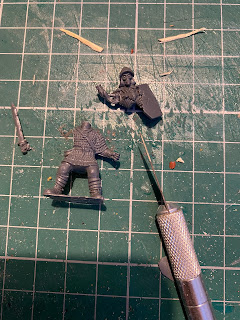 Each miniature is a mashup of Viking (from Gripping Beast) and leftover Mantic skeleton bits (that I’m fairly certain I was gifted years ago by Infovore.Tim). As the shield arms are generally single piece with the skeleton bodies, this often involves a lot of careful cutting, scraping and filing to get everything to fit together. 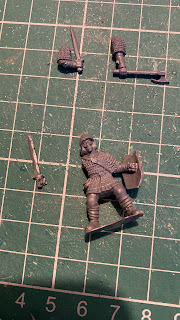 I thought I’d taken more WIP pics than this, but apparently not, so we’ll jump straight to this shot of my four converted boys: 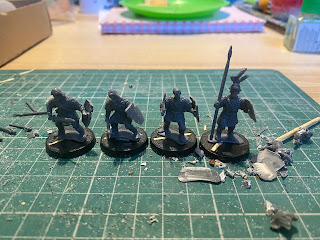 I figured four was enough, as the most you’re likely to encounter per roll on the encounter table is 2, and anyway I’ll be smashing these to pieces so quick they’re unlikely to spend much time on the table (oh sweet hubris…). I gave them a variety of different weapons to make them look less like a uniform unit, but conversely made sure three of the four had matching helmets so that they would have that visual detail to link them. What can I say, I’m a walking contradiction.
Whilst painting them, I fancied giving them all a cheesy skeleton logo on their shields, so dug out an old Chaos Space Marine transfer sheet. I know, it’s a bit silly (did they have skull themed insignia when they were alive? Did they repaint it after they were reanimated?) but some things are just classic: 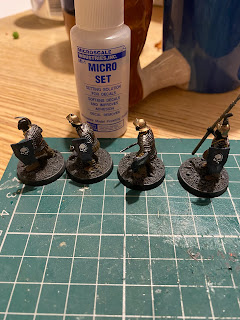 And here they are after the rest of the paint job was done, suitably weathered: 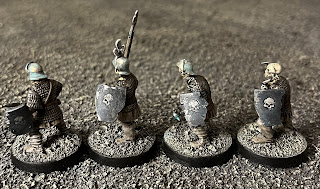 Top tip for anyone using the verdigris effect paint from GW: make sure the lid is firmly on when holding the pot directly above your finished models! There was an… incident, that involved frantically trying to dilute bright blue paint and mop it off of the models before it dried, and a few touch ups. I think they only place you might still be able to see it is on their bases, but I can always pretend that’s an intentional effect, representing the magic leaking from these walking corpses and leaching into the ground…
And just to complete the set of images, here’s the back of them: 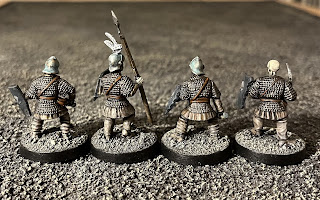 Painting these brings the Tally to:

Back in the positive, and also so close to hitting the ‘miniature a week’ yearly average of 52 miniatures painted with 5 months still to go on the year!

What’s next? Back to the main project of Skaven, of course, but for the next non-Skaven miniatures I still need some ghouls and a vampire before I’m able to play that Frostgrave scenario…

Clutter makes a house a home

And I’m assuming the same is true for dungeons.

Looking at Frostgrave, Rangers of Shadow Deep and Dungeons & Dragons, one thing I realised was I needed more oddments of scatter terrain to give rooms some personality. So, with that in mind, as a little palette cleanser between Skaven regiments I finished off this: 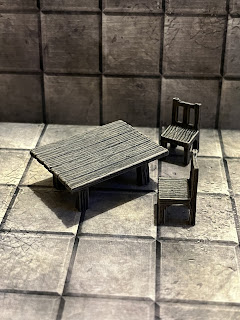 Even gnolls need somewhere to eat their tea, right? The table looks a bit 3d printed in this picture (new phone, new camera, new clarity apparently) but I can assure you it’s not, it’s from the same Frontline Miniatures set I used to build my Fallout scavenger camp way back when.
No change to the Tally, as they’re not actual miniatures, but rest assured, they’re not the only palette cleanser on my painting tile right now…
Posted by myincubliss at 21:37 No comments: