What is best in life? 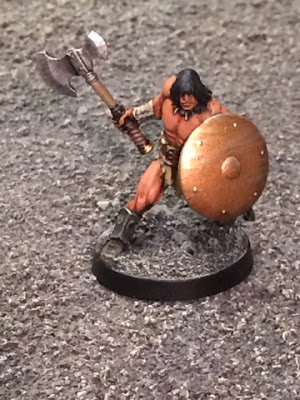 
I love Conan, and have had vague plans to game in Hyperborea for several years now. Small scale, run using the Song of Blades and Heroes ruleset, borrowing models liberally from the other fantasy projects, it's yet another one of those ideas I had where I thought 'this is small enough that I'll be able to finish it and actually get a game in' that then ended up getting mothballed until my attention swung back round again... 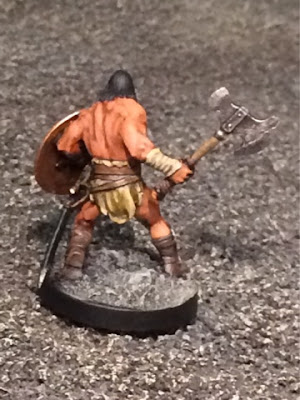 Admittedly part of the reason for the delay was finding a miniature that I was happy with for the main man, but in the end I went with this lovely lad from Hasslefree.

You might notice a slight bit of shininess and or discolouration around his axe arm, which is a result of repairs and some minor cosmetic surgery after an escape attempt: 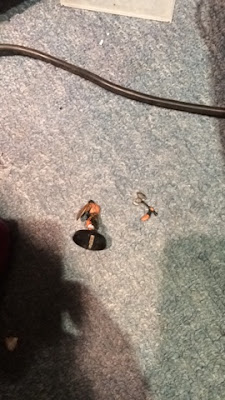 I have vague plans for a 'tree' style campaign (the kind where if Player A wins a game, you play one scenario next, but if player B, you take a different branch, potentially unlocking additional reinforcements or other boons in a final climatic battle along the way), which I'm sure I started sketching out on a scrap of paper that I should probably try and track down...

Conan doesn't want to take on the cult of various snake gods on his lonesome, though, so I've also finished one of the chums I have for him in the painting queue: 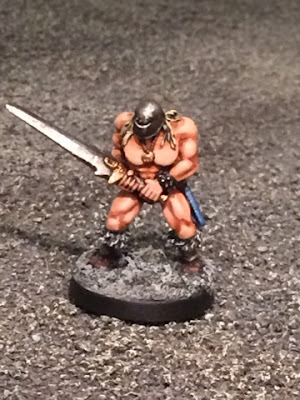 Nice, classic Grenadier/em4 barbarian. Chosen almost entirely because I love the idea of a near-nude berserker taking the precaution of wearing a full helm (I assume his mother made him promise to never go out without wearing his helmet, and so he always has). He was also painted to a lighter skintone than Conan, to make the big guy seem all the more bronzed by comparison. 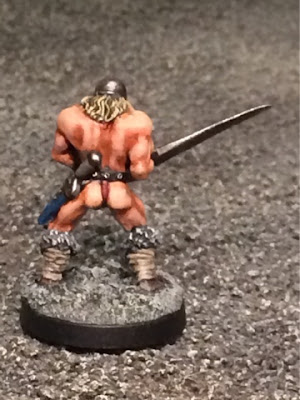 I feel like I might have missed a trick by not giving him a comedic beauty mark or heart tattoo on his backside though...

And here's the pair of them together: 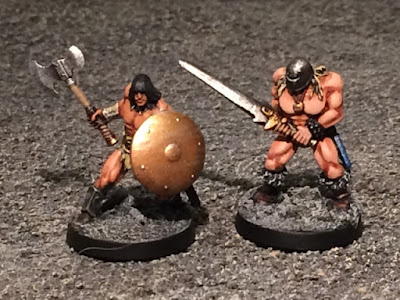 The Grenadier barbarian looks a little bigger and chunkier than Conan, but that's fine, he's in a more dynamic pose, and was always described as being athletic as well as beefy, so I'm still happy with my choice!

Back in the black!

Necromunda pre-orders went up today though. I've been good so far.
Posted by myincubliss at 00:33 4 comments:

Only in death does duty end...

...and even then that's not a given, as if you're suitably pious you might get a small anti-grav device attached to your cleaned skull so that you might be able to bip around looking menacing near an inquisitor, and if you're doubly lucky you might even get a laspistol grafted on, to ineffectually highlight to the enemies of Mankind your exact location so that their vengeance might be swift and terrible. 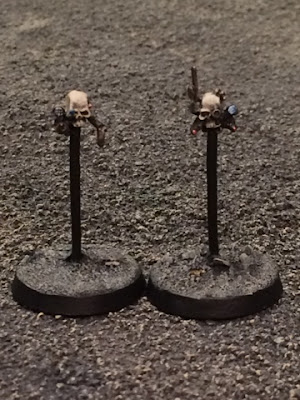 So, I finished a couple of servo skulls! They're a bit silly, but so quintessentially grimdark I couldn't resist. There's two, despite the fact that warbands can only take one in inquisimunda, but I guess it gives me the option of taking one with a small gun or one with a pair of crafty manipulators. It shouldn't matter that only one has a weapon, because we should be all about narrative over power gaming. I'm not competitive. No sir.

Necromunda is going up on pre-order soon, so I think I might have to have a bit of a clear-out and list some unused projects on eBay! Why would you do this so close to Christmas GW, don't you know we have families to buy presents for?
Posted by myincubliss at 16:30 2 comments: