So, 100 posts! To celebrate, I've finally gotten round to changing my blogger profile pic to this: 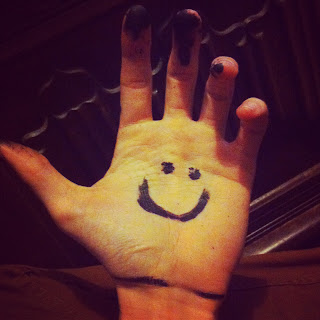 Because as much as I love Sam & Max (RIP Lucasarts) it says more about me and my tiny attention span...

I even considered changing the header image too (as it's been a while since I painted any modern zombies) but I still like that it plays on 'Dead Lead Project', as it's a blog about dead lead (as in the miniatures that I will likely never get round to painting) rather than necessarily just miniatures of dead things. Any road up, on to more miniatures that I've acquired since Salute that I will definitely get around to painting: 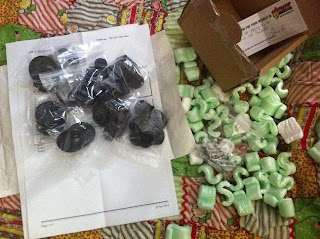 The Dog handler from Warlord Games that was ordered at Salute as they'd run out (and even came with an extra dog) for my Stark force, and a bundle of bases from em4... the 40mm variety of which don't fit into the War of the Ring bases from Games Workshop that I hope to eventually use when I've painted enough miniatures to be playing anything bigger than a skirmish scale game: 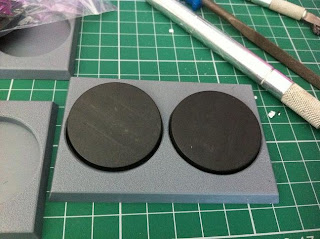 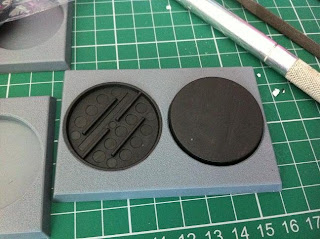 Except for upside-down, when they fit perfectly. Curses. Oh well, it's better to realise something like this now than once I've stuck horses to them, and I suppose I can scavenge some Terminator bases from old 40k starter boxes... 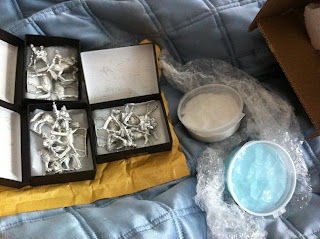 A selection of bits and bobs from the Perrys that I forgot to pick up at Salute and some Blu Stuff, 2 part mould-making wonder goo (more on this later...) 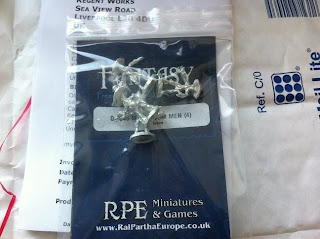 Some mushroom men from Ral Partha, to go with the Hasslefree Agarix I picked up at Salute - these are especially dinky though, so I might need to convert some sort of Ogre-sized Myconid to balance it out... 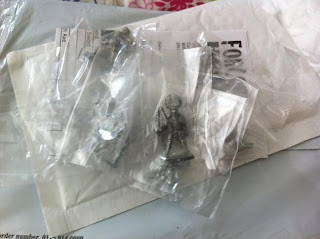 A bundle of knights and a priestly type from Forlorn Hope Games, who seem to have more em4 miniatures than em4 do, for use as plate armour wearing Hedge and foot knights... 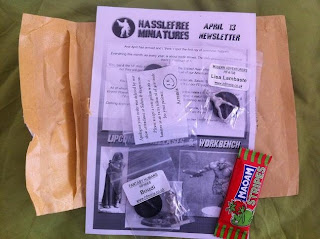 From Hasslefree, I got the metal Boudi that I wasn't able to get as Salute, and added a 'not Ramona' as well to take the sting out of paying for postage (and also because I made the mistake of reading other people's blogs when they included lists of things that they'd bought at Salute, more fool me...). It also came with a free dinky homunculus, to make up for the fact that the order was delayed by various shows, who I'm sure I can find a home for somewhere in the multitude of generic fantasy drawers (and should be pretty quick to paint, as he's so tiny!) 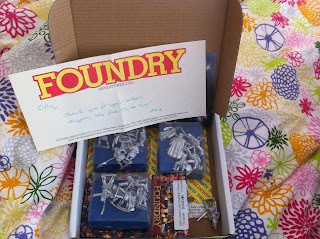 And last but not least, a delivery from Foundry, of the two packs that I wasn't able to pick up at Salute - the archer command (for commanding my Lannister archers) and King Ronnie's Court (as I wanted the jester to convert into Shagwell, of the Brave Companions / Bloody Mummers). I also added a pack of armed Medieval peasants to take the edge off of the shipping charge (better than it used to be, but still not ideal if you're only picking up a couple of packs), as I'd like to build a warband of the Brotherhood without banners at some point (and handily a couple of the miniatures in the archer command pack look like they'd be suitable candidates). Speaking of which, I could do with getting some LOTR Ruffians miniatures, especially the chap carrying the noose (Spoilers - the Brotherhood without Banners are fairly keen on hanging people). Foundry even threw in a free knight, which was nice.

Unfortunately though, this takes the tally to:

What can I say, it's been better... Only 8 finished models this year though, that's a bit of a sting... I hope to change that (if only a little) though as I'm still working on the generic fantasy miniatures I need for D&D, as well as having built these: 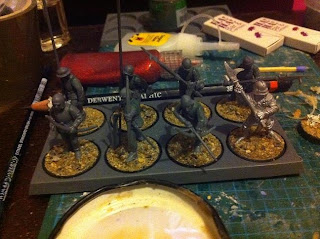 My first Lannisters! Perry plastics with a metal knight from Forlorn Hope / em4 to give them some variety (and also so that there's at least one miniature that I can paint really, really quickly as he's entirely armoured), these chaps have since been gesso'd ready to start painting: 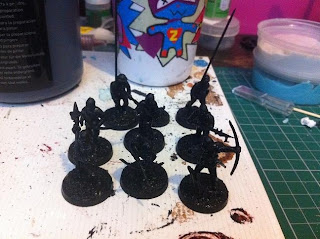 Finally, I've also been working on something else. Although I'm not sticking slavishly to either the books or the TV series for my Ice and Fire Project, I'm quite enamoured with the armour worn by the Lannister House guards in the TV series: 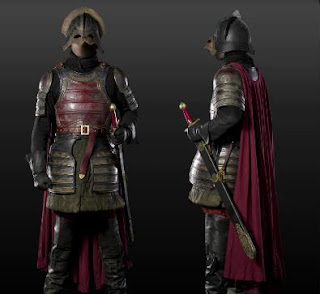 Plastic Warriors of Minas Tirith will furnish me with near enough armour, but the helmet is another matter. So, stealing inspiration entirely from Mr. J over on the LAF, I set about making my own:

Cut the head off of a plastic Uruk Hai (originally painted about a decade ago!) and shave it down so it's less recognisable: 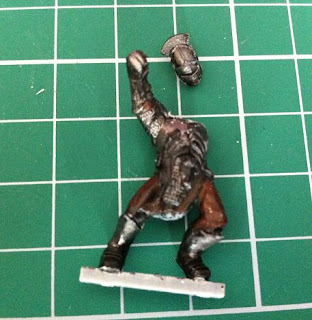 Take a tiny square of plasticard: 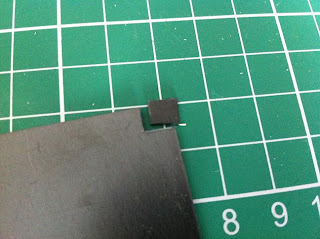 and cut it into a crest shape: 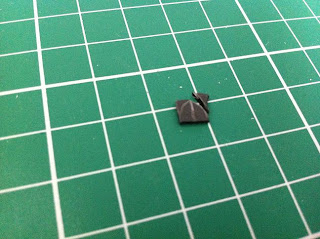 and gently file until it's the desired shape: 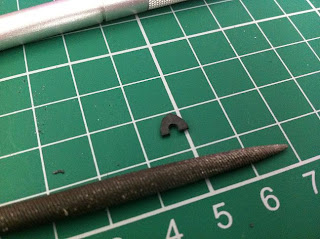 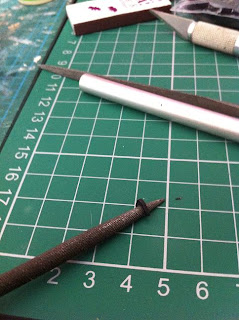 Attach it to the trimmed down original crest of the Uruk helmet, and realise that you've been over-zealous with your scraping and filing. Don't worry overmuch though, that can be easily fixed with the addition of a glob of Liquid Green Stuff that can then be re-filed. 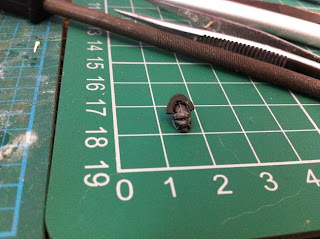 To ease casting (probably), attach the head to a pole. It's the sort of thing you see done all the time, so there's probably a reason for it (I jest, it's to provide a channel for the milliput to get pushed into, and will also form a handy neck on the cast head that can be trimmed down to the required size) 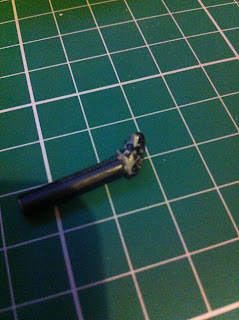 Many failed attempts with Blu Stuff later, such as attempting to cover the entire head and cut the Blu Stuff into a two part mould (for some reason I was expecting it to dry to a rubbery finish, but be warned, it sets pretty firm): 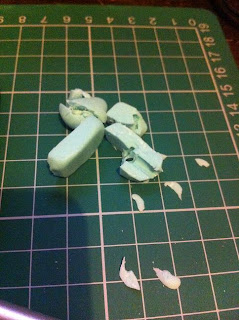 we have the first half of our two part mould: 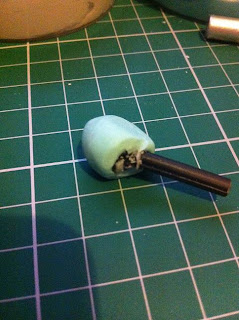 I had it  end around the crest for ease of removal later. After some careful cutting to tidy up the edges and put in a slight slope to help align the two halves of the mould, we have this: 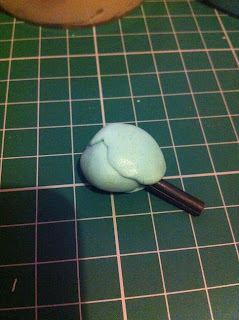 An incredibly unpretty mould. Looks aren't everything though: 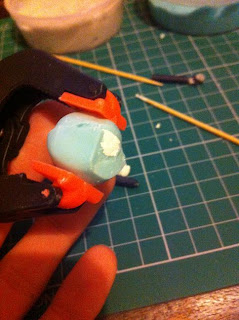 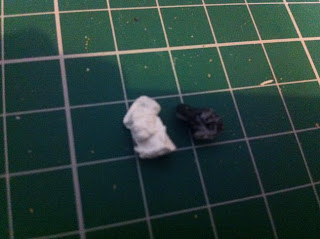 As it works! The pictures pretty much as out of focus as a picture can be, so you'll have to take my word for it. Now it's just a case of cranking out some more of these and cleaning them up before I start working on push moulding some Lannister Lion shields, and then it's go-time on Lannister House Guard conversions...

I was also going to write an aside on my plans for my Ice and Fire project, and how I see the composition of each House's forces going, but I think that this post is already long enough that it  might be an idea to save that for another day...
Posted by myincubliss at 20:52