A short essay on self-control and focus

Me, not long ago: right, I’ve got my projects set for the year, now to scratch that cyberpunk itch with some Reality’s Edge. 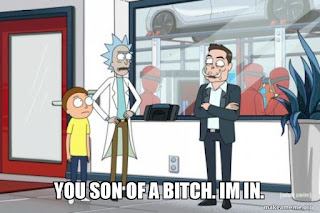 So now we have this: 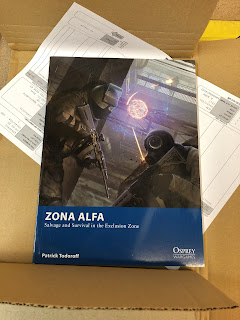 Initial impressions after a quick flick through are good - nicely thematic, simple enough to get into quickly but not suffering for it, with lovely presentation that’s the standard for an Osprey rulebook. I read an interview with the author this week where he said something along the lines of ‘I want to make games where afterwards you talk about the battle rather than the rules’, which I like a lot...

As well as this, obviously I grabbed a copy of the new Mortal Realms partwork, as £3 for a bunch of conversion fodder was too hard to pass up! 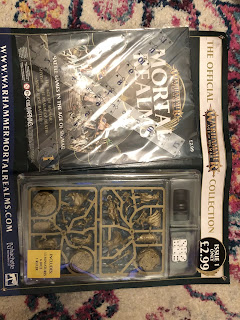 This does however take the Tally down to:

Excitingly, my D&D group is back to playing, after taking a hiatus for the birth of my son, and our DM has been making some upgrades in the interim... 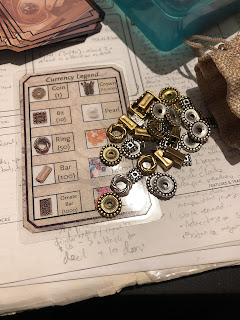 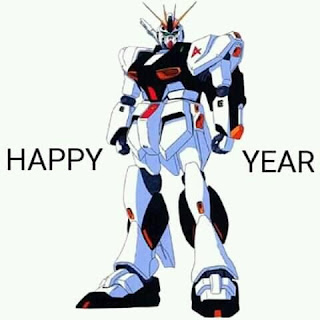 
Happy 9th Birthday to this blog! There have been times I've been tempted to give it up (due to factors like the increasing difficulty to make posts from mobile devices more than anything else) but I'm glad that it's still around!

As is traditional, here is a look back at the year that was...

Thanks entirely to an eleventh hour effort as detailed in my last post, the Tally is ending up in the positive for the second year in a row (also ever).

Whilst I may not have painted that much, I also didn't buy much either! I may sell some more backlog miniatures next year to fund splurging at Salute (having missed it last year), so who knows whether I can make it three years in a row...

So, a pattern has emerged - for the last few years, I have tended to paint around 50 miniatures a year!

19 this year, the fewest since the blog began by quite some margin. As ever, Zomtober was a major pull in getting myself painting and posting! The birth of my son is the main factor in this - I managed 32 posts the year my daughter was born, but two children are an exponential factor, as anyone with children will know! As my daughter got older, we settled into a bedtime routine that allowed for Daddy to have hobby time once she was in bed, so in the next couple of years we may hopefully return to higher levels of productivity!

So, not my most Challenge focused year, but then again it never is! I tend to think of the Challenge as something to guide me when I'm seeking inspiration (hence pulling Tabby out of the painting queue to add another to the list of painted Nextwave members) rather than a routine or stick to beat myself with...

Some people might argue that I should abandon it altogether, as I rarely hit many of my self-set targets, but where's the fun in that?


Projects (according to last year's end of year post)

A couple of enemy groups finished, with the next one already undercoated and awaiting their turn on the painting table. I got somewhat sidetracked trying to convert additional models for the Traitor Guard, which when I couldn't find heads that I was happy with stalled the whole project. Plan for 2020 - just crack on with them!

A single wildling. It's odd, this is the project that I find myself thinking I'd like to do things for when idly musing, but it hasn't seemed to translate into finished miniatures. The thirty odd undercoated wildlings sat on my desk might be a daunting roadblock to that though... we'll see if I pick up some of the Fireforge Northern chaps at Salute though, which may jumpstart it again...

I managed to paint a Jedi for May the Fourth and a single engineer, which is double my usual annual Star Wars output! We're currently re-watching all the movies in preparation for going to see the new one, and I've had a hankering recently to go back and read the Darth Vader / Doctor Aphra comics, so who knows if that will translate into enthusiasm for painting...

Zomtober is the thing that gets me posting without fail, so I'll pledge now to do it again in 2020! Maybe I'll even go back to my set of work in progress rules and give them another pass over (although they stalled last time because I started overthinking things and ended up trying to completely rebuild one of the core mechanics...)

The Kickstarter showed up the week my son was born, so plans to paint were somewhat delayed. The expansions have also since been delivered, so I've got plenty of material to be working on!

Back Burner
Necromunda - nothing this year.
40K - a Howling Banshee, hopefully some more odd miniatures here and there next year. There's a Sister of Battle sat on my painting tile currently for testing a paint scheme out on, so if that turns out pleasingly I can theoretically work my way through the rest of the backlog all the while resisting the urge to buy the new miniatures when they come out!
Fallout - nothing this year
ROTPOTA - As is now a long-running joke, and I've said it before, but maybe next year is the year I finally finish prepping the apes... 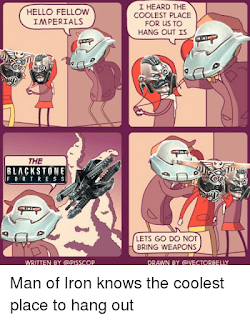 Still looks cool, still want to paint and play it. I'm fairly impressed at myself having not bought any of the expansions yet too. Maybe I'll treat myself if I manage to paint 100% of the miniatures in the set... 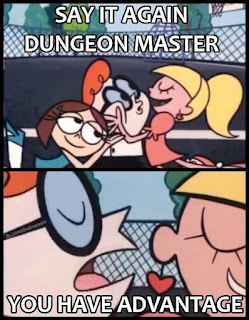 A lot of the miniatures I paint when the fancy takes me seem to be generic fantasy monsters, so I thought I should probably add Dungeons and Dragons to the projects list! A couple of related items have been added to the Challenge to tie into this, as you'll see later on... 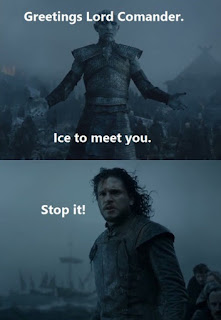 Maybe if I break the undercoated Wildlings down into smaller batches and tackle them a little at a time I'll get through them... Then again, maybe I should focus back on adding to my Starks and Lannisters with the intention of making them playable forces. And then finish the rules. 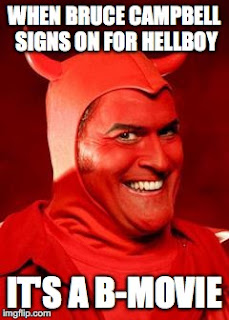 'play a game with painted miniatures' is staying in the Challenge this year, and this is another viable contender for ticking that off! The (admittedly first world) problem with having backed the Kickstarter for this is that there is an absolute shed load of miniatures with it - I figure if I polish of a couple of hero types and then batch paint all the frog chaps that isn't an insurmountable goal...

I pledge to do May the Fourth again this year at the very least. Re-watching the prequels in preparation for seeing the new film gave me the urge to paint some battle droids, but I've screwed the lid down on that for now, as starting a new time period in a project is too much even for me! Although I could just do a mini project, Grievous' abduction of Palpatine from the animated Clone Wars series, hmmm... 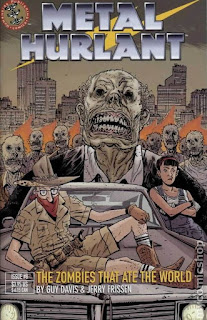 Zomtober is a given. If I find any bargains on the Walking Dead miniatures at Salute that might influence what the theme of this year's entries will be... 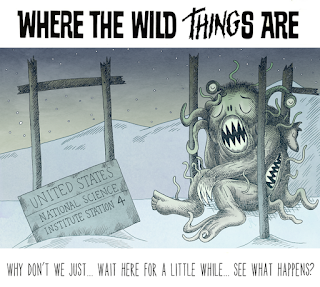 I need to find a suitable dog head, that's the roadblock between me and motivation on this project. If I can find that, then I should have all of the bits I need to convert a couple more medium sized Things, and I've got a MacReady miniature already (that came in my Christmas stocking a few years back - long enough ago that it must have been pre-children, as I don't think I've had a stocking of my own since then!) 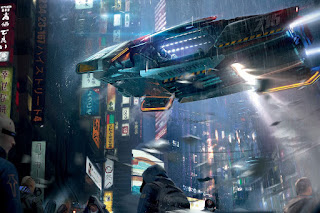 I've had a real hankering for Cyberpunk recently. It might have been kick-started by watching Alita, and I'm V excited (pun intended) for Cyberpunk 2077 next year although it's actually this year now! I got a review copy of the rulebook, and whilst in my mind I immediately began envisioning a huge project where I built a whole dystopian cityscape, more realistically I'd settle for painting a couple of suitable miniatures and maybe a little piece of terrain or two to start. If anyone has a blister of Bishoujo Senshi (sp?) from Rezolution in their lead pile that they would be happy to trade off let me know!

Backburner:
40K - I'm not committing to painting an army or anything, but as and when the fancy takes me I'll hopefully ad the occasional model to my Inquisitorial Warbands (maybe I'll even get round to finishing some of the Inquisitor conversions that have been sat half finished for the best part of a decade...)
Necromunda - no concrete plans, bu I still love Necromunda too much to write it off entirely...
Fallout - Weathering is very soothing, so in between other things I may squeeze in the occasional Fallout mini. Last year, I was tempted to dig out the Mass Effect project minis, but didn't get very far with that either...

So, I've got plenty of old things to finish (there are almost certainly still miniatures sat in the painting queue that were undercoated before this blog began), and as ever I've carefully phrased some of the challenges to allow me to weasel my way into a loophole ('paint all of the miniatures in a boxed game', for example). I've already stripped something to be repainted (as I'd originally hoped to cross that off of the Challenge list last year but ran out of time). In hindsight, I should have posted my WIP pics of my Thing conversions last year on here rather than Instagram, as I could have crossed that off too! 52 minis and ending the Tally in the positive are always a doable target though I think...

But wait, what is this Monstrous Alphabet Project you speak of, the more eagle-eyed readers cry. Over the last few years, I've painted a variety of monsters just on the off-chance I ever get round to running a D&D campaign, so I thought I'd turn it into a mini challenge and see if I could paint at least one thing for each letter of the alphabet. I'm only counting things with an actual Monster Manual entry, nothing from the appendices or NPC lists (sorry Giant Centipedes and Cultists!)

Going back over previous blog entries, the Monstrous Alphabet currently stands at this:

A is for
B is for
C is for
D is for
E is for Elemental (More than one)
F is for Flameskull
G is for Goblin
H is for
I is for
J is for
I is for
L is for Lich
M is for Mind Flayer, Myconid, Mummy
N is for
O is for Owlbear
P is for
Q is for
R is for
S is for Shambling Mound, Scarecrow, Skeleton
T is for
U is for
V is for
W is for
X is for
Y is for
Z is for Zombie

So, plenty of room to work with! I'm not looking forward to Q though...