Busy enough that I've missed my traditional year in review posts, the blogs second anniversary, as well as a million and one other things. Despite the lack of posts for a couple of months, the blog seems to still have gotten some traffic, so thankyou and apologies to everyone who visited while I was away. But hey, let's play catch-up now!

Abridged 2012 in review - the tally ended up at 68 vs 171 = -103, so perhaps the less said the better (although it isn't as bad a position as the previous year, so hey, small victories). And yes, I still haven't finished painting a miniature since moving house. But that's not to say I haven't done anything hobby related, just not a great deal...

As I'm getting married this year, there can be no new projects started, and I should probably focus on just painting miniatures that I already have. We'll see how that turns out, but it's good to get the intent down in writing surely?

And thus, the official list of projects is as such:

This is my Nurgle warband as it stands: 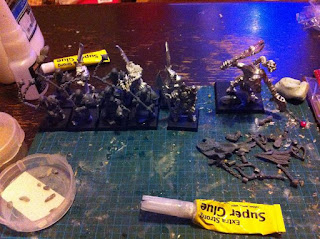 Pretty much ready to go with the exception of a Spawn. As previously mentioned in this post, my plan is to convert a Spawn inspired by one of my favourite old conversions, with the body of the original Beast of Nurgle. Handily, I recently managed to acquire this: 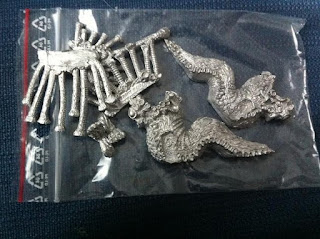 So all I need now is a suitably old-school looking Chaos Warrior to hack in half and then I'll be ready to actually start painting them! I'm quite fond of the old Nurgle warrior with a horned helm and bulbous sword, but they don't seem to turn up on eBay when I want them... (hint, hint)

Admittedly, I did also roll up a Slaanesh warband, which I planned to convert from Dark Eldar miniatures (Lelith Hesperax conversion for champion, Wyches as the basis for warriors and Wracks as the basis for Chosen), but the price of that little warband would be be obscene (based mostly on having to buy a box of finecast Wracks) for the number of miniatures I'd actually use, so that one may have to go onto the backburner...

I've also been making some Chaos terrain to use for Path to Glory, but that's not finished yet, so I'll save that for another post...

Knight Models Arkham City miniatures are lovely. Just lovely. So lovely that it spurred me to get round to playing Arkham Asylum. And now Arkham City. My lovely young lady ordered me a bunch of the miniatures for Christmas, which alas are still yet to arrive, so in the meantime I've been buying magazines to get batmobiles and stripping heroclix: 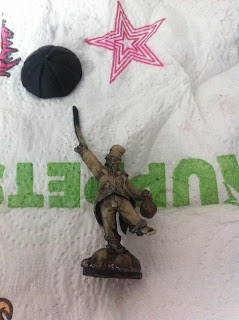 As lovely as the Knight Models miniatures are, I'll still be using heroclix for a number of characters, as a) I already have a bunch; and b) in some cases I prefer the comicbook character designs to the Arkham City ones (Scarecrow, for example - as kooky as the computer game design is, I think I'll stick with an oldschool look..)

I still plan on doing something along these lines, although the large themed Undead and Empire armies may have to wait in favour of painting a Slayer or two here and there in between other projects. I had a dig through my box of Slayers the other day to see which sculpts I was missing, and discovered that while there are a few varieties left to collect, I also have some that aren't listed in the 'Collecting Dwarfs' book: 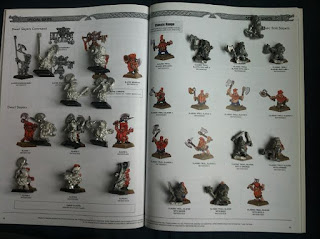 For example, both the musician and the standard bearer are different to the one in the book, as well as a couple of Slayers looking like variations of the ones pictured (the ones next to the picture rather than on top of it)... And don't worry, I have more Slayers than this, these are just the basic Slayers (although if anyone has any I'm missing and fancies a trade, let me know!)

Gotrek and Felix may also get painted at some point, but then I'd have to paint some Skaven, and buy a copy of Warhammer quest for obscene amounts of money to get the dungeon tiles and cards...

Although I'm still planning on getting round to painting enough figures from the classic trilogy for some skirmish gaming, I'm also quite taken with the idea of running a game recreating Grievous' kidnap of Palpatine - I've already got the Knight Models Grievous and Magnaguards, plus my Christmas Stocking had this: 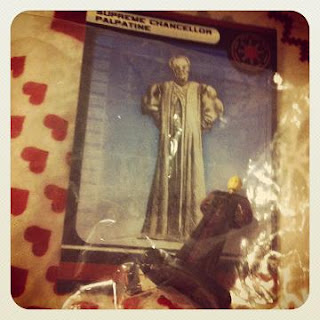 I've got a WOTC Shaak Ti squirreled away somewhere, so all I'd need would be a Roron Corobb and a Foul Moudama and I'd be ready to go - and yes, to pre-empt any hardcore nerds asking where's Roth-Del Masona and B'ink Utrila, I'm basing it on the animated series canon directed by Genndy Tartakovsky, because I think it's cool. So Ner ;)

On the Star Wars front, I'm also now the proud owner of a copy of the Star Wars: X-Wing game, so I had a dig to see if I had any ships in a useable scale and came up with these: 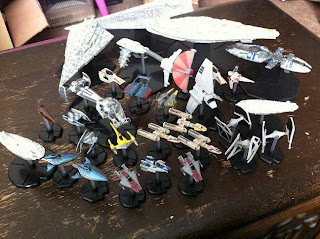 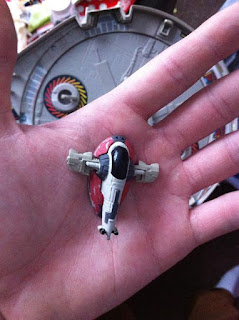 So I'm sure something can be done with all this...


Other bits and bobs:

Halo, ROTPOTA and the zombies project aren't forgotten about, but I have no specific plans for them at this point in time. The Halo project is ready to go for PVP games, so I might start painting some Flood or Covenant if the mood takes me (aka when I get round to playing through Halo 3, ODST and Reach...). Blood Bowl is still on the cards, as I could finish my team with a single day of focus, but don't expect that to happen any time soon. Rob's painting Warmachine stuff at the minute, which whenever he tells me about it tempts me to dig out my unfinished Mercenaries... or my unpainted Cygnar... or my unbuilt Cryx... Tavo's threatening to run an RPG, so my attention could swing back round to the generic fantasy miniatures... Uncle Johnny's cleaning up a dozen or so epic titans at the minute, which is a pretty tempting prospect too... Talking of Uncle Johnny, we managed to get a game of Battle for Armageddon in a while back: 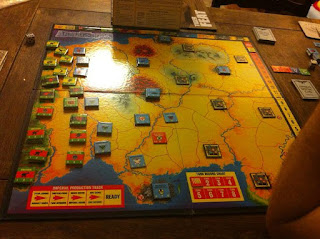 Despite a number of tactical blunders on my part (going against canon with a misunderstanding of the rules led to my Gretchin being at the back - I assumed that I'd be able to punch a hole in the Imperial lines by throwing all my good stuff forward from the get-go, not realising how debilitating attrition would be...) 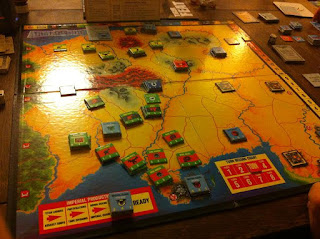 Starting to get my head round how the game worked I started pressing forward... 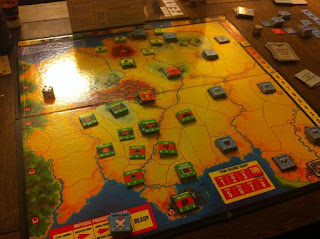 And forward, grinding through hives as I went... 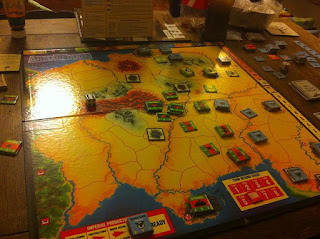 At which point, despite a couple of stupid bold death or glory strikes that left me losing a couple of vital counters as they either smashed face first into John's defences or were cut off from supply... 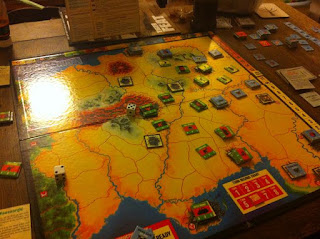 I managed to pile enough counters around the last hive to topple it with a few choice dice rolls, winning me the game, and proving once again that whenever John and I play a game the stars seem to align to allow me the right combination of luck, skill, handsomeness, modesty, and sheer jamminess.

Right, that's probably about three months worth of posting in a single post right there...