As previously alluded to, I’ve also knocked something else off of the checklist!

Loads and loads of lovely crates and food supplies - a set from Bad Squiddo and one from Zealot Miniatures, but both sculpted by the talented Ristul’s Creations so they all go together perfectly: 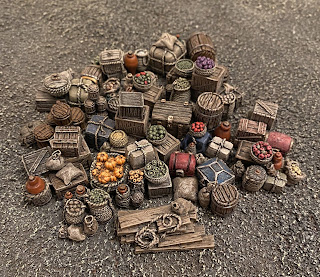 Technically there’s an extra piece here, as I had a duplicate piece and one missing, which was swiftly sorted once I’d noticed - I was looking for the piece with pumpkins on and couldn’t find it anywhere; I’d assumed my children had had it away, but on further investigation discovered that I had two of one of the sculpts, can you spot which one appears twice in the above picture?

So, RoSD scenario 1 checklist is tantalisingly close to completion:

In other news, while I might be sworn off GW currently (Cursed City made me reassess my relationship with GW, and I realised that I’m not the target audience, and that I was still buying White Dwarf despite not really finding anything in it useful or interesting except for a modelling article, so I figured I should just cut ties for now and focus on more indie stuff) I’m apparently not sworn off a bargain: 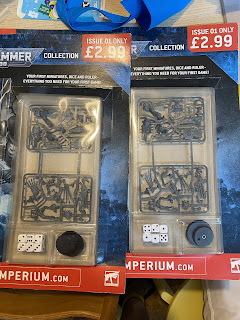 Two packs, after a miscommunication, but I’m sure I can find a use for another space marine and robot lad.
Thanks to previous sales, the Tally is still looking fairly healthy:
19 vs 8 = +11
Although it’s my birthday on Monday, so it might not look that healthy for long…
Posted by myincubliss at 09:21 1 comment:

So, having two weeks off of work as usual this time of year (as my wedding anniversary and birthday fall in the same fortnight period) to take a break from looking at checklists about Operational preparedness for Christmas I… pulled out my checklist of things I need to finish before I can play the first scenario of Rangers of Shadow Deep. Then, presumably subconsciously rebelling against the tyranny of checklists, I of course finished something that wasn’t on it: 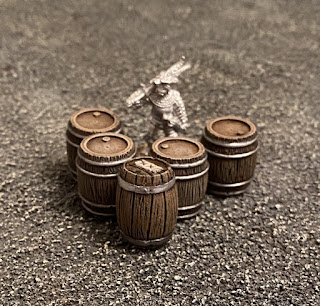 Barrels! The four at the back are two thirds of a pack from Fenris Games (excellent product, excellent service), the other two being saved for any future barricade scenery building needs, and the front one came with the same lot of bits from Sippin’ on Paint Water as the previously posted crates and whatnot.
So what’s next? You’ll be delighted to hear that my checklist rebellion was short lived and I knuckled down to knock something else off…
Posted by myincubliss at 23:36 1 comment: 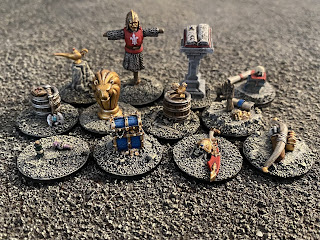 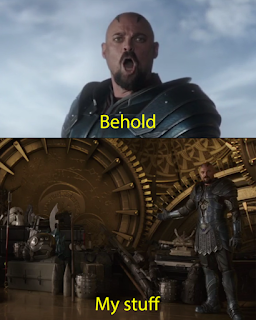 So, in order to play Rangers of Shadow Deep and Frostgrave, I needed some treasure tokens. A number of people have made some cool looking tokens that feature heaping piles of golden coins and whatnot, but flicking through the rulebooks for the two games you’re mostly likely to find a scroll, a small amount of money, maybe a weapon (or in the case of RoSD, you’re more likely to find herbs than you are a rune-encrusted axe of destruction), so I started rooting through my bits box looking for suitable odds and ends to make some slightly more sparse representations of claimable wealth.
The first one I made obviously ignored everything I’d previously planned and was a four foot tall solid gold statue: 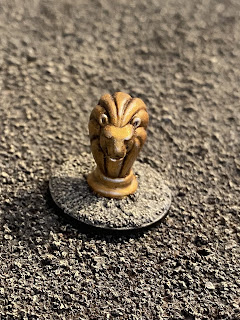 It started life as a Game of Thrones Risk Lannister piece, and gets a pass because the image of some poor thug having to lug that giant thing through the ruins of Frostgrave amuses me. I used the same textured paint on its base that I did on my trees, which for some reason looks terrible here.
I also picked up some of the official Northstar treasure tokens: 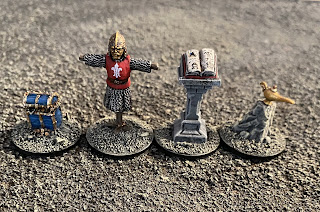 The little treasure chest because it was cute and cheap, the lamp because I think the genie scenario is great and want to adapt it for solo play, and the armour and book lectern because I didn’t have much in the way of grimoire looking pieces in my bits box. The armour stand got a transfer from an old Bretonnian sheet to jazz it up, and will also serve double duty as a bit of dungeon dressing for other games like D&D too.
I used a fine pen to add some squiggles and magical looking symbols to the open pages of the book (thanks live action Fullmetal Alchemist movie for inspiration) as well as trying to make it look like an illuminated manuscript which you can’t really quite see in this picture. There’s also a tiny cat paw print on one page, as occasionally appears on medieval manuscripts (presumably much to the chagrin of some poor ancient monk): 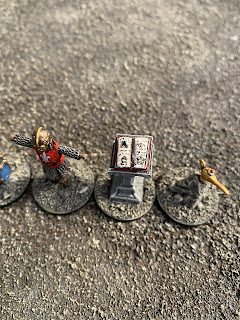 I also used some resin pieces from Zealot Miniatures: 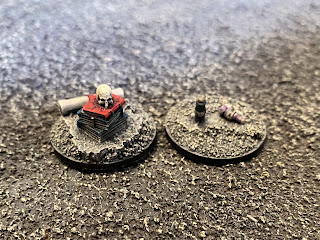 Tiny, but absolutely great. I put them on bits of cork to make them stand out a little more (especially the potion bottles, which would have gotten a bit lost if I’d just buried them in basing sand). Grimoires, scrolls, potions, check check check.
And then, the rest, which I tried to make as accurately multi-representative as possible: 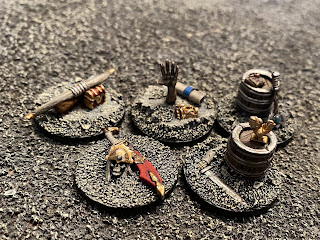 While I understand suspension of disbelief and using my imagination (being that we’re playing wizards with little metal men) I wanted to try and create pieces that could represent whatever you rolled, despite the randomness.
Clockwise, starting top left:
GW bow and quiver and a tiny Bretonnian treasure chest. The bow could be a magic weapon, or just scrap to sell if you rolled money instead. Maybe the chest is full of rare herbs, or a spell scroll instead? Works equally well for wizards or rangers to find!
One of my favourites, suited more for Frostgrave - the death mask is a piece left over from a (still unfinished) conversion I started years ago (at least ten?) using Dante as a base, the hand of glory is a zombie hand and the scroll is made from tomato purée tube foil carefully cut and rolled up, with another long thin piece wrapped around it and carefully superglued to make a tie. Gold, spells, magic items, all covered no matter what you roll.
A Renedra barrel with a Frostgrave pouch and an axe from a Mantic skeleton sprue leaning up against it. This one was made more with Rangers of Shadow Deep in mind than Frostgrave. Is the pouch the treasure, or the axe, or the contents of the barrel? Depends what you roll…
Another Remedra barrel, with a skeletal hand still clutching a sword (probably magic, that) and a solid gold chicken statue that started life as a standard top on an Atlantic Halflings sprue. Just an excuse to use that bit as a gold chicken, if I’m being honest.
Skull in a fancy and probably magical hat, next to an elaborately decorated sword from the Khorne Berzerker sprue. My only complaint is it’s a bit hard to pick up given it’s low profile.
I’m sure at one point I recall having made thirteen tokens, but there’s only twelve finished now so if it turns out my children have had one away at some point I’ll have to paint it and add it to the set later!
So, where do we now stand on being ready to play Rangers?
Truth being told, these were actually finished last weekend, but it took me a week to get the blogpost written, so I’m already about halfway to having finished the next item on the list!
Posted by myincubliss at 21:42 3 comments:

I mean yes, I know I was strictly focused on the last few bits needed to play the first Rangers of Shadow Deep scenario, but I somehow seem to have finished these instead: 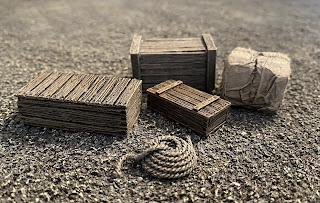 In my defence, the missing bit of scatter terrain arrived from Bad Squiddo and so I sprayed these at the same time to avoid wasting undercoat, and they were largely drybrushed to completion. 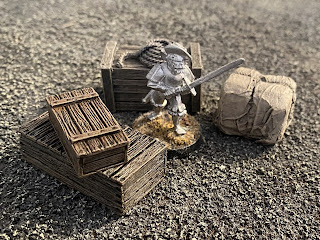 They (alongside the bucket on my well and a couple of barrels that are either half finished or didn’t get undercoated because they need a little green stuff love to fill some minor bubbling) came in a lot I won from the original Sippin’ on Paint Water blog many many moons ago - there’s a new one called Still Sippin’ on Paint Water here, but it hasn’t been updated in over a year now unfortunately, so I’m assuming it’s dead, which is a shame because look how lovely that coil of rope is!

So, next time: the actual things I need to finish painted!

…I go beep beep beep boop bop, to quote a song that my six year old regularly seems to have stuck in her head.

Just a quick post to show off what I received in my trade with Tales from Farpoint: 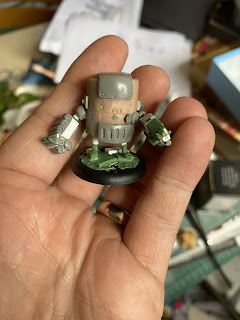 A fully sculpted robot! He’ll see use as a warbot or perhaps a bounty in Stargrave, and I can’t wait to paint him! Although my children seem keen to get their hands on him too…

The Tally also looks much healthier this week too, as something I listed on eBay weeks ago finally sold, partially offsetting the money spent on this year’s Hellboy board game Kickstarter and leaving the Tally looking like this:

What next? I’ve still been chipping away at the last few bits needed to play the first Rangers of Shadow Deep scenario, but painting time is rare currently - I had planned to get some done last night while watching a movie, but when the movie is Dynasty Warriors you can’t take your eyes off it (or keep them open, at one point, but that’s more to do with tiredness than the quality of the movie). Also, I added to the pile of ‘last few bits to do’ with some more lovely resin scenery, because I couldn’t help myself… 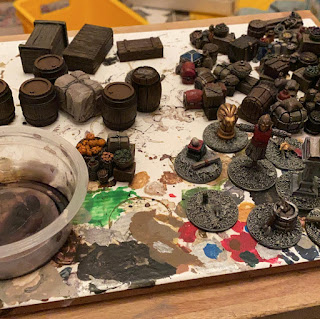 Oh, and I might have challenged some pals to build Warhammer armies, as the announcement of Warhammer the Old World got me tempted, and the as yet unannounced release date is far enough away that it feels like we might actually show unprecedented levels of focus and finish the project in time, so if anyone has any old Skaven in their trade pile let me know…