Only a week after the actual event - did I mention that I'm not a fan of the Blogger app being killed off?

The night before Salute, I made a meme after seeing that Troll Trader were running their usual 'first 50 people spending over a certain amount get a goody bag': 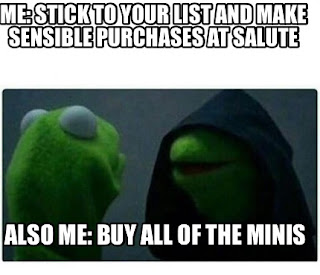 My first stop at the show was their stand, where I bought the Collector's Edition of The Walking Dead game from Mantic, so I guess Dark Side Kermit won there... 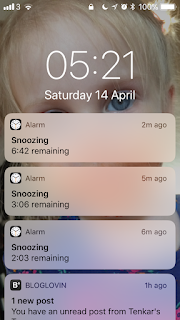 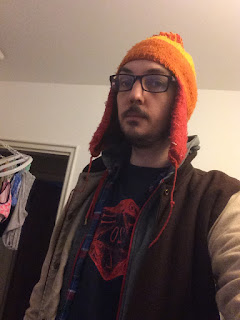 The usual Salute outfit of Jayne hat - this year was unseasonably warm though, so it spent most of the day in my bag, leading to complaints from my companions that they then couldn't find me.

My phone is alas on the way out, and doesn't hold charge as well as it used to, so less photos than usual, presented in almost no order: 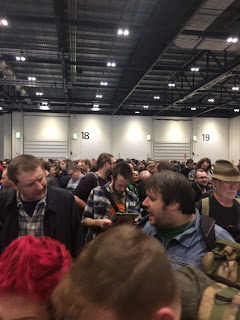 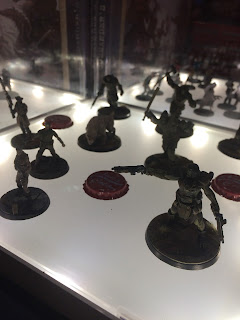 I like them, but at a larger scale than my existing stuff, I'm not sure if I'll get any (he says, setting up for future 'well, although last year I said...' posts. Wait, didn't I say last year that I wasn't going to get The Walking Dead?)


One of the thing's I was most excited to see was Mantic's upcoming Hellboy kickstarter - alas, there was only a handful of preview miniatures, and no game content, but look how pretty they are! 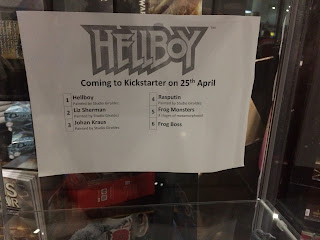 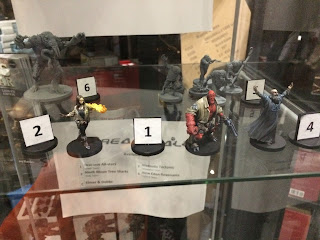 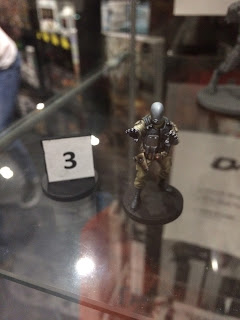 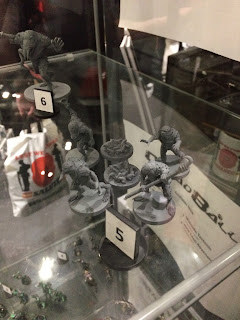 Particularlyexciting is that it looks like there's a mechanic for the frog monsters to evolve from little swarms up to big gribblies...

There was a rather large and nice Star Wars Legion table: 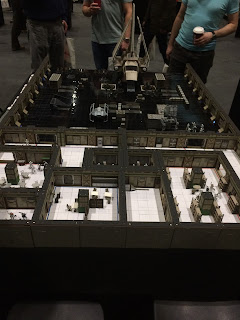 (read again my comments about the Fallout game re: larger scale, me not investing)

Mantic were running a paint and take table, so I tried my hand at knocking out a Star Saga Scientist: 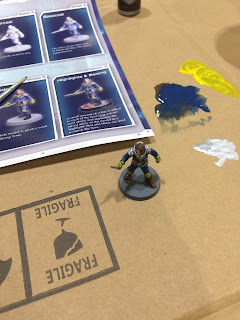 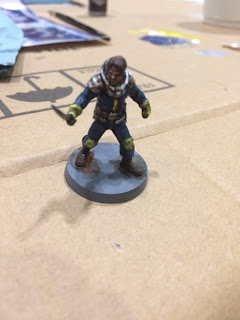 Not bad for half hour with a large brush!

I'm not going to count him as painted for the Tally just yet, as I think I'll repaint his face (as it took a couple of goes with the brush I had to get it to this state of acceptability, but could definitely be improved), as well as potentially changing the colours of some things like his kneepads, maybe adding a Vault number to the back of his suit so that I can use him for Fallout, as well as rebasing him!

I managed to snap some pictures of Fireforge Games' upcoming Fantasy Northern troops, and they're rather lovely: 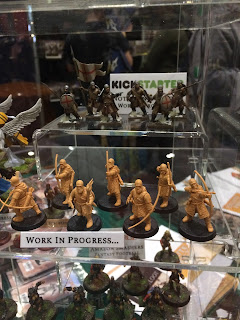 I wasn't sure how they'd look in the flesh, as pre-production renders seen online can hide a multitude of sins (Wargame Factory zombies being one of the most well-known examples of this) but they look like they take paint pretty well: 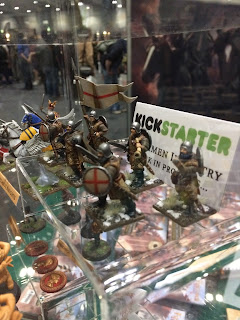 I think with some custom shields they'll make ideal House Bolton troops for my Game of Thrones / A Song of Ice and Fire project, as well as providing some additional bits for House Stark kitbashes... 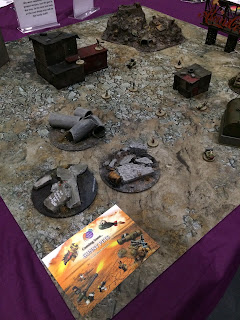 I took this photo of a Bad Squiddo table to use as an inspirational image for future scatter terrain building, as I think that those rubble and broken pipe pieces look great! 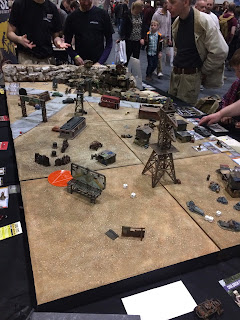 This is an awful picture of a lovely Crooked Dice Post-Apocalyptic table - I think they were running two games on the same table, one with plant zombies and one with dune buggies? 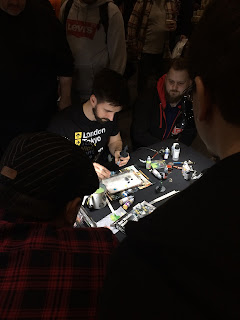 Got to see Angel Giraldez painting again - insert the now traditional 'so handsome, so talented, it just isn't fair' comment! 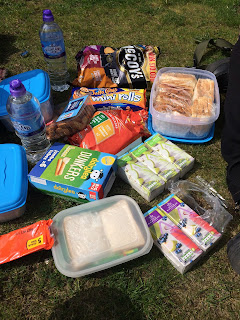 Joe, our DM, is a feeder. This is fine with me. Picnic lunch with some old friends that I hadn't seen in a while, including Ciarron, who long-time followers may remember from a Salute post a few years back where we both got super excited about the Batman Miniatures game, bought a bunch of stuff and vowed to play. We still haven't. 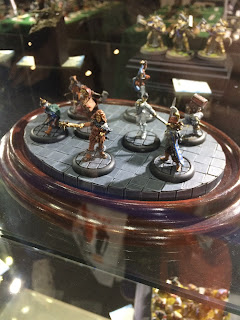 Someone had painted up their Westfalia Northern Mercenaries kickstarter and entered it in the painting competition! I really should paint mine...

Now, the real meat of any Salute post - the loot! 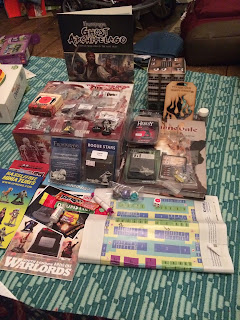 Also, the Mantic Walking Dead game, plus a selection of bits from my goody bag, like a couple of rulebooks, a cardboard building that is the perfect size for 1/144 Gundam models, a stencil, some weathering powder, a bunch of beer mats and a handful of sweets!

Fun fact - after Salute, I went for dinner at my Mother-in-Law's, where I showed my daughter the miniature that I had painted that day, which then vanished without a trace. Several days later, he turned up in grandma's bag...

Adding everything up (and factoring in the things that sold on eBay just before the show) brings the Tally to:

I'm thinking that I might have to reconsider my 'board game pieces don't count towards the Tally for acquisition' when some of the games come with what are clearly miniatures, as they Tally would look a lot less robust after buying The Walking Dead game! I'm selling some more bits on eBay in preparation for the aforementioned Hellboy Kickstarter, so expect to see the Tally distort even further...

In other news, the sun briefly came out in the UK, and the sound of rattle cans resounded across the land as we had that perfect combination, a warm day with no wind. Not me though, as by the time everything was sorted and my daughter was settled in bed it was ten at night, but I'm not one to let something like that stop me so I set about getting a bunch more odds and ends into the painting queue: 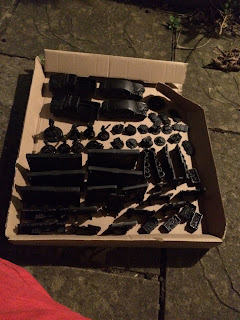 Top Tip: though you might think you've been very careful with your spraying box, in the cold light of day it usually turns out you've sprayed a black line onto the paving slabs in the garden.
Posted by myincubliss at 09:27 4 comments:

I Spy with my little Eye...

Another mini plucked from the painting queue because it took my fancy, this time a Copplestone spy-fi type for 7tv: 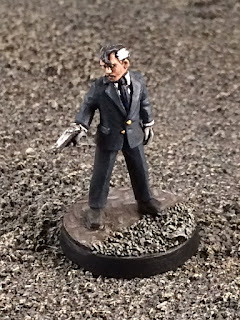 Not a lot to say other than that really... Nice sculpt, Dark Reaper basecoat for the usual reasons... 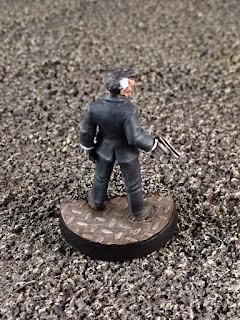 Not my finest facial paintjob, and unusually I painted his pupils using an actual brush rather than a micron pen: 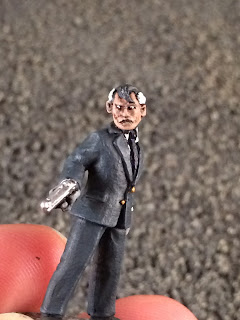 This is the first set of posted pictures taken using my wife's new lightbox. Better images mean you can see my painting better, which isn't necessarily a good thing... 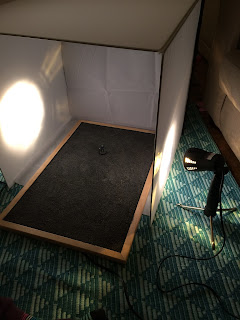 Despite the closeness of Salute, I also bought a miniature this week. A nice chap on one of the Facebook groups had listed a bunch of out of production Doctor Who miniatures for sale, so I grabbed the 'not-Rory' that Crooked Dice used to make that I missed out on the first time round: 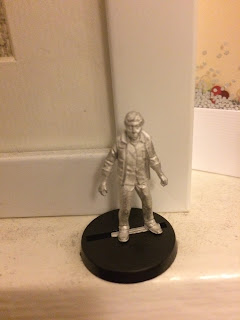 Also as it's Salute soon, my eBay auctions finished and some miniatures have gone off to their new homes, which leaves the Tally looking positively wacky:

Not to worry though, just think of it as pre-Salute buffer...
Posted by myincubliss at 23:22 2 comments: