The perils of stripping:

Note to future Olly from past Olly: next time you clear out your stripping pot, either stick to using the tweezers to fish bits out of the pot, or wear gloves, because a couple days after your hands start to fall off: 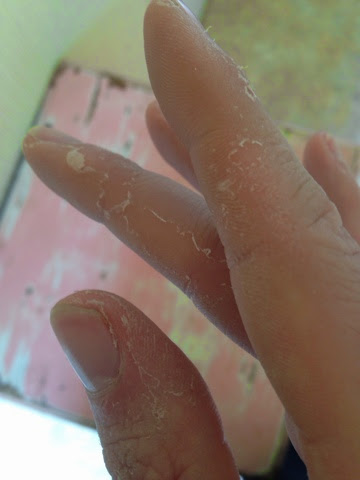 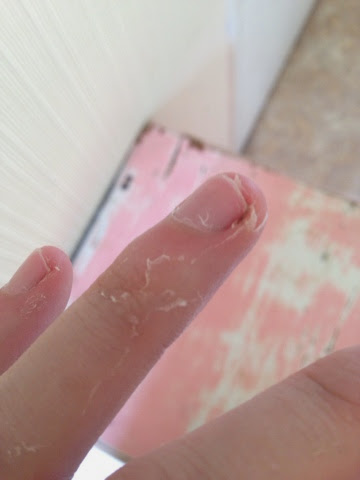 Well, I had been considering converting some Dark Vengeance cultists into Necromunda Scavvies, looks like I just got started on myself early...
Posted by myincubliss at 11:57 1 comment:

Delves in my stripping pot...

Having finally overcome my deeply ingrained (and generally unfounded) nerdrage, my wife and I have been catching up with Marvel's cinematic output (I'd previously only seen The Avengers

, having decried all comic book films as a comic book fan). We've been watching them in chronological order, and we're now currently halfway through Agents of SHIELD, waiting for Iron Man 3 and Thor 2 to pop up on Netflix! As tends to happen in these scenarios, I found myself with a hankering to recreate what I'd seen in (roughly) 28mm, and so duly procured a Marvel Heroclix Avengers Movie Mini Game

for the four sculpts within, with the intention to strip and repaint them: 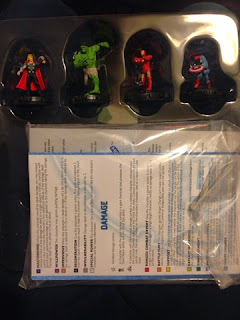 Which reminded me, some of the miniatures in my stripping pot had been there for over a year, so it was probably about time to clear it out before adding anything else to it!

So, so time last February (I thought March, but the Valentines cards in the background of the next picture would suggest otherwise!) I picked up a whole bevy of Batman Heroclix from Blue Rat Games with the intention of painting up a posse or two for the Batman Miniatures Game: 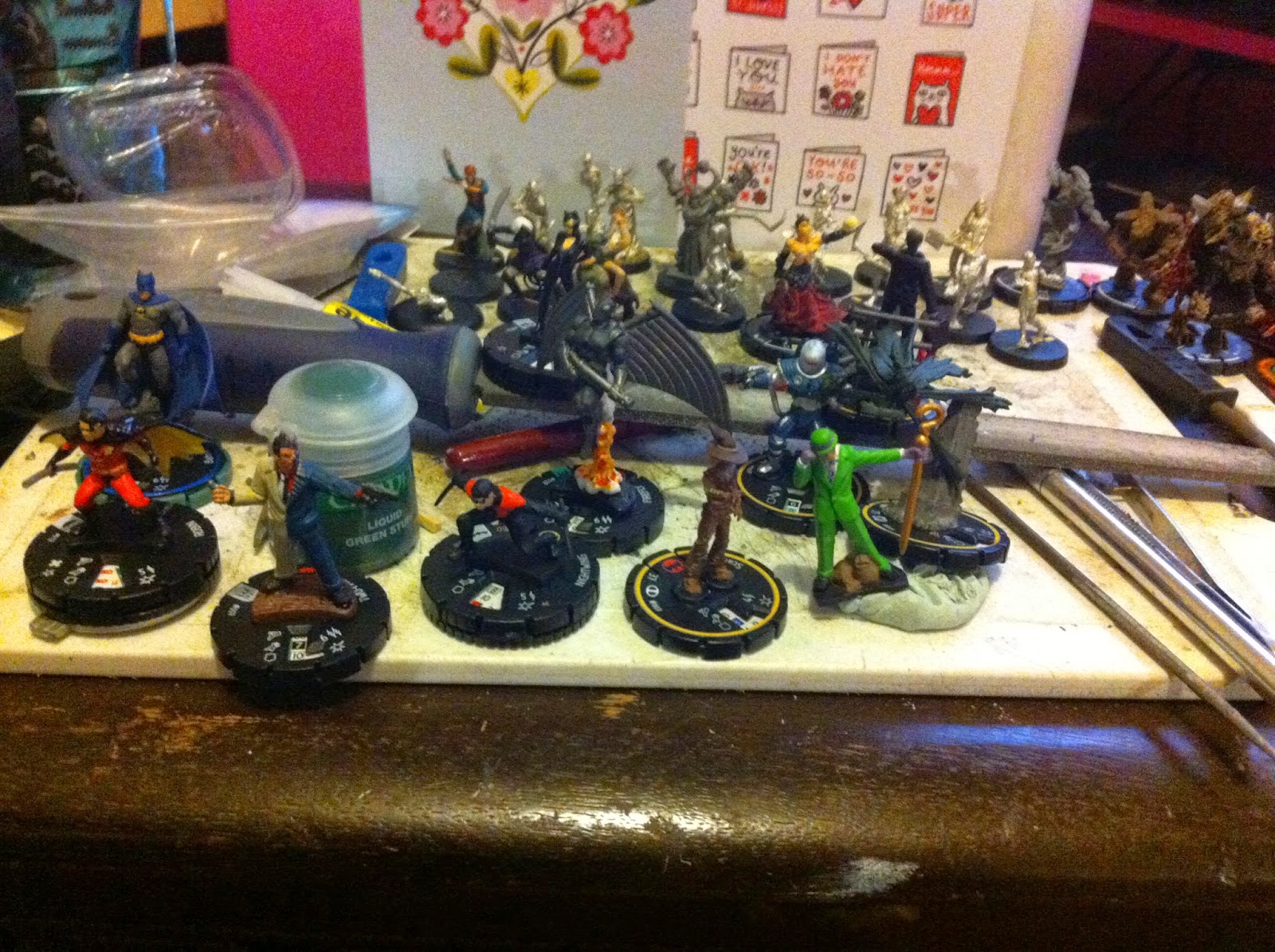 Including picking up one particular Two-Face figure purely for the fact that it came with a 1:1 scale replica of Two-Face's coin, which I (should I ever manage to get a crew painted) will use to make every decision whilst playing as Two-Face! 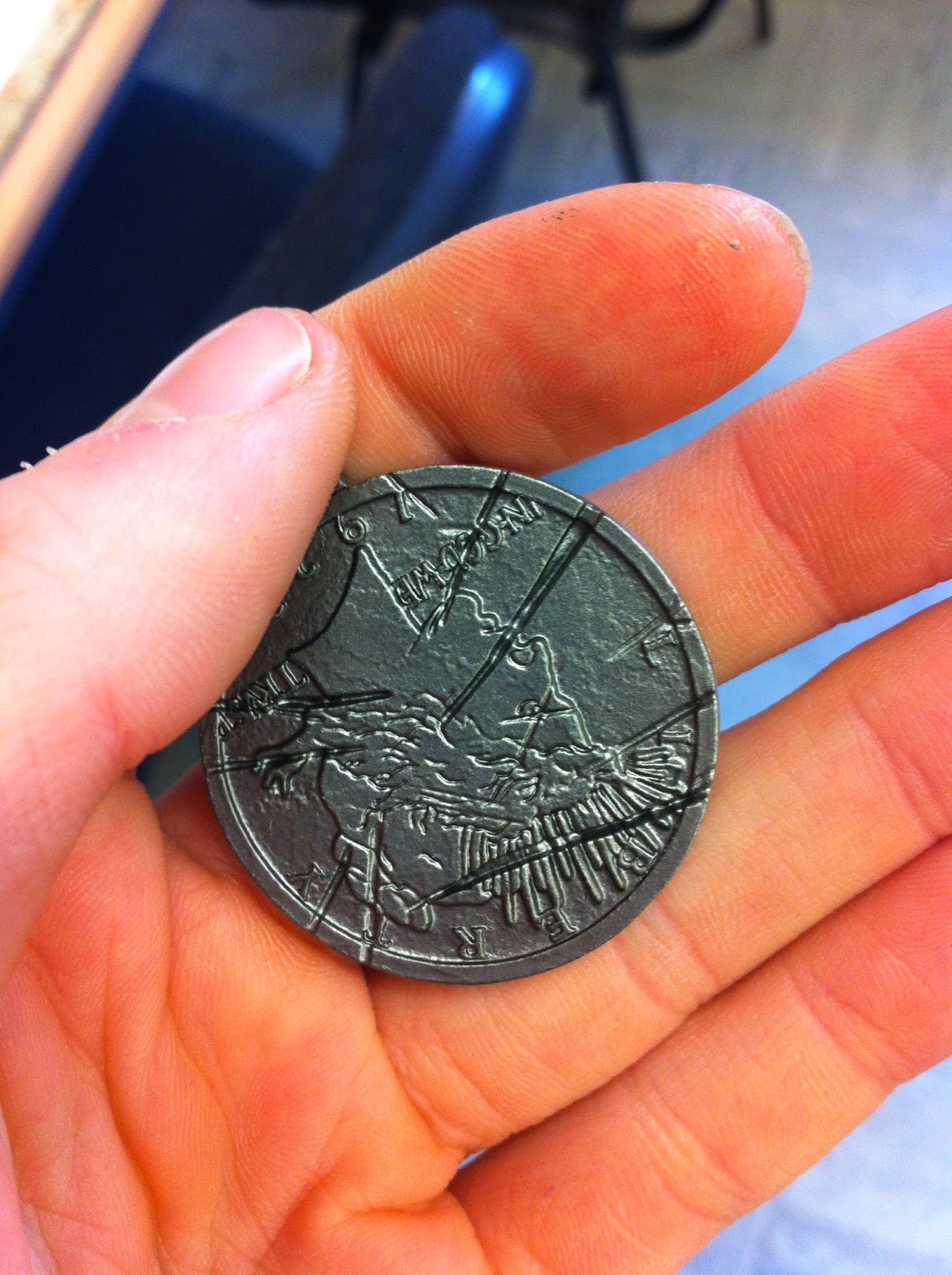 There are some nice little sculpts in the Heroclix range (although admittedly generally not as nice as the entire range of miniatures that Knight Models has brought out in the time that these have been sat in my stripping pot), although they are sometimes hidden under thick (and goofy!) layers of paint: 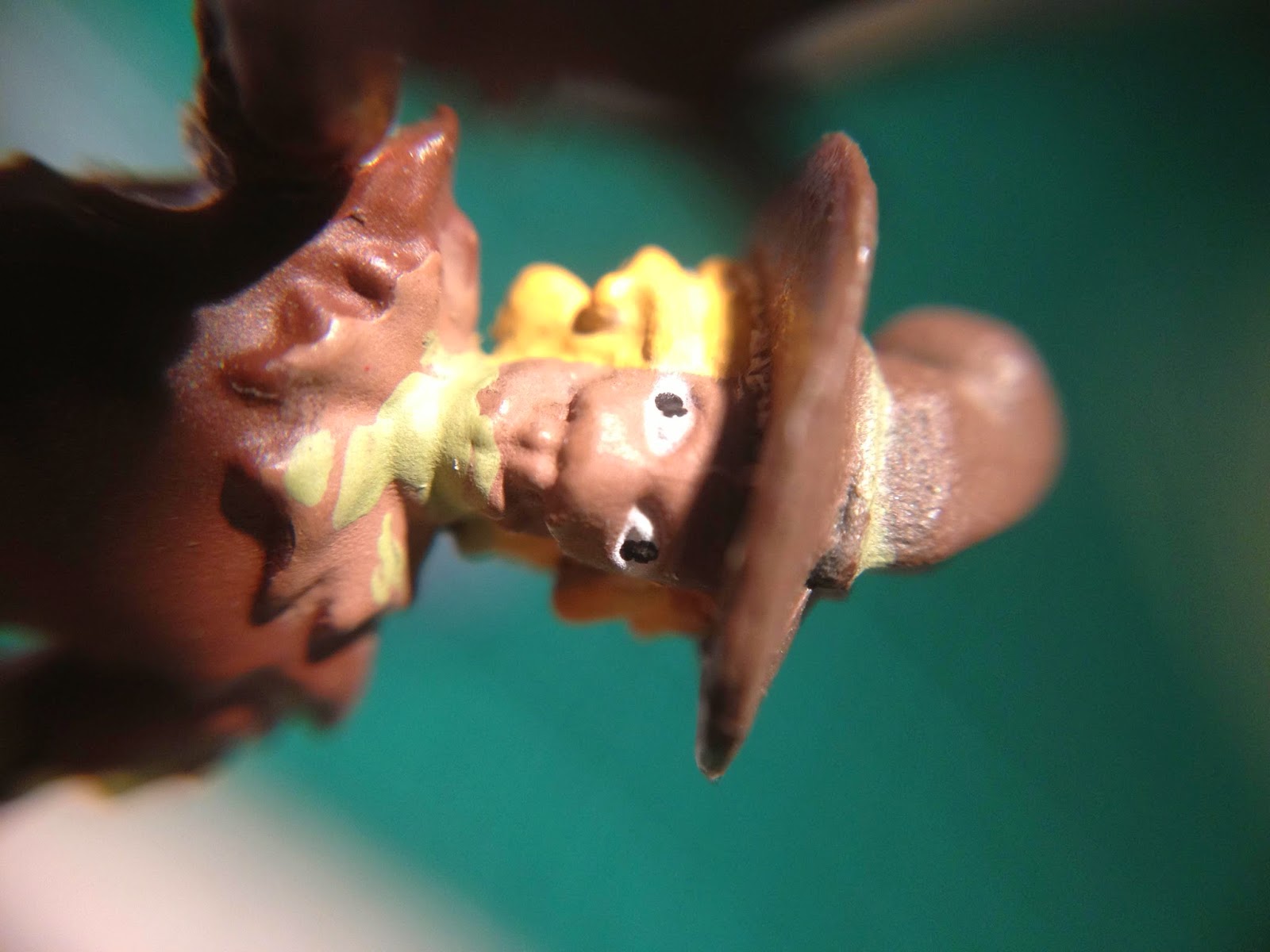 So, I attempted to strip them. Nail polish remover would absolutely destroy the plastic that they're made from, so I gave it a go in some Fairy Power Spray, which I'd read positive reviews of: 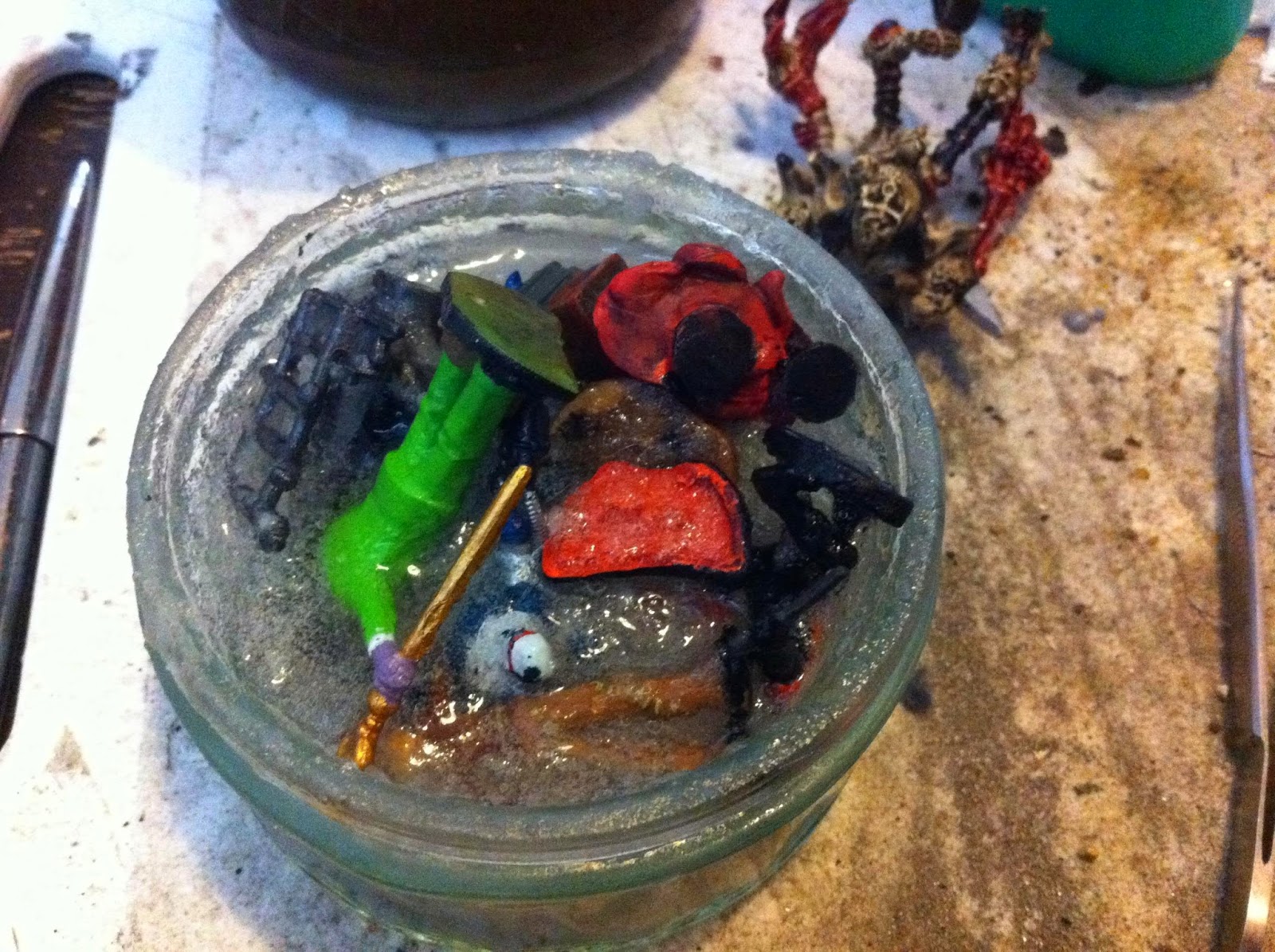 But nothing. Months of dunking, scrubbing, and repeating, and nothing. Frustrated, I dumped the lot into my usual stripping pot (of Surgical Spirit), where once more, they were dunked, scrubbed, rinse and repeat. Almost no change to the paint. What are they painting these things with?! As you can see, they've been in long enough that the glue holding them together has dissolved, but not the paint: 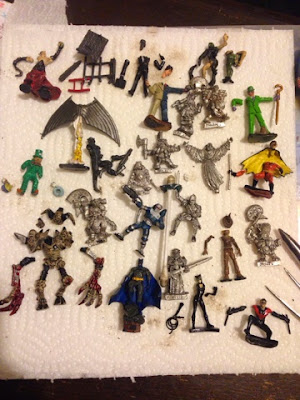 As well as the various Batman Heroclix, there were also a couple of Mage Knight sculpts that I fancied repurposing for the Dungeons and Dragons project (which I should really make a greater effort to get off the ground, what with the release date for the next edition having been announced and everythig); some Games Workshop Dwarf Slayers that you've seen in previous posts before their fragrant bath; the old Spirit Host ghost I picked up at Salute; Manfred, an old Fighter; and a mounted Eomer that I picked up as a potential base for a mounted Robb Stark conversion for the ASOIAF project.

Although I wasn't able to remove the paint from the Heroclix (which after another rinse off I'm probably just going to paint over the top of. Or throw into a fire.), they are now however exceptionally clean, and somewhat soapy smelling, leaving my stripping pot looking like this: 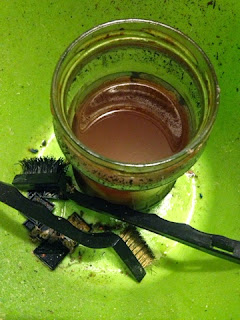 Into which have gone the Avengers from the start of the post, just in the off chance that their paint is somehow different from the previous releases...

Posted by myincubliss at 21:19 No comments:

Although work continues apace on getting my Nerdmarines to the state of a playable gaming force, a nostalgia driven ebay purchase arrived today: 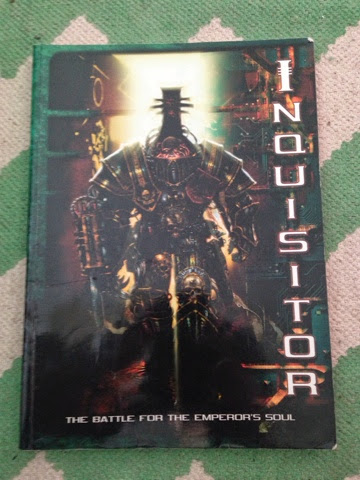 And led me to have a root around and dig out a Baggie of miniatures from my unfinished Witch Hinters army: 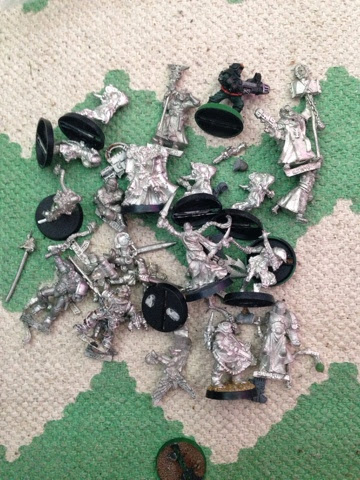 I say nostalgia driven, but that's technically not true - I had the rulebook many years ago, when it was first released, but never got to actually play a game, and ended up selling it as part of the great midlife crisis purge I had when I was 15 (oh, foolish youth, if only past Olly hadn't sold his copy of Necromunda complete with Outlanders and his bits box for something paltry like twenty quid...)
So, I wonder if anyone fancies some inq28?
Posted by myincubliss at 16:53 No comments:

One of the benefits of having a blog...

...is that sometimes people contact you out of the blue with miniatures that you need for your collection. I got one such email from a nice young man by the name of Greg the other day, and a couple of emails and the exchange of monies later, I now have Daemon slayer 3 taking a lazy bath in my stripping pot: 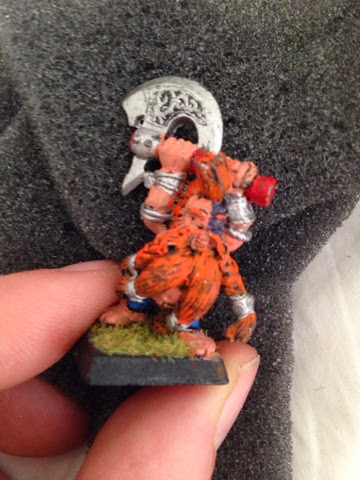 No change to the tally though, as since a chum of mine had stated that he was looking to paint up some Blood Angels as part of our 500 point 40k plans, I dug this chap out of my stripping pot to gift to him: 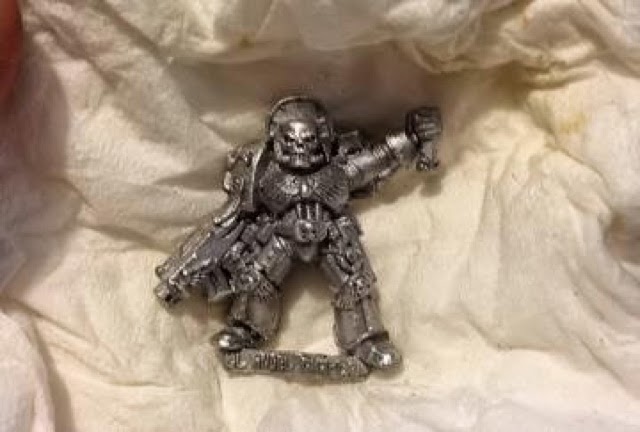 Missing his weapon top, but easily fixable!
So, one up and one down with no finished painted miniatures yet leaves the tally still at:
22 vs 35 = -13
Posted by myincubliss at 22:58 2 comments: