Trees, but make them creepy

So, the second scenario for Rangers of Shadow Deep involves ‘nest trees’, and while I could just pop some Halloween spiderweb on some of my existing trees, I fancied making something slightly fancier (that I’m still going to slather in fake spiderweb): 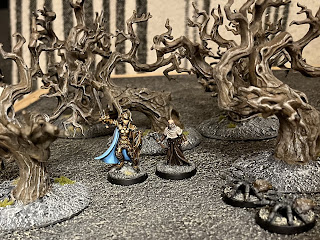 (Please note, I’ve not had a chance to play it yet, this is just a posed shot)
So, many moons ago I came into possession of what looked to be an Armies on Parade board that features some of the old GW trees. A little studio engineering later, I’d reclaimed them from the board to put to use again.
As they had previously been embedded into a board, it took some cutting and filing to flatten their rounded bottoms and make them suitable for basing in the same fashion as my previously completed trees: 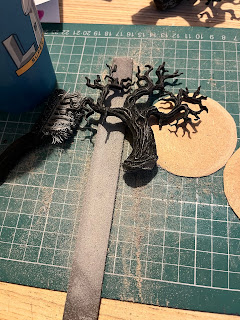 Fun fact, couldn’t for the life of or remember what I’d initially used to measure out my tree bases, but after trawling through old comments on Instagram posts I realised that I’d used the bottom of a pot noodle during Lockdown…
My favourite tree of the bunch is probably one of the bendy ones, that I cut and filed in suck a way as to look like it’s bent almost double by years of wind and weather.
Some Poundland filler was used to blend them into the bases a bit: 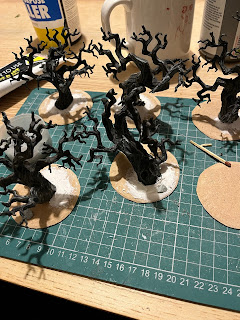 Turns out the textured paint I made way back when (on my birthday last year I believe) was still good, with a little rehydrating: 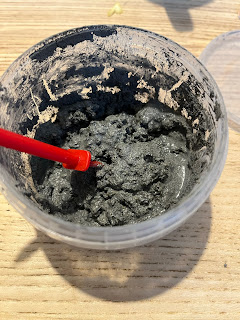 Then it was just a case of slathering it on with a glue spreader (which has since gone missing. I suspect foul play): 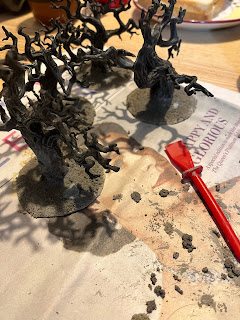 Apparently I didn’t take any pictures of the painting process. Rest assured, it was done quickly, using mostly Wilko sampler pots and heavy handed dry brushing (as well as a wash with some homemade dirty wash, as I’m not rich enough to use my limited supplies of Vallejo Smoke on terrain projects). Tell a lie, the base cost for the tree bark was done using a heavily diluted GW paint, which gave a mottled and unhealthy look. The Wilko tester pots are drying out a bit now, so some of the dry brushing went on a bit chalkier than I would otherwise have liked, but not so much that I’d go back and repaint them!
Then it was time to painstakingly apply moss and static grass: 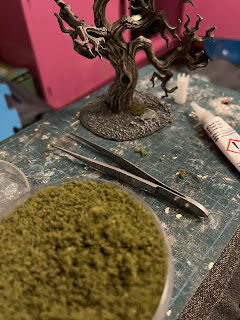 I went a lot lighter on the foliage than on my previous trees, as I envisioned also using these as spooky trees in a barren graveyard or similar, where lush verdant growth might look out of place. And with that, they were done: 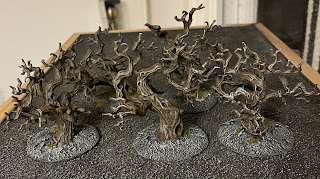 Five spooky trees! While the scenario needs four nest trees, one of the random encounters adds an additional one, so five is the perfect number.

The Tally also took a hit, as I ordered some minis from North Star using their Halloween offer, which apparently I forgot to take a picture of before ripping three open for cleaning and basing. I’d hoped to have them painted sooner, but unfortunately there was a pack missing from the original order, the replacement of which got caught up in the postal strikes and so didn’t turn up until the end of my week off of work…

Back into the red! I should be able to drag it back into the positive before the end of the year, unless Santa comes laden with minis…