...like Arabian daaaaays.... More often than not, they're hotter than hot, in a lot of gooood waaaaaaays! Ah Aladdin... except imagine Aladdin joined a cult and decided to menace Conan: 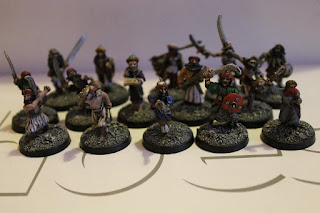 Not only for Conan, they'll also make a nice Song of Blades & Heroes warband, or stand-in for Dungeons and Dragons. We have the Magister, flanked by a Hero and Champion looking pair: 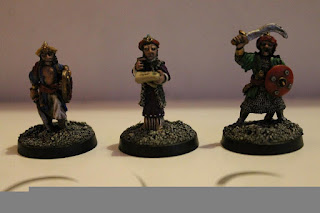 (Crikey, photos are even worse than usual today, that's what I get for not finishing in time to use natural light). When I first pulled the central chap out of his ebay package, I thought about using him as some sort of town official, but it didn't take long before he'd been recast in my mind as some sort of evil magister. I mean, look how fancy his coat is! 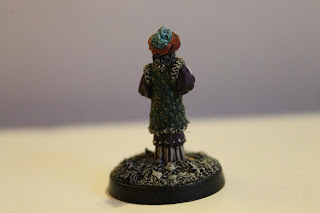 Supporting them (and by supporting, I mean dying in droves under the onslaught of even the lowliest Hero type) we have a couple of henchmen: 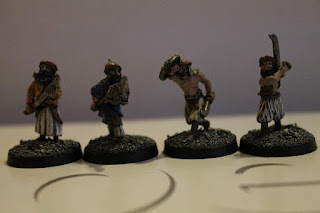 I don't know why that guy even bothers with that shield, he's not even wearing a shirt!

Unsure of whether they're goodies or baddies, we have a pair of warrior princess types: 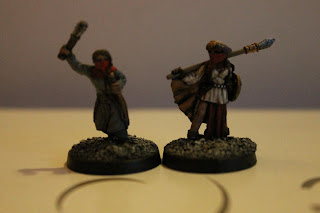 (pretend these photos are brighter) 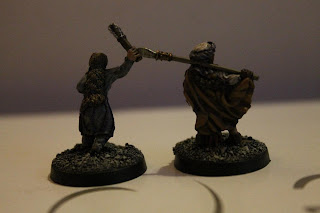 When they're not part of a sinister cult, they can stand in for various character classes too.

Last but not least, we have the minis that shape the theme of the warband, dependant on their inclusion: 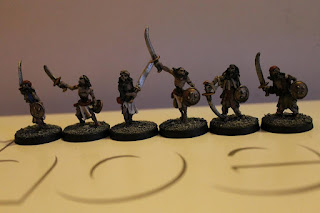 Zombies! With these, we have the entourage of an evil necromancer, without them, they're the bodyguards of an accountant...

Every miniature features a red sash or scarf, to tie them all together, but also to link them to the Snakeman I painted a while back, huzzah!

Actually finishing some miniatures brings the tally to:


27 vs 67 = -40 As soon as I can find a shade of pink I like for finishing off needlers, I'll have another dozen finished miniatures, but that still means I'll need another 28 to get back to zero - and Salute's in three weeks...
Posted by myincubliss at 22:57 1 comment:

With a new hinge system that holds the lid open! Although they're not going on sale for another fortnight, so we'll see then if that prevents the usual spillage issues... Also, the lids on the shades and glazes can be a bit of a bugger to open, but that could just be me lacking manual dexterity...

Other points of interest: the new 'base' paints are thinner than the old foundation paints, which should mean they last a bit longer before turning into a gloopy unuseable mess, and the new 'drybrush' paints aren't really paint at all, more like a mousse, which will take some getting used to... 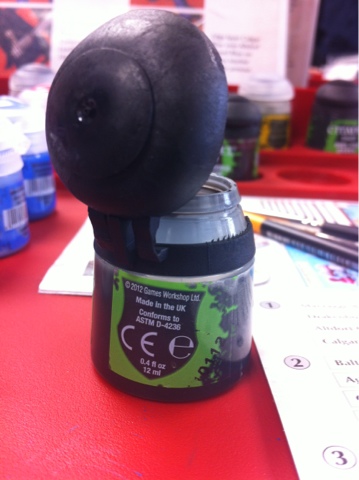 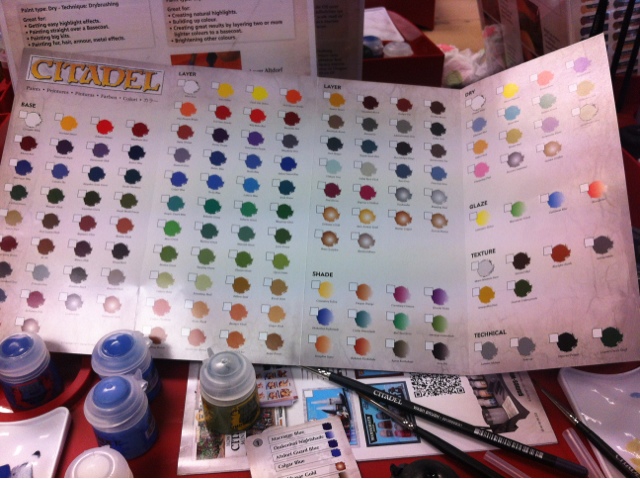 Posted by myincubliss at 12:52 No comments:

The single greatest comic panel ever made...

...is this, from issue 16 of Warlord of Mars, one of the many John Carter comics: 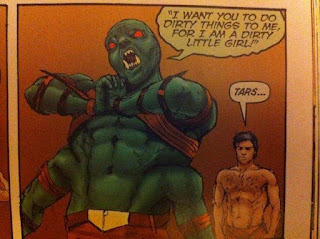 Even in context, it's hilarious (although for different reasons).
So, I've still not finished any miniatures, because I realised I had this to deal with: 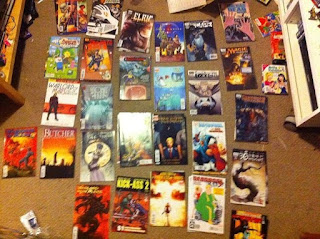 I hadn't got round to reading any comics yet this year (most of these piles have 3-5 comics in). And yes, I do get six seperate Barsoom series. Sue me, I likes me some Barsoom.

Despite not having any proper progress to show, the postman brought me some more goodies: 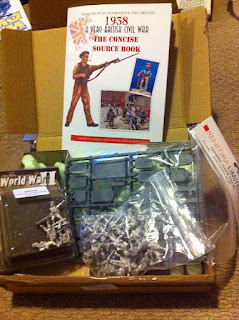 Crusader Early war brits, Artizan British command and the VBCW sourcebook is the start of my foray into alternate local history, as well as some Renedra grave stones, because graves can be used for pretty much any setting... 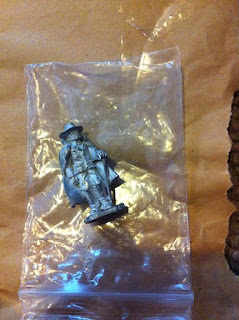 And also this cheeky Artizan chappy, another goody bought from Mr Marx. He'll make a rather spiffing renegade Threashold Agent for Strange Aeons (when I eventually get round to painting him, that is...)
Which brings the tally to:

Finishing the twenty-seven almost painted miniatures on the painting table at the minute would only claw me half the way back to zero...
Posted by myincubliss at 00:15 2 comments:

Alas, there is no cork, and the samples that I had from various online retailers weren't what I was after (turns out it's hard to find unlaminated natural cork)... I even nipped to our local art shop, where I'd previously gotten sheet cork to make a comic shop in the style of Matakishi, but they only had rolls of super-thin cork...

Onto happier times though, after seeing ilikepaintinglead's blog and one of the regulars at work bringing some in, I nipped into poundland and picked up some of these: 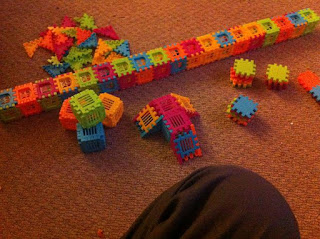 Yes, I got distracted and made a spaceship while I was working out how many tiles were useable for making terrain. Annoyingly, out of the two bags I bought, there was only enough plain brick tiles to make four bits of wall (assuming I make them the same as in ilikepaintinglead's blog, as mentioned earlier), but enough bits with 'OK' in the middle of them to make a tower of babel-esque proportions... I may have to nip and get another bag or two before I start in with the cutting and glueing...

Also, the tally has changed (which is good, as I know I've got a parcel in the post):

Nothing much and the quest for cork... 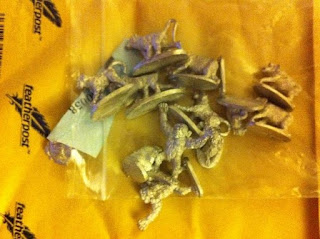 Alas, I've still not finished painting anything. I was hoping to combine an up and a down to the tally with this post, but no dice. These 14 apes for Rise of the Planet of the Apes sink the tally even further to:

In other news, I've been on a quest for cork recently after mattblackgod posted up pics of some rocky mars terrain over on the Lead Adventure Forum the other day:

Unfortunately, there seems to be a cork shortage on. There's a shop in town that has cork pan coasters at 2 for a fiver, which is a little more than I'm willing to pay for around a square foot of cork. Ikea has the same thing at 3 for £2, but they aren't something they'll deliver, and the nearest Ikea is a little out of the way to nip in for some. I even hit B&Q today, only to be told that they 'don't do cork tiles any more', which is a bit of a bugger...

Now comes the random ramble: I can't stop reading VBCW blogs! The only thing that's stopped me from buying a load more miniatures is not really knowing where to start... That, and I've not got access to the magazines that had the LOTOW rules adaptation in (as they're currently in a box in storage) and I can't remember which issue (or which magazine, truth be told) they're in to try and find a pdf... I was originally thinking about dipping my toe into the water by converting and painting a miniature to represent a local figure of the time (like the Lady Mayoress), but at the same time Crusader Miniatures are doing WWII miniatures at a bundle price...
Posted by myincubliss at 19:16 5 comments: