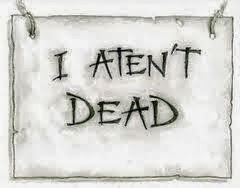 But I've had a busy four weeks - I got married at the end of August:

and then honeymooned in Toronto (beautiful) and New York (awesome), and even had two thirds of Haim come up to me to compliment me on my choice of shirt, which was nice:

We conquered various monuments and areas of natural beauty, ate a number of incredibly fine meals that would otherwise feed a small family, and I drank a rainbow assortment of flavours of Mountain Dew and delicious (and cheap! a pint and a half can is cheaper than a small bottle of coke!) hipster beer: 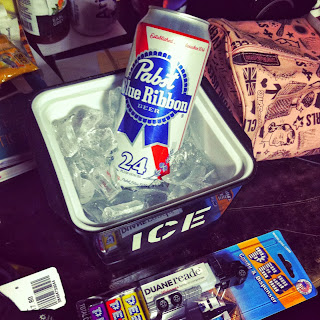 Returning to the UK has been busy too, both for having interviewed for (and gotten) a new job that I start this Sunday (hooray) and a death in the family (boo), which hasn't left me a lot of time for painting little men, and I'm a couple of months behind on reading everyone's blogs...

That doesn't mean I'm quitting the game, by any means, but there's still a ways to go before I'm back to finishing things with any sort of regularity to fuel blog posts... Although hopefully we should be starting a Dungeons & Dragons campaign soon. It's been on the cards for a while, as Uncle Johnny's wife (oddly) got the hankering after watching a documentary that portrayed Dungeon Masters as tragic figures, prone to suicidal thoughts and failed relationships, and asked me to DM as I'm A) the geekiest person they know, presumably, and B) I have the books (and hopefully C) unlikely to be dragged into a deep depression by DMing like every single DM in the documentary). 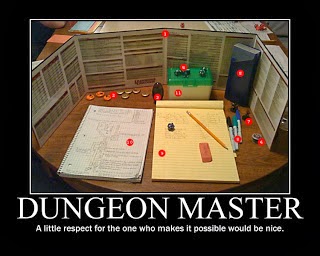 I'd been wanting to play for a while, but I'll settle for playing as the ego-maniacal one behind the screen: 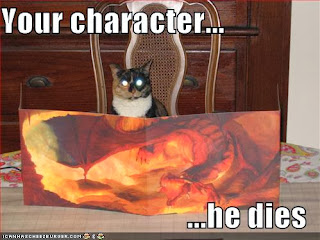 The aforementioned busy times put it on hold for a while, but we should be ready to play imminently (we'd potentially be able to start sooner if I hadn't been raised the sort to scoff at the idea of playing with unpainted miniatures...)

As an aside, despite my wife's lack of geekiness, whenever we ended up going in a games shop on the honeymoon we ended up spending more on her than me - at Hairy Tarantula in Toronto, I picked up a couple of small Munchkin expansions and she decided that she needed more dice if she was going to play D&D (bearing in mind I bought her a set at Salute), as I manfully resisted the urge to pick up some Magic cards: 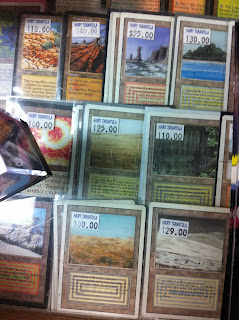 And when we went to the Compleat Strategist in New York, I frugally only bought myself a small sample of Reaper Bones (to use as the potential basis of a Song of Ice and Fire knightly conversion), but my wife saw a pack of barstaff Mouslings and demanded that I buy them and write them into the campaign somehow (god bless the old fantasy handwave of 'a wizard did it'): 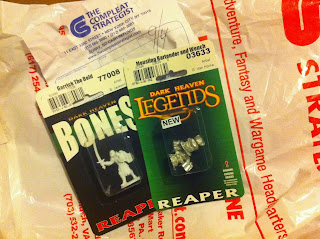 Alas, this takes the tally to:

The two and a half month break without completing any painting or posting makes it seem (as it does pretty much every year at around this time) unlikely that I'll be back in the black before the count resets with the New Year... But hey, I'd settle for getting back into the swing of painting...
Posted by myincubliss at 21:49