Well, browsing through my drawers of miniatures I discovered that where I previously thought I had finished a couple of squads for a Witch hunters 40k army, I'd only actually in fact half-finished them. Having many more pressing and urgent projects requiring my attention, I of course immediately promoted one of these squads up the painting queue: 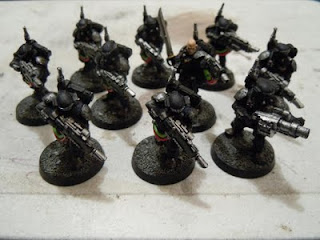 I think I originally started painting these four or five years ago, and truth be told probably should have stripped them and started from scratch (that way, I could have done something about that mould line across the Sergeant's scalp). A quick spot of paint here and there, a couple of layers on the bases, and boom, squad finished. I can but assume that if I ever manage to finish enough miniatures for this army to be useable in a game, a new version of the codex will finally come out, and nerf it into line with Inquisitors as they appear in the Grey Knights codex (Eversor assassins don't explode?! Arco-Flagellants don't die from running too hard?! Vindicare assassins bring enough ammunition to a firefight?! Oh, wait, I don't mind that last one too much...)

I'm thinking about picking up some of that Army Painter dip that you hear so much about, which would let me shade a bunch of stuff for the Three Kingdoms project in one fell swoop, kicking the numbers back into respectability; Given that that is a good idea means that it's exceedingly unlikely to happen, far more likely is that I'll start a Game of Thrones miniatures project (guess what I'm currently reading - those chaps on the wall appear in my mind's eye as Rohan plastic warriors) or start the Nikolai Dante Tsar Wars project my mind keeps drifting to - it's far too easy to start skirmish sized projects, you think you'll only need to paint a handful of miniatures and you'll be happily gaming away, but in reality you get distracted by a new shiny project somewhere between buying the miniatures and actually painting them...
Posted by myincubliss at 21:46 No comments: