It’s May the Fourth, and with that comes my annual Star Wars themed post! 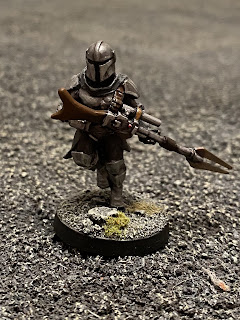 This year’s offering is a handsome Bounty Hunter known mostly as Mando, a Diehard Miniatures sculpt that my wife bought me for Christmas, as we’d thoroughly enjoyed the Disney+ show. 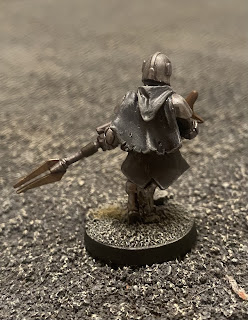 The details are clearly only ‘inspired by’ the star of the Disney series (being different enough to avoid any Imperial  legal entanglements), but he’s still a lovely miniature that I’m glad to now have painted! He’s a little more on the heroic end of scale though, especially when you compare him to another Mandalorian miniature that I previously painted: 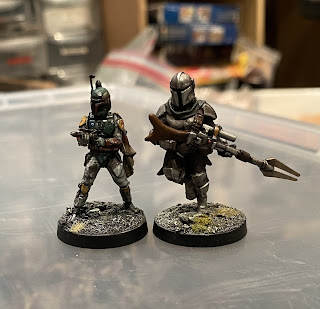 All he needs now is a little space goblins buddy!
Tally:
19 vs 18 = +1
Although typing that reminds me that I got a freebie Daemonette from GW with two right legs: 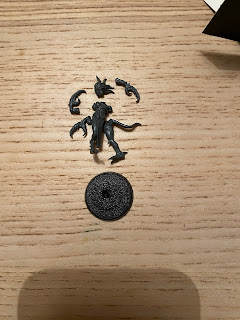 which drops the Tally back down to
19 vs 19 = +0
I really must nip into town and get a left leg for her... although after the whole ‘Cursed City is now only a sold out limited run’ incident happening so soon after my disappointment in not being able to get hold of a copy of Blackstone Fortress Escalation after having my order cancelled I may be done with GW for the foreseeable...
What else has been happening in the more than a month since my last post? Not a great deal of painting, truth be told. I’ve almost completed the first Kingdom Hearts game, which has been taking up the evening time that would usually go to painting, although I have had a couple of cracks at finishing the scatter and treasure tokens on my painting tile finished but it still feels a long way from being done. We also finally got round to watching Pacific Rim, ten minutes into which my wife turned to me and said ‘I didn’t think it was going to be this silly’ so evidently she had high expectations of the robot vs kaiju slugfest...
Next, who knows. I want to play a solo game, so should probably crack on with that, but on the other hand my having played D&D in a year means I’ve got a hankering for painting something from the Monster Manual...