The Mountain that Rides...

My journey through my painting queue continues, venturing to a miniature that has been about 80% finished for several years, Ser Gregor Clegane: 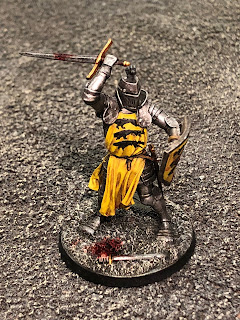 I'd had the metals and the yellows done for a time, but the dogs detail was putting me off. I bit the bullet and grabbed a tiny brush to bring him to the finish line! The sculpted detail is lovely, but a little shallow, so I had to improvise a bit. Squint a bit and it looks great! 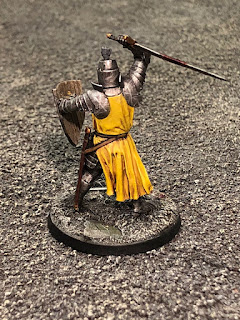 I also went over the armour with a ton of dings and scratches to make it look like he lives for nothing but combat. Rules wise, I think I'll use adapted troll stats - he should be able to tear through a horde of regular troops! 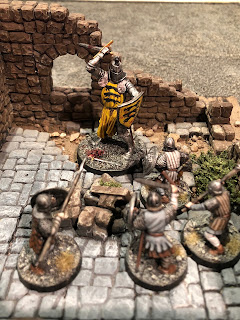 The Dark Sword A Song of Ice and Fire figures are a larger scale than everything else I'm using, but The Mountain is meant to tower over his foes, so I think it works in this case... Which is a bit of a shame, as there are some lovely figures in that range, but they'd just look out of place with my Perry troops!

I have a scenario percolating in my head involving the Mountain and some of his brigands trying to burn down a house (so I should probably get around to building and painting the Perry House I have tucked away somewhere) in the period where they rampaged around Westeros during the War of Five Kings, so who knows, maybe I'll make some more Stark troops next year..

So, fifteen more minis before the end of the year to hit my Challenge target, what next? I've got a few bits currently on my painting tile, but then again there's an entire Blood Bowl team in the painting queue, choices choices...
Posted by myincubliss at 18:00 1 comment:

Freak on a Lich

Another random mini plucked from the painting queue: 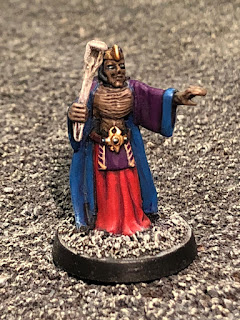 He's a Mage Knight figure originally I think, so the detail is a little funky, but I quite like his imperious pose. He's been in the painting queue for so long that that's actually a GW base he's on, so he was prepared before I started buying bases specially for miniatures rather than just scavenging them from Warhammer kits. 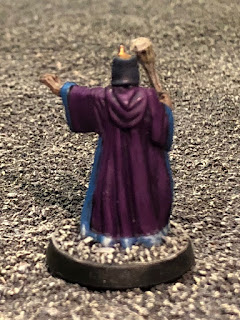 I originally had ideas of trying to speckle a starry design on his robe, but the pressing need to finish an average of about two miniatures a week to hit my total of 52 for the year put paid to that! I added a little extra detail to his tabard though, to jazz it up a little. Also, carefully applied some guyliner.

He'll probably be a Lich (a word that should rhyme which 'itch', but I tend to pronounce 'leash' when I'm tired, much to the chagrin of my D&D group) in the generic fantasy project, or can get added to the box of miniatures that can be used to menace Conan. Which reminds me, I should get around to painting some more companions for Conan!

Work on my Zomtober remnants continues, as earlier this week I finished Carl: 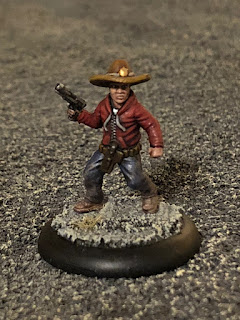 He was actually finished Tuesday night, but life happened a bunch (Rolo Tomassi at Scala last night was fun) and so I'm only getting round to taking pictures and posting today. We were going to pick up a mini lightbox from Flying Tiger this afternoon after seeing one on a Gunpla Facebook group, but our local one didn't have it in stock, so these pictures were taken with my photo board balanced on an airer in the bathroom instead... 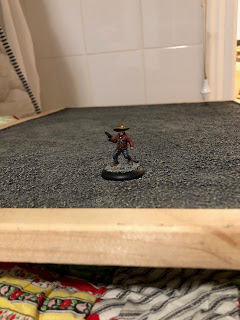 I'm fairly fond of Carl, unlike the majority of the internet it seems. I didn't follow the TV series for very long, which might have something to do with it... 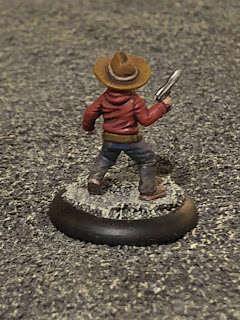 This sculpt is absolutely lovely. Much kudos to Mantic for the quality! I painted his lower half as being incredibly grubby, but I liked how his hoody had come out so much that I couldn't bring myself to cover it up with a layer of dust!

What next? I'm down to two miniatures remaining from the batch that I had prepped for Zomtober, as well as a few half finished odds and ends that I've pulled out of the painting queue in an attempt to hit the 'have finished 52 miniatures by the end of the year' challenge I set myself way back when, but at the same time gee that Blackstone Fortress box game that GW are currently previewing sure does look apealling...

"Comin' again to save the motherfuckin' day, yeah…" 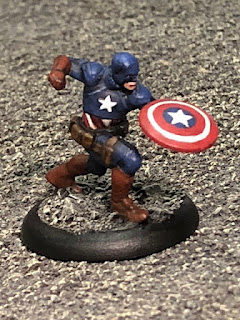 A bit of a random one, this. It's something plucked half finished out of the painting queue that I worked on here and there whilst waiting for washes to dry on other things, mostly. He's a repainted Heroclix figure, so the facial detail is almost non-existant, but I'm passably satisfied with how the shield turned out, so there's that. After much deliberation, I went for a reddish leather effect on his gloves and boots, as a sort of halfway-house compromise between the movie style and the classic comic costume.

Finishing him means I now have a bevy of finished Avengers - but no one for them to punch... I do have a classic style Hawkeye eyeing me from my painting desk awaiting undercoat though, so who knows, you might see some more Avengin' types in the near future...

Last night I managed to finish one of the figures that I'd originally intended to include as part of my submission for this year's Zomtober, but didn't quite get finished in time, The Governor from Mantic's 'Prelude to Woodbury' set: 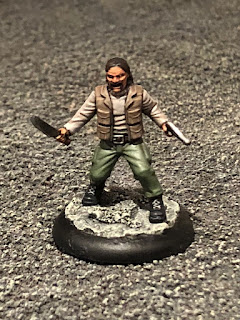 Another rather lovely sculpt from Mantic! Detailed and characterful enough to be fun to paint and nice looking even with a fairly simple paintjob, which is always a winner in my book! 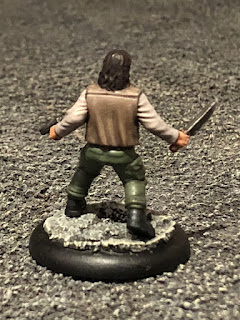 Now, my experience with the Walking Dead only extends as far as the comics (well, and the first couple of series of the TV show before we gave up on that), so I don't really know much about the pre-tyrant era Brian from the novels that this miniature is modelled after; I'm more used to this guy: 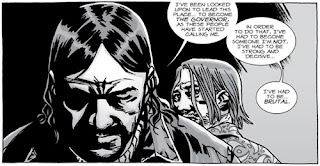 Maybe if I finish off all of the models in the starter set, I'll treat myself to an expansion or two and see if I can't pick up a model of the Governor once he's missing some bits...