A winner is me!

My prize from Lord Siwoc's recent competition, or should that be Lord S(iw)ock? 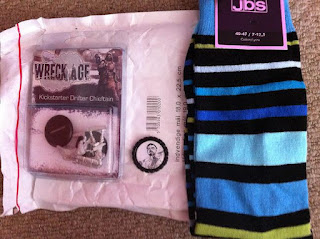 Wreck-age limited edition Kickstarter miniatures (including a baconbomb, a pig strapped with explosives!), a Lord Siwoc zombie survivor magnet (that hasn't gone up on the fridge yet, as I'm moving house in the next fortnight, but rest assured, it will be used in anger) and a pair of stripy socks, which cracked me up when I opened the envelope. Anyone reading this that hasn't yet visited Lord Siwoc's blog is advised to go and have a nose, I mean, he actually plays games with his zombies ... (one day gadget, when I finish (re)writing my ruleset...)
Posted by myincubliss at 18:59 3 comments:

Boils and pustules and marks oh my...

Just a small amount of work done on the Marauders, as I still have as of yet to acquire any Warrior heads: 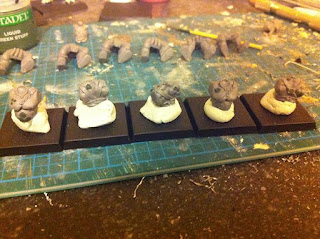 Some quick greenstuff work to add some of Nurgle's blessing to the Marauder bodies. Liquid greenstuff makes adding boils a pretty speedy job, and a minute or two with the end of a paperclip makes a couple of burst ones. The body on the far left is the only duplicate in the group (as I'm using a zombie body, in the background of the blurry pic above, on the sixth marauder), so I thought I'd pretty up his ostentatious belt buckle with a Mark of Nurgle. Off came the existing detail with a knife and files, and again Liguid greenstuff was used to paint on the three circles that make up the symbol. I ragged up the edges with a knife, and I'll come back tomorrow to do some more tidy up on anything that needs it.

In other news, why is it that sometimes the Nurgle symbol is one circle above two, and others it's flipped upside down? Truth be told, I looked it up in The Lost and the Damned, and went with that one...
Posted by myincubliss at 23:35 1 comment:

Walking the Path to Glory...

So, I've had a hankering for some Warhammer recently... 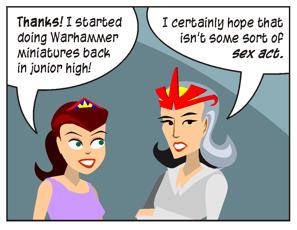 So, looking into low model count games (that I'd be more likely to be able to finish miniatures for than battle scale games) I came across a PDF of the old rules for Games Workshop's Path to Glory. Admittedly, I could have found something that would use miniatures that I'd already painted rather than needing to paint some new stuff, but that would be too easy. And sensible. And I'd been reading PDFs of the old Realm of Chaos books, so I was in the mood for rolling on some tables... (yes, I could have just used the Realm of Chaos rules, but I'm too young for Oldhammer).

Champion (with +1 ws) - need to get a miniature for this - ideally I'd like to get the 1989 Champion with halberd, purely because I like the fact that he has a little Nurgling buddy sat on his shoulder...

Chaos Spawn - huzzah for the conversion opportunities! I have the Spawn sprue somewhere, but I'm more a fan of the oldschool spawn conversions (like the one in an old White Dwarf that's half tiger, half barbarian, and has a snake for an arm). So yeah, we're going for an 80's style with these (or at least my nostalgic view of 80's Chaos as I saw it in the 90's...)

3 Beastmen - gives me a chance to use the Pestigor miniatures in my bits box! I've also got a random 80's Marauder Beastman that I picked up at Salute that I'd like to use at some point too...

Chaos Troll - again cause for celebration, as I have one in my bits box that I picked up at Games Day a couple of years ago! Plus, it being Chaos gives me a few opportunities for conversions...

6 Marauders - I've got some marauder sprues knocking around from when I decided to convert a Blood Pact themed Imperial Guard army (I did a dozen or so and stalled. One day...) I think I'll be going with flails on these bad boys, as although hand weapon and shield is more survivable (and looks pretty cool) if they can't crack chaos armour they'll end up just as dead...

which was my 35 Favour Points spent.

Enthused about my selections, I put out the call to see if anyone else fancied playing, and have at present three confirmations - Tavo (artist and raconteur extraordinaire, who rolled a Chaos Warrior heavy Undivided warband with a Daemon-weapon wielding Champion); Rob (who rolled a Warhound and Minotaur warband, with a Champion with the Mark of Tzeentch); and Uncle Johnny, who has been thus far tight-lipped about what he's rolled... (although he did mention finding most of a Daemon Prince and most of Orion...) Seeing the rewards people had rolled for their Champions I was suddenly less impressed with my +1 WS, and not looking forward to facing down blocks of Chaos Warriors or getting blasted from a distance with magic!

At this point, Uncle Johnny text me to check which version of the rules we were using... Cue some hurried downloading as I hadn't realised there were more than one! Looking at the updated rules, I decided we'd stick to the original sets of followers tables, as I prefer the mashup nature of these warbands (with Beastmen and monsters and whatnot), rather than those from the later rules (which exclusively feature choices from the Warriors of Chaos Army Book). I did add the Forsaken as a choice though, as I think they could be quite fun to convert... We'll also use the equipment selection rules, Injury tables, and scenarios from the later rules, because (to a point) more tables means more fun!

So, I dug out some miniatures from my bits box: 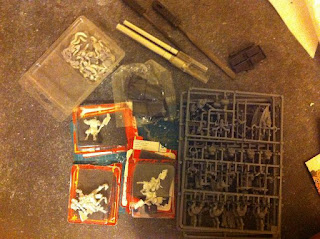 (The blister at the top is full of random mutation-y bits. And yes, I found another blisters worth of tentacles, claws and whatnot the next time I had a dig).

Once I'd cleaned up my Pestigors and stuck them to their bases, I started thinking about my Troll. After rummaging through my bits, I decided that I wanted to give him a hand swap for a claw and a tail. Originally, I wanted to give him a tail with a snapping mouth, but the piece I had was so short that you wouldn't be able to see it if you looked at the miniature straight on! So instead he got a longer tail with a spiky club for a tip: 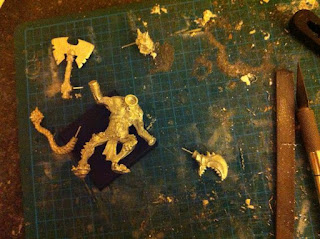 Pinning is key if you don't want things to fall apart further down the line!

Once it was all put together though, he looks like this: 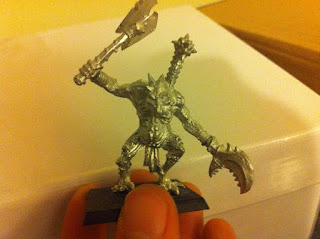 See what I mean about the tail? It took some careful bending to get it positioned in a way that looked natural, whilst still leaving me enough space to get a brush around! Talking about his tail: 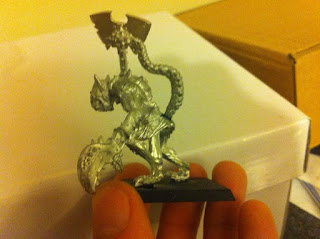 A little bit of Liquid Green Stuff was used to blend the added piece into the rest of the model.

With the first bit of fun done, it was time to move onto cleaning up plastic Marauders: 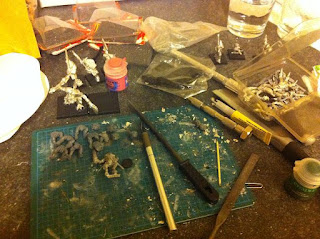 Annoyingly, I saw a picture of some Marauders converted to have Warrior helmets, and they looked so awesome I knew I'd never be able to settle for the standard heads... They just look cool with the horns shaved off, and I reckon sticking  plaguebearer style horn or one or two might be quite nice too... So onto the backburner they go until I can source some helmets.

And yes, there are a couple of old Sorcerors up in the corner, I thought I'd start cleaning them up on the offchance that I happen to roll one up after a couple of games. It was slightly surreal cleaning the mould lines off of a miniature that's older than I am... well, until I started thinking about the lead content. Then it was less surreal, more concentration.

So, here's to hoping the birthday fairy brings me a Nurgle Champion miniature in a fortnight... Also, we're moving again, so it might be a little while until I get to slap some paint on these...
Posted by myincubliss at 23:57 2 comments: 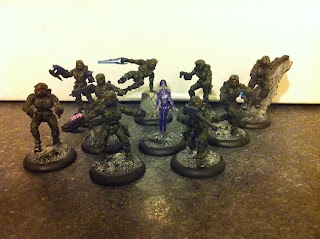 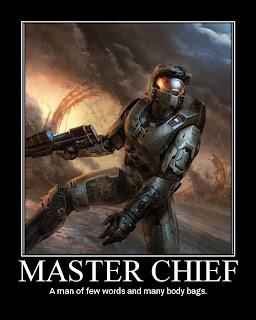 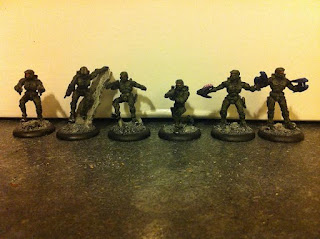 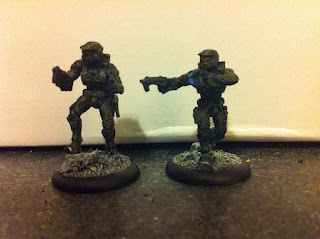 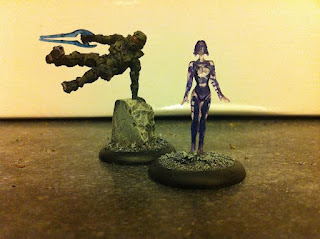 So, whilst procrastinating from painting the multiple iterations of Master Chief that are currently in the painting queue (the armour came out a lot darker than I was expecting after the wash, and I'm umming and ahhing over starting over or just pressing on regardless) I decided to make a ghetto Wet Palette out of everyday household items, as I begrudge paying twenty quid for something I can make out of tat I already own.

There are a number of good tutorials around for this, the only one that I can remember offhand being this video, but essentially it boils down to a couple of basic ingredients: 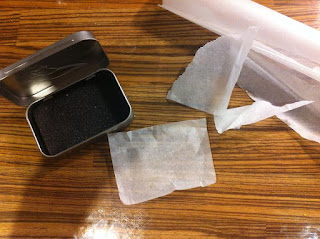 A receptacle (in this case a Limited Edition Femme Militant tin, I assume the John Blanche autograph on the back is printed on...), some water (not pictured), something to soak with said water, and baking parchment. That's it. Soak the sponge in water, bung in a bit of cut-to-size baking parchment, and voila: 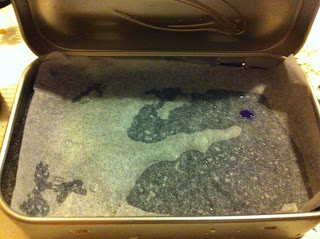 Instant Wet Palette. Although I admit it may currently be a little too wet. Currently using it to paint Cortana for Halo, which is less fun than expected as it's rather hard seeing where you're painting on a see-through-miniature...
Posted by myincubliss at 22:42 No comments: