As you may have seen in my previous post,  the shields I'd ordered for my Stark troops turned up, so it's moulding time again: 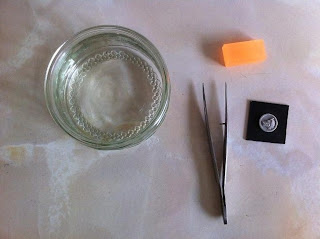 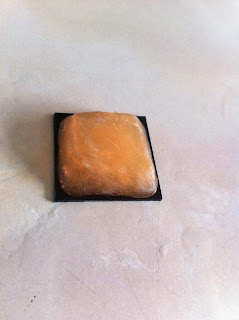 Which trims down to a much more appealing looking stamp: 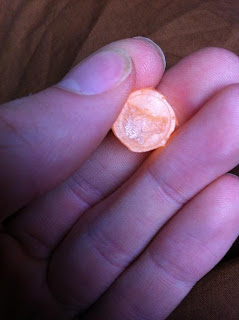 Unlike previous attempts, with this mould I was able to transfer the greenstuff wolf head directly onto the recipient shield: 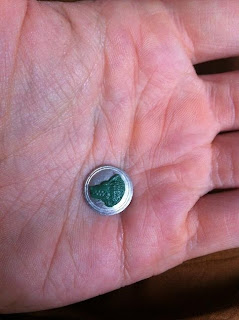 I think my previous attempts failed as I was trying to transfer detail that was too thin, but this wolf head is oldschool gw - nice and thick! Plonk the filled mould straight onto the shield, pop out the greenstuff, and then a quick clean up round the edges with a sharp knife and pow, the shield is ready to go. Multiple shields are ready to go, in fact: 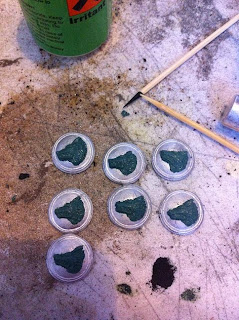 Well, that was last night. Today was an unusually sunny day, and as my mother told me so often during my youth, you should go outside and get some fresh air - so I did: 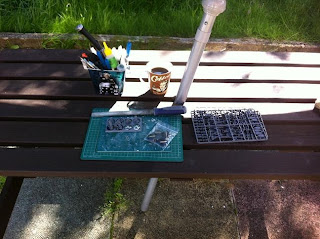 Alas, some of the neighbours were enjoying the pleasant weather more traditionally, with thumping drum n bass, but I had Les Trucs to try and cancel out the noise... Much (much) filing of integral bases later (oh how I hate integral bases), a retreat indoors for dinner and some cutting and glueing later, and we have the beginnings of my House Stark warband: 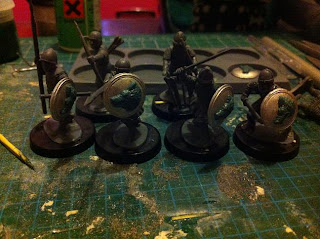 Fireforge Men-at-Arms bodies with converted Gripping Beast Viking arms (my favourite being on the leftmost spearman, carefully removed from the body it was originally attached to to get the pose I wanted) and a mix of Fireforge and GB heads. The bowmen were already done (Fireforge bodies with Perry arms and accesories), I only actually got four miniatures built. Not a load, but it's a start - I'll probably add another chap with a sword and one with a spear, as well as a couple of guys with two-handed weapons, and maybe a knight or two (even though in the North they don't really have knights, but you know what I mean). Then I should probably start working out some stats and points values for these guys, before adding an Eddard Stark miniature so I can game the Ned/Jaime showdown: 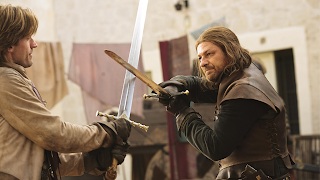 I know, it was added for the TV series, but it's cool and easily gameable at skirmish level, what's not to love? As previously alluded to, I already have a miniature lined up for a Jaime conversion, and it turns out I forgot to add to the tally the miniature that arrived to be the basis for my Ned: 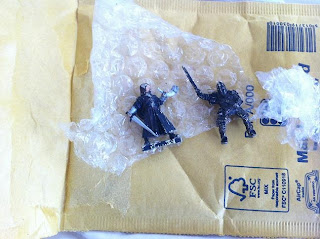 Oh Sean Bean, how handy it is that there's a readily available tiny metal version of your face. Alas, [spoilers] this conversion won't get much use [/spoilers], but still. Also pictured is a Rohan chap that was cheap from the same seller, that may or may not end up as the basis of a Robb conversion.

Actually remembering to include these two brings the tally to: