Strap in, this could be a long one...

Foolishly, I went out to celebrate a friend's birthday the night before Salute. There would have been a post bemoaning my own foolishness (complete with pictoral evidence of the number of empty glasses), but it didn't post (presumably as the pub we were in was a lead-lined box with no signal).
Five hours sleep later, I was up and raring to trek to Salute. The journey was relatively straightforward this year, as no-one had decided to wander onto the line like they did last year, and we managed to get to the Excel centre just after doors had opened. However, when we got to where we needed to be, we saw that the queue went a fair ways back (literally as far as the eye could see...). Trekking to the back of the queue, we found a man with a sign saying 'cash queue'. Turns out as we had tickets we didn't have to join that queue at all, and (feeling somewhat foolish) began the long walk back to the entrance...

As ever, Salute featured many, many shiny things, many of which I'll realise I somehow missed when they start appearing on other peoples' blogs. Firstly though, I failed to meet up with any other bloggers - I saw The Angry Lurker and Ray in the cash queue, but must have got the time wrong for the bloggers meetup as there was no-one I recognised by the entrance at half 1 (re-reading Ray's blog post, it turns out I should have been by the seating area - that's what I get for not reading the map and assuming it was oriented with the entrance at the side! - it also turns out that whilst I thought I was following Ray's blog, blogger disagreed with me, but that's now fixed). I saw the back of Tomsche's head (well, his Pikachu hat) at the start of the day but didn't see him again to say hey; I walked past 6milphil and didn't twig who it was until afterwards... Basically, I suck at networking.

On to the pictures (alas, I only took a couple, as I was busy walking round gawping at things and scrabbling through buckets): 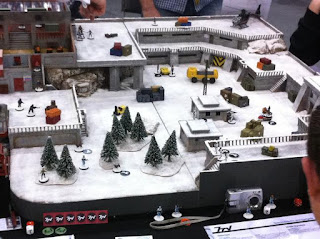 Epic 7TV table from those wonderful chaps (and chapesses) at Crooked Dice. Shiny. 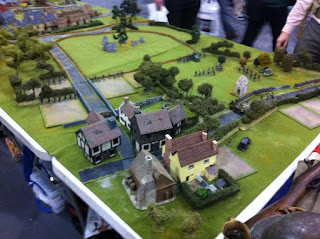 VBCW table (presumably hosted by GWP?) that I had to walk away from as it was making me want to buy things from Dixon and Musketeer... 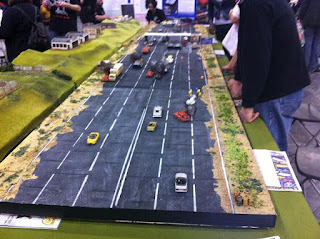 Captain Scarlet will always be aces in my books... 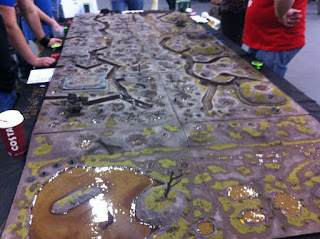 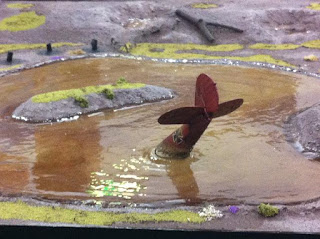 Hee hee. Onto the main body of the post though: the loot! 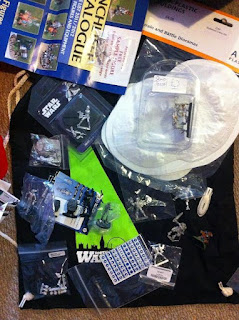 Not as bad as I'd imagined (or hoped), which brings the tally to:

There were a few other things I either couldn't get or almost got - I fancied some more scenery, but other than the Amera craters there was nothing that really grabbed my fancy; I was tempted by some VBCW, but since Gripping Beast didn't seem to have the schoolboys that they do I was able to resist the allure of Musketeer and Dixon; I almost picked up some Malifaux from Simpe Miniature Games as they had a 'buy two starters and get the rulebook free!' deal on, until I relised that I'd be spending fifty quid to save a tenner on sixty quids worth of stuff that I didn't really fancy much...

After trekking back to Canterbury, Uncle Johnny and I got to chatting about the new GW paints, which led to popping into the local stoe, which led to me buying some paints. And a book. It's a nice looking book though (the Blood in the Borderlands one) so that make it okay I guess. I even got a replacement backpack for the Witch Hunter I got for Easter after the staffer heard me bemoaning the quality of Finecast to John. There goes my planned 'Failcast' post then...