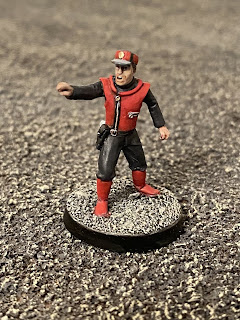 So during the previous lockdown (my preferred one, if I’m being honest, as I got to stay at home, as opposed to the current lockdown, where I’m spending more time than ever at work) I found myself rewatching the original series of Captain Scarlet whilst doing the washing up, one of my favourite series from childhood. Around the same time, I saw that Crooked Dice had this lovely figure in the Bargains section of their online store, and I seem to recall that whilst idly browsing when I should have been sleeping he fell into my cart... 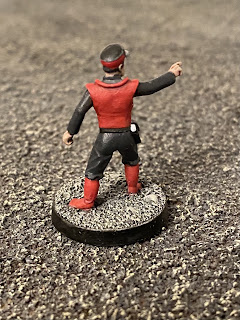 So he got cleaned up, undercoated, had a base coat of flesh applied and then spent the rest of the time sat on my painting tile watching me do other things.
We’ve hit that stretch of the year now though where I realise that I need to get a wiggle on if I’m going to hit my target of 52 finished miniatures for the year, and so I focused on getting him finished rather than flirting from figure as they take my fancy as is my usual way of working!
No plans for any project in particular for this figure, although I know I could always expand out with some more Spectrum agents from Crooked Dice of the fancy takes me...
Finishing him brings the Tally to:
44 vs 115 = -71
So what’s next? The Tally sibling further into the negative, truth be told, as there may well already be more miniatures on order at this point...
Posted by myincubliss at 22:21 1 comment:

In another out of character timed post this year, I decided to paint up a little something to celebrate N7 Day this year: 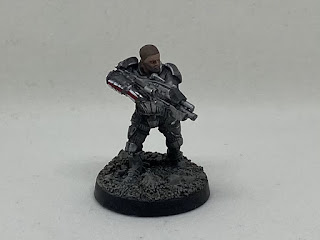 A light armour spaceman from Brother Vinni that I picked up at Salute a few years back that coincidentally makes an ideal stand-in for everyone’s favourite Shepherd: 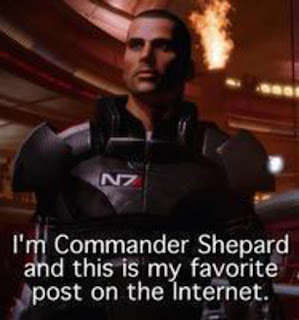 He’s a lovely little sculpt, as is everything I’ve had from Brother Vinni, and looks quite nice in hand, even if my photography doesn’t do him much justice... 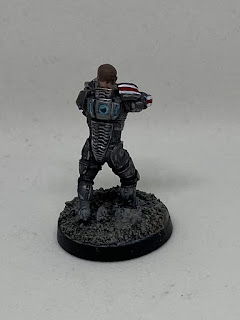 Here he is literally in hand, to get a better idea of the colours: 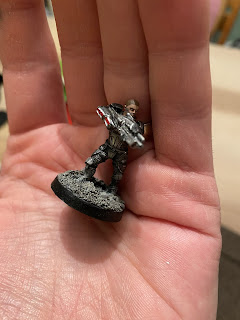 After taking these pictures, I went back and gave his base an additional bone drybrush, as it was looking a little bland (as the first time I painted it, I went a bit too heavy and it looked too monochrome, so I washed it back down and started again, but was perhaps too timid the second time!) 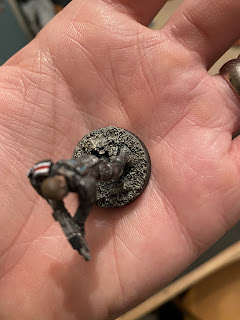 So, Shepherd is the first miniature completed for the Mass Effect project that I’ve had on the back burner for at least five years (as I think I started gathering bits for it when my wife was pregnant with our first child), and will probably never actually get used, as he’s something of a one man army, which makes it a little hard to use in a friendly game with an opponent... maybe if we start yet another Rangers of Shadow Deep project... Either way, he was a fun little mini to paint, regardless of whether he ever gets to leave the figure case again!
Painting him brings the Tally to:
43 vs 111 = -68
Nine more to hit that one a week average challenge for the year!
...or at least it would have been, if not for the timely arrival of this lovely little box of joy from Russia the day before this post was scheduled to go live: 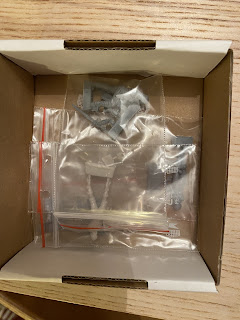 Four miniatures that entirely coincidentally look like characters from the Witcher series, what luck!
Which leaves the Tally at
43 vs 115 = -72
Posted by myincubliss at 08:30 2 comments: