Despite the expectation stated in my previous post that I wouldn't get a chance to finish anything else this Zomtober, between my wife being at work and my daughter having the mother of all naps I managed to paint these three from start to finish yesterday: 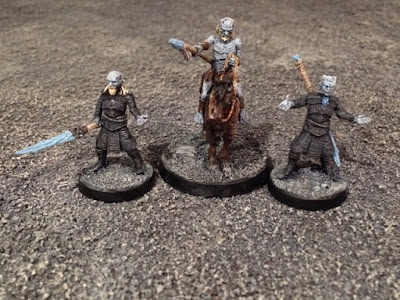 A set of three 'Draugr' from Elladan miniatures that are coincidentally the spitting image of the White Walkers from the Game of Thrones television series. 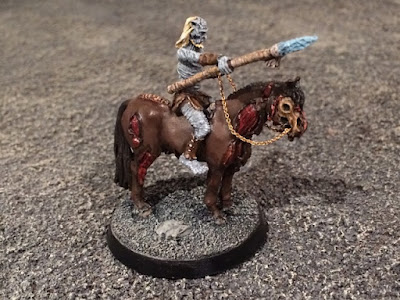 This is potentially the first horse I have ever painted, and it was actually pretty fun (although not every future horse that I paint will have hanging ribbons of flesh and exposed bone to pick out, so I don't know if that will affect my enjoyment). 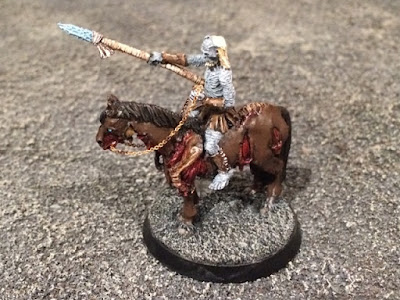 The chain is a fun touch too, although in hindsight I wish that I'd soaked it in a dirty wash before attaching it so that it wasn't so shiny - I only thought this after having already glued one end of it inplace sadly, and it was a bit fiddly trying to apply Vallejo Smoke to the hanging chain in situ). Maybe I'll go back an try and give it a bit of a drybrush with a dark brown... 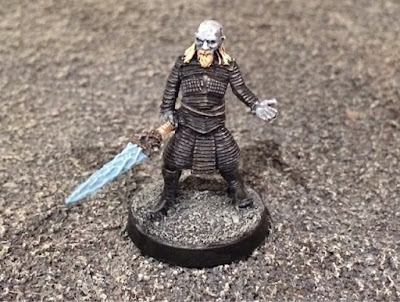 The sculpts were pretty straightforward to paint, hence me being able to finish them in a single day - their armour, which is the majority of the surface area of two of the three, was simply drybrushed with grey, then again with a medium silver, before being washed with black, to give an unnatural, unusual finish that I felt suited the alien nature of the Others. I think the Others are to Game of Thrones what Elves are to other fantasy settings - humanoid, but totally alien in their design and desires; inscrutable in their objectives (which will turn out to be nothing like the original assumption of them,meeting based on human logic and ideas). 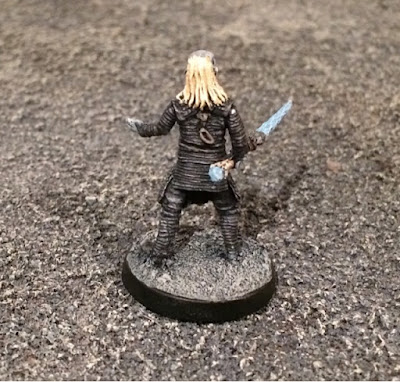 (Don't worry, I went back and fixed that shiny spot on his shoulder just after taking these pictures) 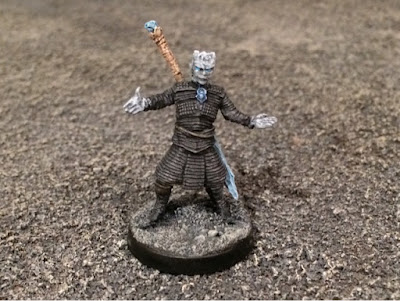 (Ugh, I need to go back and tidy up just under his eye don't I)

Everything else was quickly layered up or washed and then highlighted, until they were done! 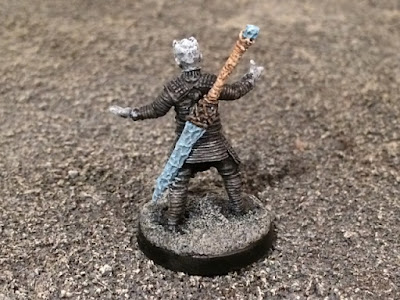 The ice weapons were probably the things that took the most time, as I ended up almost completely repainting them when my initial plan for them resulted in the looking too grey, so I glazed them back down with a couple of coats of Ice Blue and then worked them back up from there (this picture makes the white highlight look a little dull - the picture of the previous chap's sword is closer to true).


Finishing these three chaps brings the Tally to:

Now that this little mini-project is over for now (although there's always scope to add a couple more Wights to bulk out the horde if it happens to take my fancy - plus, I need to make some Wildlings and Night's Watch for themto terrorise, but that means waiting for plastic Frostgrave barbarians and getting some old LOTR rangers respectively), what to do next? There are the Star Wars thugs that were bumped down the painting queue for Zomtober, but knowing myself as I do it's more likely that I'll grab a single miniature as something of a palette cleanser (and also to take the completed figures this year to 52), the only question is will it be something half done to clear space in the trays or something new? For the last couple of weeks, I've had a sudden hankering for the Horus Heresy, and then they announced Prospero Burns, so maybe I'll kitbash something to scratch that itch... Then again, I'm sure I've got a Santa somewhere I could prep ready for Christmas, but oh wait I'm sure I undercoated the War Doctor...

So, this is my submission for week 3, 4, and potentially 5 of Zomtober 2016 (as we're off to Germany next week, so I'm unlikely to be able to get anything else finished and posted in time): 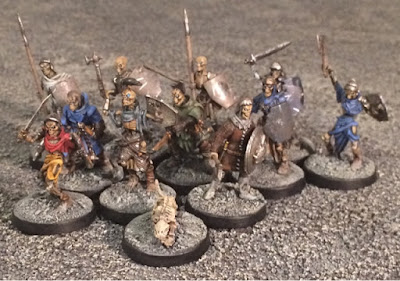 What I've come to refer to as 'skinny Wights' -  a mixture of Mantic, Perry and Frostgrave bits to make some more dessicated wights to supplement the batch I previously completed, inspired by images like this: 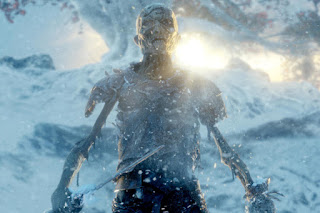 Although I'll admit, the skeletal pup isn't entirely in keeping with the original idea, but it was such a cool little piece that I just couldn't resist...

Especially fun was getting to play with weathering on these miniatures, which isn't something I'd really done much of previously. Enjoy, a selection of some of the shields that got a little extra detail before being weathered to within an inch of their lives: 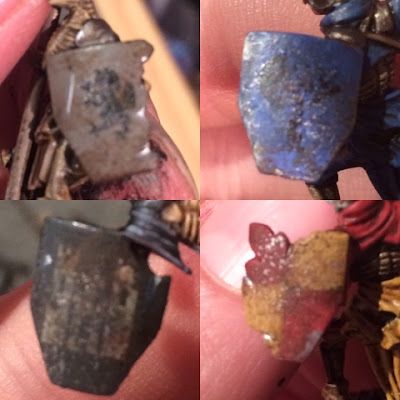 (if you follow me on Instagram you'll recall the trials and tribulations I went through finding where past me had stored my transfer sheets, only to then mostly obscure them with weathering. Eh, c'est la vie!) 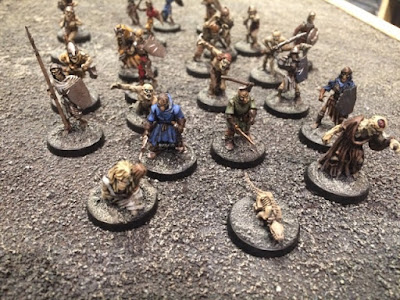 Most importantly, they seem to mix fairly well with the other Wights I've painted, and the slight scale and style discrepancy between the two sets isn't overly jarring, as the 'skinny' wights are meant to look thinner than their more recently deceased comrades! 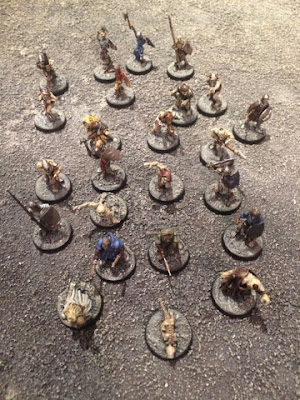 Completing these takes the Tally to:

Only 4 away from hitting an average of one miniature a week for the year, and only 11 away from catching up to last year's total.

And so here they are based for mass battle: 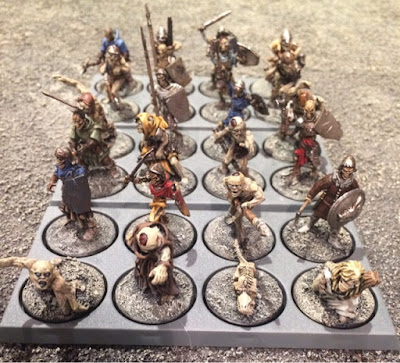 If I paint their icy leaders, I think I could probably knock together another couple of Wights using left over bits from the Mantic sprues and some Perry bits and then have enough miniatures to fill a fourth WOTR base (and then I'll go back and see about adding some dead grass and snow to all of their bases at the same time)

'But you've missed the Sunday deadline' I hear you cry! 'And wait a minute, doesn't week two imply that there should have been a week one?' I hear you add, incredulously, reader voice in my head. Well yes, both of these points are true, in part because I had bigger plans for Zomtober this year, and also in part because I didn't actually refresh myself on the proper format of Zomober until the month had already started!

So, rather than my usual additions to the modern zombie project (that I should really get around to taking stock of one of these days), I thought I'd have a focused theme month of sorting out some wights for the A Song of Ice and Fire project, and here is the first batch completed: 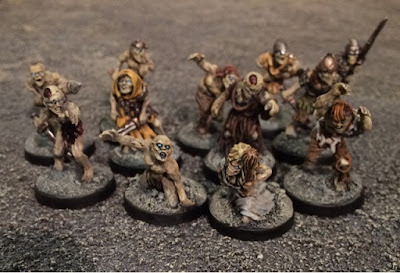 A blister of Revenants from Gripping Beast bought at Salute a couple of years ago, they're a lovely little set of really characterful miniatures. Whilst not technically zombies, they're near enough I think that I can get away with it for Zomtober! 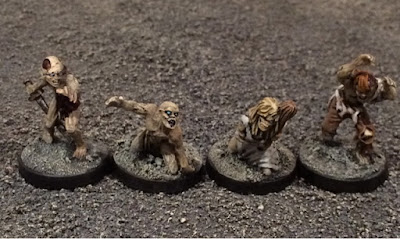 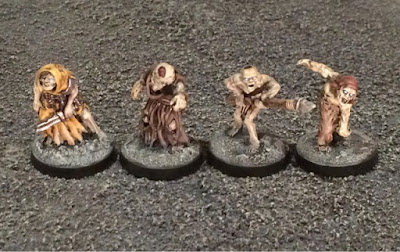 (excuse the weirdly lit pictures here, I think the light behind me fell over while I was taking these pictures) 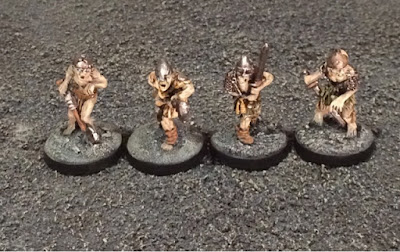 I had great fun painting these, and spent a little extra time adding damage to the metals (adding little chips and dings, and picking out the occasional link on their rusted chainmail with a much lighter metal to give the appearance of really worn, damaged chainmail, in various states of disrepair) - when it came to time to paint the gore thought, it turns out that I apparently haven't painted a zombie in so long that my pot of Tamiya Clear Red has dried up... 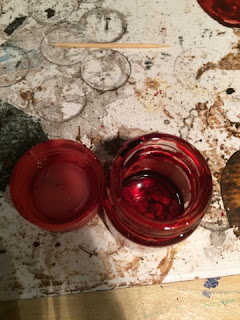 and it turns out that the Games Workshop 'Blood for the Blood God' Technical paint doesn't behave quite the same when you try and mix up a much darker shade... 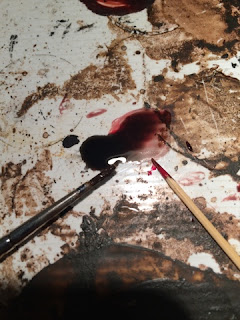 Ah well, I can always go back over it with TCR if I really hate how it looks after giving it a week!

Here they are based ready to be bolstered by some reinforcements for some mass battle action: 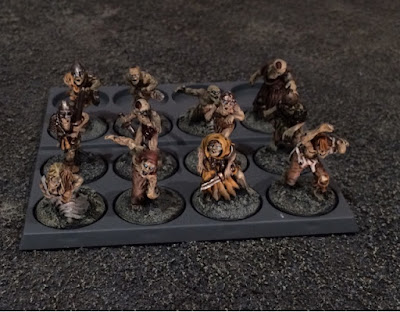 Reinforcements you say? A nice chap over on Instagram sent me a sprue of leftover Mantic skeleton bits so that I could make some more dessicated wights: 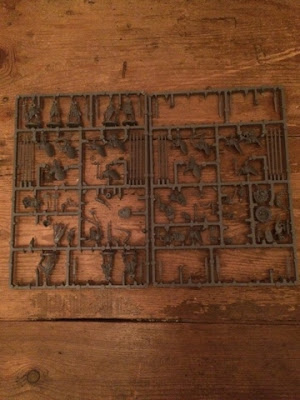 So the combination of finished miniatures and received bits leaves the Tally at:


Once I've finished the next batch I'll go back over all of their bases and add some static grass, and maybe try adding some snow for the first time (I've had a pot of snow flock sat in my desk drawer for a while now but not got up the courage to try it, having seen so many articles on the various methods of doing snow bases - should I scatter it onto glue or mix it into a paste before applying?)

And in the meantime, here's a little preview of an accesory made for one of the next batch of wights (leaving me glad that my old press mould still works and hasn't been damaged in the move!) 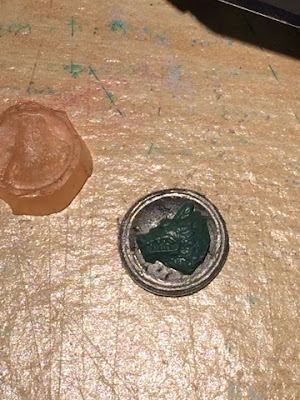 (If I don't get round to finishing and posting the next batch, or the other batch planned for after that by the end of the month, which is entirely possible as we're off to Germany in a fortnight so that our daughter can meet her Great-Grandmother for the first time, pretend I split this post out over several weeks so it still counts for Zomtober, Okay?)
Posted by myincubliss at 21:30 5 comments: