Still beavering away on a few bits (in fact, posting this whilst waiting for a hot glue gun to heat up): 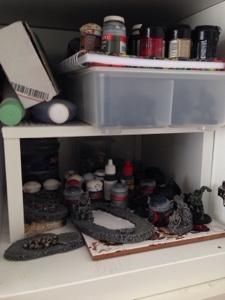 Half-finished scenery project started a couple of years ago that I suddenly thought 'hey, I could easily finish that and post about it' last night. Alas, PVA glue takes a lot longer to dry than I'd expected, so this is currently living in the cupboard of WIPs... 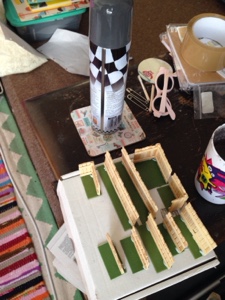 Other half-finished terrain project I'm currently trying to get to the point I can start painting, although as I'm working on it I keep thinking if I make the urban barricade / rubble multipurpose terrain I've been thinking about for a while I could paint it all at the same time and theoretically be more efficient (although realistically it's more likely that I'll just have twice as much half finished terrain awaiting painting next time I hit a productivity lull...)
Welp, in the course of writing this post I've discovered a load of bits of scenery that is put aside for building a graveyard, a bunch more bits of resin urban detritus to potentially go into making barricades, and given up on the hot glue gun as it's cheap and old and the glue is cooling and setting before I can get the two things I'm trying to attach together! Looks like a job for superglue and fervent under breath swearing instead then...
Posted by myincubliss at 17:03 2 comments:

It's been a little while...

...but I've managed to get a couple of bits finished this week! Well, last week really, this post has been sat in my drafts for a little while (8 days now I think?) getting a sentence or two added here or there before being relegated back to limbo!
These minis were mostly sat near-finished on my painting palette, and it was mostly just a case of finishing their basing before snapping a quick pic!
First of all is a figure that I won on a Facebook competition, 'Big T' from Pigeon Guard Games. I realise that I hadn't added him to the tally yet (presumably as the original plan was to paint him fairly quickly and get him posted up ASAP), so I'll get that amended at the end of this post! 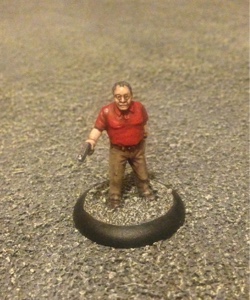 He's a lovely little figure, and potentially the cleanest resin cast I have ever worked with, and will join my band of generic survivor types to get drafted to fight zombies, fungus men or intelligent apes as I see fit! He also came with an alternate hand holding a cigar, which I'll have to see about finding a use for!
A while back (as I may or may not have mentioned on here) the wife and I were working our way through the Marvel movies (as previously we hadn't watched most of them because I am a terrible geek that hates adaptations of everything and it takes me a while before I settle down enough to enjoy such things on their own merits - ridiculous, I know) and so I ended up painting some more Marvel heroes: 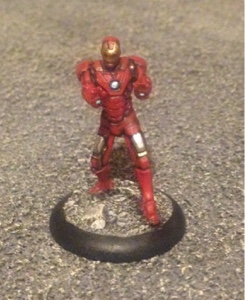 Iron Man! By the third film it's really a case of Tony Stark just saying 'fuck it I'm going to blow holes in my enemies I've had enough of this' 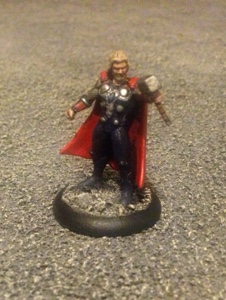 Thor! Terrible sculpt if you look at it for too long, but nice enough at arms length or on the tabletop!
Further proof of how long this post has been sat in Drafts, when I started it I (like so many others) had caved and bought an issue of White Dwarf as for the first time in an age it came with a free man: 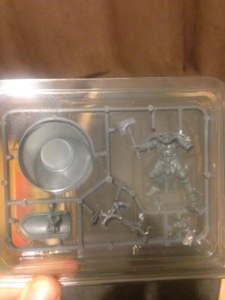 I may base him up on a square base just to set fire to the internet...
Interestingly, I popped back to Games Workshop (or 'Warhammer', as my local branch has now been rebranded) during the week to pick up a second copy so I'd have a spare for conversion purposes (thinking maybe some sort of Space Marine Company Champion or something Inquisitorial perhaps) but it seemed they'd sold out - ah, the age old appeal of the freebie!
So, all in this brings the Tally to:
23 vs 106 = -83
Posted by myincubliss at 23:50 6 comments: