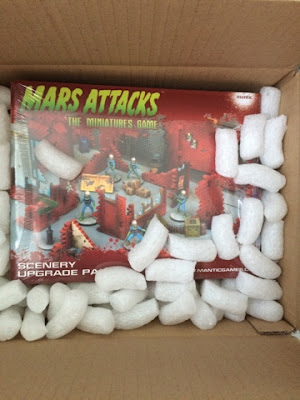 I took advantage of the Northstar Figures sale to grab a discounted Mars Attacks Scenery Upgrade Pack, which is essentially some sprues of ruined building bits to add to other buildings, or can be used to make some Fallout-esque ruins: 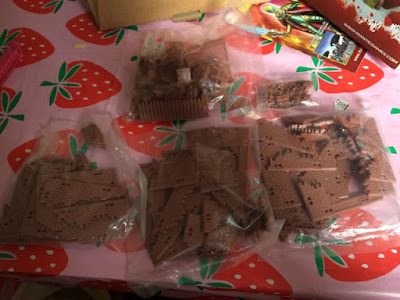 Everything comes handily removed from the sprues, and should be useful for making quite a few bases of ruins! The holes where the connectors clip on will need filling, but I saw an article online that suggested making a green stuff stamp to print the brick design onto the gaps...

In other acquisition news, the builders at work sorted me out with a bag of sawdust so that I can have a crack at making my own flock as per the instructions on Luke's APS YouTube channel: 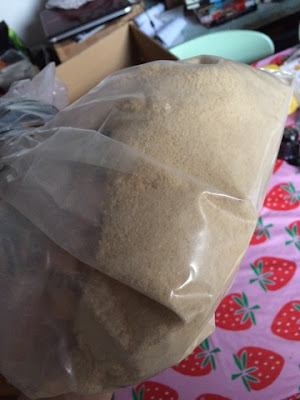 I don't think they had any actual wood that needed sawing, as everything at this point of the build seems to be MDF, so I suspect that the foreman might have just gone and chopped up a random plank to make me some!

In other news, I've started a seperate account on instagram for miniature stuff: https://www.instagram.com/deadleadproject so if you use that, follow me for more regular pictures than posts here (as I tend to mostly only post completed things or WIPs that are several stages in) and so I can see what you're doing!
Posted by myincubliss at 23:07 1 comment:

Having rediscovered the time sink iPad app Star Wars Uprising, I found myself inspired by one of its loading screens: 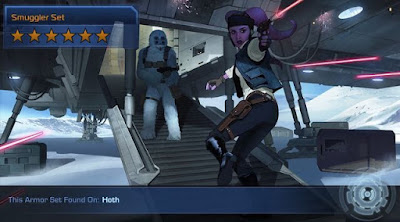 Sure, they've just made Chewbacca into the abominable snowman and made Han a gender swapped Twi'lek, but I think it's pretty cool! I like the idea of a Talz NPC or PC if I were to run the RPG, or worst case scenario he can make up the numbers in a Fringer band when I get round to finishing enough miniature to be able to run a tabletop game...

So, after a quick rummage through my supplies (making sure I still had another spare for when I get round to making a Foul Moudama conversion) I dug out an old Talz spy miniature, and set about separating him from his base, as well as popping off the arm that was on a plug for ease of access to his body: 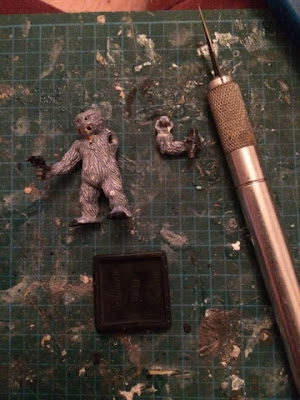 Whilst I wasn't looking to make an exact copy of the character in the picture, I wanted to take several cues from it (mostly the belts and bags) and so set about marking out with a pen where I wanted belts: 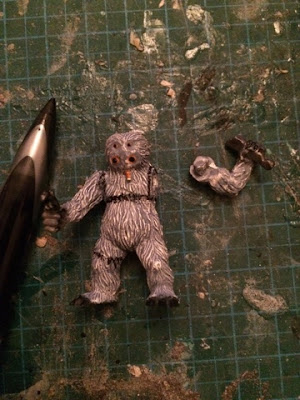 I considered green-stuffing belts on, but thought that it might look a bit scrappy as my green stuff skills are fairly rudimentary, and it would look a bit like the belts were laid on top of his fur rather than he was actually wearing them - so I decided to cut in the belts, figuring that if I didn't like how deep the cut went I could always paint some liquid green stuff into the groove to bulk it back out: Brief side note: despite having spent so much time getting my work desk sorted out, I'm doing this in the living room, as my wife wanted me to watch the Great British Bake Off with her in exchange for watching The Thing with me (because nothing says Happy Anniversary like old school body horror): 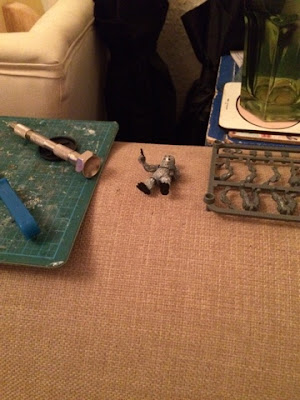 
Surveying the cuts, I think they will look fine without green stuff, so I set about scavenging some pouches. A modern Space Marine sprue provided a set of three for his chest harness, and a freebie Journeyman Bot Handler sprue from Maelstrom's Edge from Spiral Arm Studios that I got at Salute provided another pouch to go on his leg.

Looking at the figure thus far, I thought he could do with a bigger gun than the somewhat scrawny pistol that the figure originally had; so I turned to the freebie sprue again: 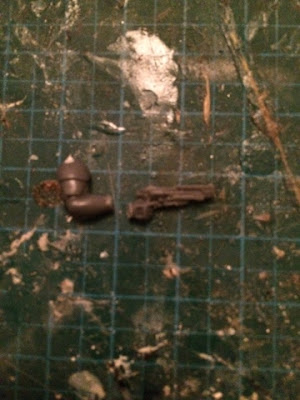 A little trim here, a blob of gel glue there and here we have a completed conversion: 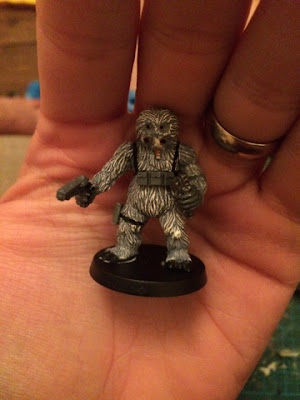 That's a 30mm base he's on, if I recall correctly, to give an impression of what size he is...


I ummed and ahhed for a while over whether to replace the doodad in his left hand (as there was an interesting looking technical aerial... thing on the freebie sprue) but decided to leave it as it is, figuring that it looks enough like a hydrospanner to leave. 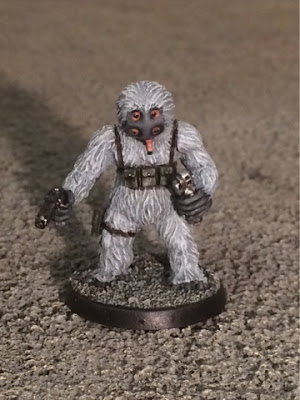 (Pictures were taken with a daylight lamp balanced over my shoulder last night, so are a little better than the usual subterranean nighttime shots, if only by a little) 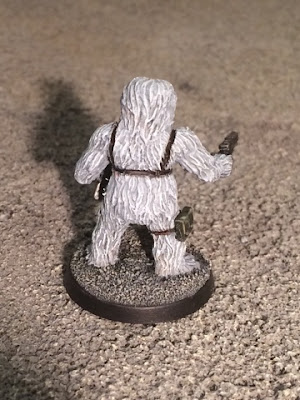 And the back! The straps turned out... passable, I think. A LOT of tidying up around the edges was needed after I dropped some colour into the grooves... 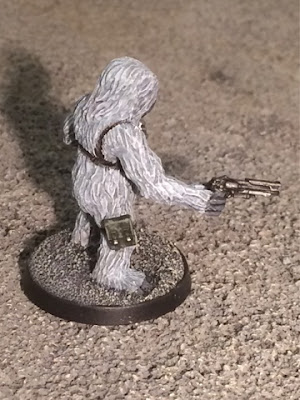 Pow, baggage and his new gun! 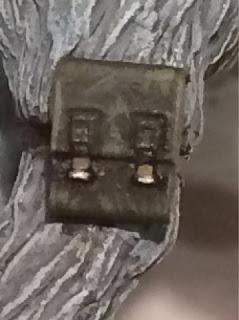 I especially enjoyed weathering the baggage, adding little dings and nicks in a variety of lighter shades, trying to make them look beaten up and lived in!

Another miniature painted takes the Tally to:

What to paint next though? I've got the Star Wars thugs previously showcased undercoated on my desk, as well as some Lannisters for the A Song of Ice and Fire project; an undercoated obscure Batman character and a moderately obscure Batman villain that's had some red base coats and little else, or maybe something else entirely?

In other news, Blogger informs me that this was my 250th post - blimey!
Posted by myincubliss at 18:52 2 comments:

Luke over at Luke's Affordable Painting Service is having a giveaway to celebrate reaching 2000 subscribers, and I'd like to win some Amera terrain, so I'm posting here! Japery aside, if you're a wargamer and aren't already following Luke's series of videos, they're well worth a look - as well as being informative, I enjoy their conversational style, not to mention the fact that Luke's aim seems to be saving everyone a few quid! Plus, he's started investing in the channel, so the production values have gone up - one of the things that turns me off of a video quickest is poor sound quality!

Here's a link to the video where he announces the prize draw:

But do have a dig through his back catalogue of videos - I want to give making my own flock a try when I can get my hands on some sawdust!

Also, White Dwarf has supposedly changed format to be more like the old style (back when I used to actually get it - my wife used to get me a subscription for Christmas every year, until it turned into Visions) and has a free figure on the front that would normally have an RRP of around £18, so of course I picked up a copy: 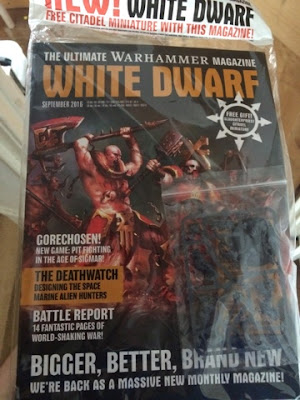 Which takes the Tally to:

My first thought was to use it for an Inq28 conversion (by which I mean chucking it in my bits box for several months whilst looking enviously at all the talented bloggers making things with theirs) but whilst writing this post I suddenly got the urge to roll up a Khornate Path to Glory warband for him to lead... I've not had a chance to actually read the magazine yet, so who knows, maybe I'll be persuaded to rush out and buy a copy of their new Gorechosen game or suddenly be converted to like Age of Sigmar...
Posted by myincubliss at 21:00 1 comment:

So, here's the other miniature that I finished the night I turned thirty that was alluded to in a previous post: 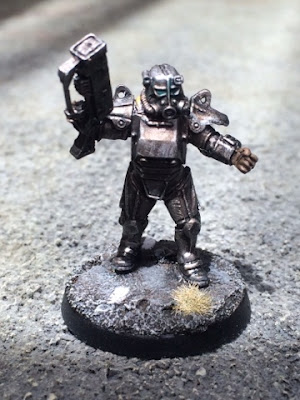 A power armoured chap from Brother Vinni - despite the reference-heavy title of this post, you would not believe how many layers went into the metal on this armour! My usual basecoat, wash, two drybrush highlights method looked a little flat and boring, so I went over it with various targeted washes to grub it up a little, follwed by a newer silver highlight, before scrubbing Mithril Silver and Tin Bitz over it to make it look well-used and worn! 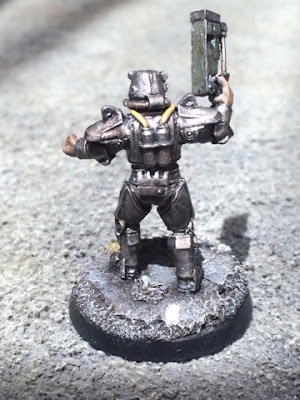 And here's the back - I'm quite pleased with how the weathering came out on the laser rifle, as usually I struggle to get it to look natural...

Completing this miniature doubles the Fallout projects current total - the intention with that project is to eventually complete a couple of 'hero' type mininatures, and a variety of enemy groups, so as to be able to run a small skirmish level exploration game, where players would search the wasteland for weapons and resources, potentially using a card based system for exploration - so when a player searched (in a building, or at a specified objective marker or some similar mechanic) they'd draw a card from a deck, which would either give them some reward, or spawn an enemy or group of enemies, or a neutral character like this power-armoured Brotherhood of Steel Paladin, who might join the player that revealed him's group, or attack them depending on their affiliation... Some playtesting might be required though to see if that system worked!