So, as most of you will know, it was Salute yesterday.

After a fairly problem-free journey up, it was time to hit the queues at the excel centre. As we were a day late to be able to pre-order tickets, we had to join the cash queue. As is becoming traditional, this was not the first queue that we joined. One 'being in the wrong place and then having to trek the length of the centre to join the correct queue' comedy of errors later, and a short wait of about an hour, and it was go time!

This year (barring nipping straight to the Hasslefree stand as soon as I got in as I'd left it too late to pre-oder the bits that I wanted) I did the initial walkaround at breakneck speed, darting from table to stand trying to drink in as much as I could before I got down to the serious business of throwing money at people. Unfortunately, due to my haste, I (as usual, it seems) ended up taking only a limited number of pictures: 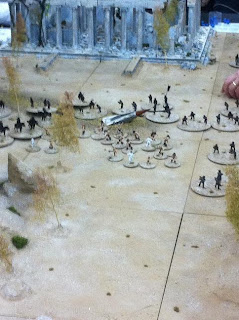 Planet of the Apes table, built by Akula 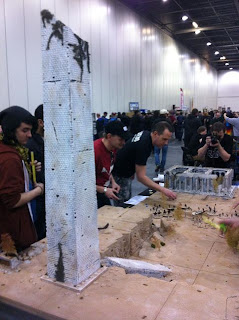 I mean, look at that! I thought I'd grabbed a pic of the subway tunnel under the board, complete with rusting train, but apparently not... 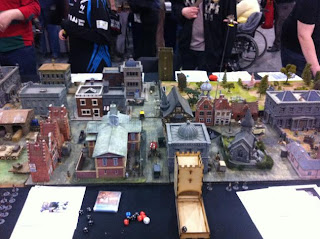 A cool looking In Her Majesty's Name table - I really need to get round to reading the rules and posting about them... 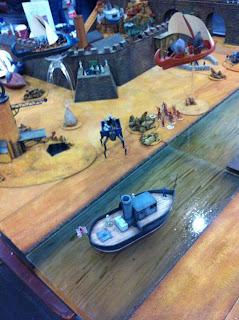 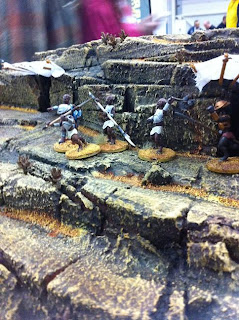 and figures by Red Planet Miniatures. I've had my eyes on these for a while, as although if I ever go back to my VSF project I'll probably go Barsoom-style for my red martians, I quite like these alien looking chaps... 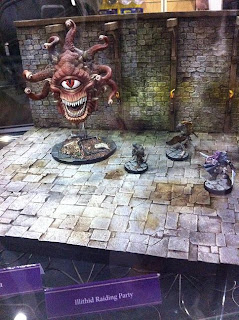 And last but not least, Gale Force 9's limited edition Dungeons & Dragons miniatures. Beautiful, but I had to walk away as I just can't justify spending that much per miniature, even though I really like the dual-wielding Itthilid (although I'm sure I can convert something similar if that itch still needs scratching in a while...)

So, here's why I didn't take more pictures: 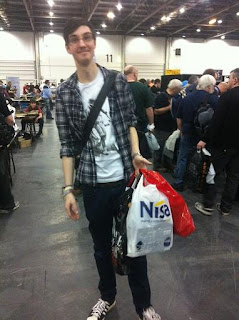 By the end o the show I was lugging around even more bags...

What I came home with was this: 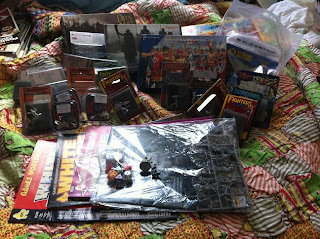 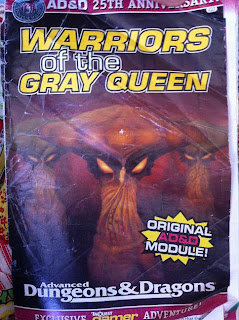 The adventure that originally kindled my love for Myconids, which was only increased when I found the '...Slave Lords' adventures in a charity shop a few years ago.

It's been better, but at the same time I choose to see this as a whole landscape of potential modelling opportunities. Whilst we're trashing any chance of me being back in the green this year is as good a time as any I suppose to add these to the tally: 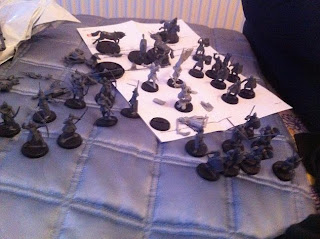 34 men of Minas Tirith, for Lannister House Guard conversions. Annoyingly, there was a bit of a saga with these - they originally arrived a good month or so ago, but arrived in a bag, in some bubble wrap, in a mailer bag - not a sensible way to send fragile miniatures. I messaged the seller, was ignored, messaged the seller, was ignored some more, opened a case to see whether a partial refund for the damage was possible, which the seller continued to ignore... Sadness abounds, especially when the seller eventually messaged me after the case had closed with an unsatisfactory conclusion to tell me that they'd assumed that my message informing them that the miniatures had arrived damaged wasn't cause for any action to be taken or any response, but merely a handy tip that they could use to be more informed, and do better in future transactions. Bah to people sometimes.

Angermode over, that leaves the tally actually standing at:

Which is even worse when you think about the stuff that was left on my list at the end of the day:


I kind of wish I'd picked up a pack of the Perry mounted Yorkist command, to use as the basis for some character conversions (Jaime especially), as well as some more random medievals, but all in I think it was quite a haul...
Posted by myincubliss at 14:04 4 comments:

On the way to Salute

And so it begins, as we wend our weary way to fabled Londinium for Salute. Oddly, it's the first year that I've not been out drinking the night before (as we celebrated the friend who's birthday it is this week last week rather than last night) but getting out of bed seems harder this year...

Unusually, I have a list this year rather than just picking up shinies:

So if anyone happens to stumble across any of those, leave them be! 😉

(and yes, I'm buying my young lady her own dice for the upcoming dungeons and dragons fest - I'm hopelessly devoted to her, I'd give her a kidney, but she needs her own dice. I was raised to believe sharing dice is worse than sharing needles)

So, off to sit on a coach for a while with the next song of ice and fire novel... 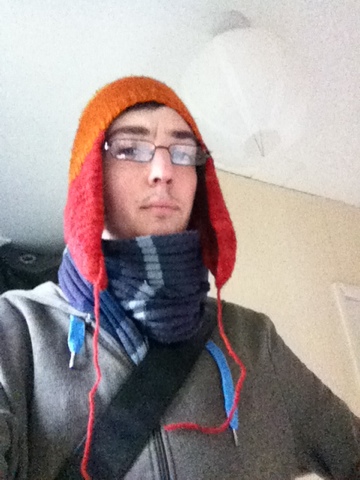 Which is very exciting, despite my oldest and dearest friend who's a web analyst having previously told me that in the trade 'hits' is an acronym for 'How Idiots Track Success'. Screw him though, I'm happy! 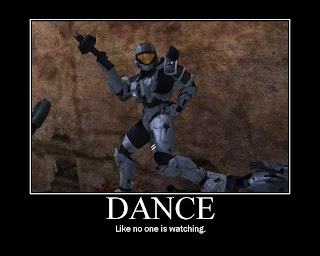 In other news, work continues apace (well, apace might be a little generous) on painting miniatures for the Dungeons and Dragons game I'm going to run, as the 8 half-painted miniatures sat next to me attest too. I've had terrible trouble with these, and had to use a lot of glazes to tie layers together, but that's a gripe for a later post...

Semi-related, I've had a miniature arrive that doesn't go on the tally... because it's my young lady's. Having finally rolled up her character, she set about choosing a miniature, and decided on this Reaper sculpt for her gnome swordmage: 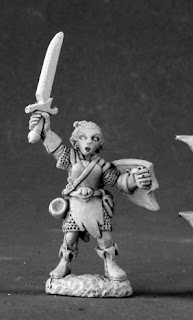 She's also decided that she wants to paint it, which was something of a surprise, but exciting nevertheless. I've dug out my copy of Kevin Dallimore's Painting & Modelling Guide, and we'll see how it goes from there... (although there's every chance it'll end in her throwing a paintbrush at me as I offer words of encouragement, but I remain cautiously optimistic...)

Last but not least, it's four days until Salute! Unusually for me, this year I have things I'm actually looking to buy rather than just mooching around picking up random shinies that take my fancy (although that will still happen, don't you worry!) - historical miniatures for Game of Thrones! Perry, Fireforge, exciting times abound! I may even make a shopping list, but that might take the fun out of it... (plus, I really need to decide if I'm going to pre-order some Hasslefree minis, as I'm rapidly running out of time!)

Right, off to start Borderlands for 7 hours of Xbox, and in all possibility start a new project. I sometimes wonder if there's a technical term for the condition whereby I think of any form of media in terms of how I could turn it into a modelling project...
Posted by myincubliss at 10:20 6 comments: