It's a good bet the Empire knows we're here... 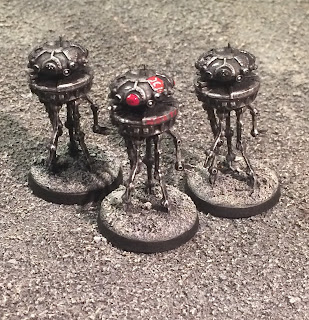 Painted up the pack of Probe Droids from Star Wars Imperial Assault. They were painted vaguely following the tutorial Sorastro put up on Youtube - vaguely in that I watched it a couple of months before starting painting, and then watched it again once I was too far into the painting process to change anything. 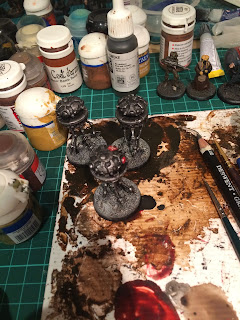 I went for a fairly dark scheme, with some bright nicks of weathering. The bases took some more doing than usual, as since the models are so flimsy there was a lot of careful glueing involved to get them to bond to their new bases, which seemed to disagree with the sand staying where I wanted it. Two were glued using tiny contact points, whereas the third I managed to trim down the base without the legs all snapping off and so smoothed the edges down with filler before applying grit and sand. 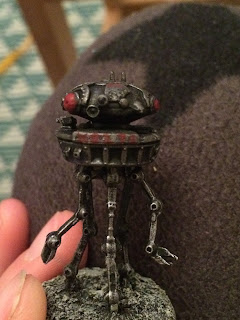 To make the Elite figure stand out, I decided to give it red lenses and some markings - cue some frantic digging through every Star Wars reference book in my house looking for a reference chart of Aurebesh (the Star Wars alphabet) only to discover that it's in the Star Wars Miniature Battles rulebook, which is Uncle Johnny's, so I googled it: 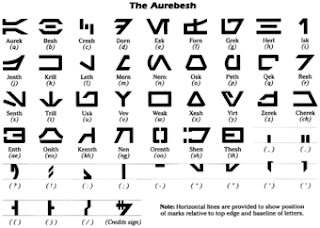 If you peer at it, you can just about make out AB172 on the side of the Elite probe droid (chosen for the same reason my Fallout survivor is from Vault 172), as well as very carefully painting an Aurek on top of the droid. I then looked at it at arm's length and figured that the small red symbol wasn't obvious enough to differentiate between the different droids, so I repainted the entire panel red and repainted the Aurek in white. Then, as per the Sorastro video, I gave all of the lenses a coat of GW 'Ardcoat to give them a glossy, reflective finish.

In other news, I spent part of my afternoon sieving bits of shell out of Wilkos £1 bird sand. After explaining to our local Labour MP that that was what one of the two tea strainers my daughter was holding was for when she asked. As you do.

Updated adventures in my stripping pot

For the first time in several years, I've completely emptied out my stripping pot! 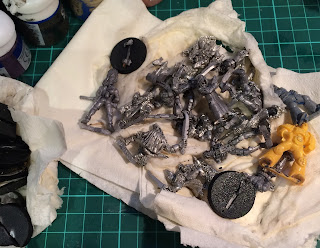 Well, it really was an odd mix of bits and bobs - some metal Skaven Gutter Runners; some broken plastic marines that I think I had vague plans to try and refurbish into Heresy era marines; a couple of em4 post apocalyptic savages dug out of the miniature drawers to use as Fallout Raiders; an em4 figure that I'd earmarked as a potential basis for a Dirty Frank conversion but may have to abandon until I can find a more hunched figure; and a batch of em4 'not-terminators' that I'm torn between modelling as Fallout Synths or Hutt Battle droids for Star Wars (like the ones that appeared in the now defunct mobile game Star Wars Uprising), although I think with some careful colour choices I think I might be able to get away with using them for both...

I'm not intentionally working through them in order, I swear! Note to future Olly - watch some Planet of the Apes and get cracking on the monkey box!

In other news, I also reread pretty much the entirety of Sinister Dexter, so have a hankering to place a little order with East Riding Miniatures for a set of miniatures that look somewhat uncannily like the eponymous hitmen from the series. I have absolutely no use for them, realistically, though, so I might be able to resist. 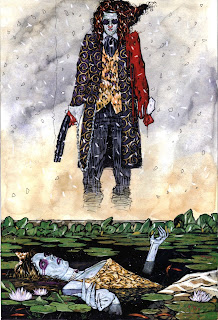 As one of the challenges featured in the Challenge involved replacing all of the tokens in the Star Wars Imperial Assault core set with miniatures, and another involved painting all the miniatures from said set, I thought I'd come up with a list of what I needed to complete (and links to what I have already previously completed proxies of):

You have failed me for the last time!

Painted up a couple of Imperial Officers, because Darth Vader needs someone to show off his ability to choke people using the Force on: 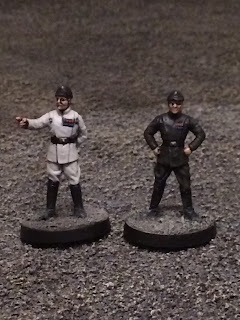 The chap on the left (who holds the rank of Admiral, according to the rank bar on his chest) was painted up as a member of the Imperial Security Bureau, because I figured that if I ever got round to running a Star Wars RPG he'd make a handy mid level villain, or even do nicely for an Elite Imperial Officer in Star Wars Imperial Assault. The chap on the right however was painted as a generic deck officer, and so got a more subdued greeny-grey uniform. If I do any more officers, they will probably get a light grey uniform, which fits how they appear in my memory if not in any of my research!

As the figures were originally bendy prepaints, the detail is a little soft (especially on the face of the figure on the right), but I think they've come out alright overall. Fun fact: these two figures were originally based and prepped on 30mm DS bases, as I'd planned to use the as Alliance Officers for the Firefly/Serenity project that has been on the back burner for a while now, and so were recently plucked from limbo and rebased to rejoin the Star Wars project!

Making the wastes secure from what exactly?

The next miniature to make it's way out of the painting queue is this, a Fallout Securitron: 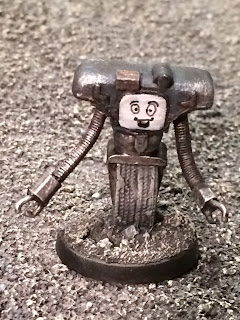 Well, officially it's a monobot from Black Cat Bases iirc, but we're among friends here so we'll just acknowledge what it is heavily influenced by!

While I was a big Fallout 3 fan, and was excited enough by New Vegas to preorder the expensive Collectors Edition, something about it just didn't click with me, and I barely played it. I think I imagined that I'd go back to it one day (as often tends to be the case - if something doesn't grab me the first or second try, chances are I'm going to fall pretty hard for it the third time!) but in this case that just never happened, and is unlikely to now as we're a whole console generation ahead... The Securitrons from New Vegas are a nice robot design though, so I was happy to add one to the Lead Mountain when I saw this!

His goofy face is heavily influenced by Yes Man, and was added with careful use of the micron pen that I usually use for dotting in pupils. 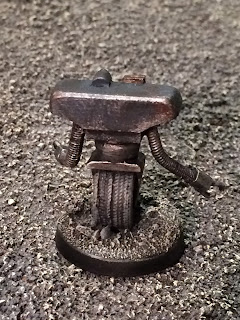 Mmm, weathering. Modelling anything Fallout related offers a lot of opportunities for a young man to enjoy himself with a sponge! Ignore the slightly waffy wheel though, that was a bit of dodgy casting... 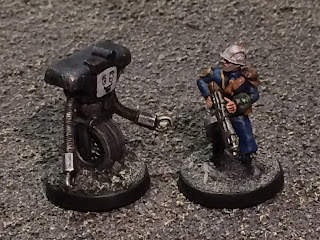 I think when I get around to finalising rules for the Fallout project, he'll be an encounter card where he is a hostile enemy unless you can pass an Intelligence test to reprogram him, in which case he will join your character as a companion.

Rey the Force be with you

As is my incredibly inconsistent tradition, I painted up something thematic for May the Fourth: 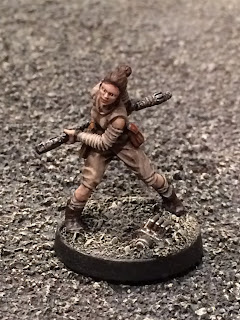 A Rey that's very difficult to photograph, due to her dynamic pose, but satisfying nevertheless. 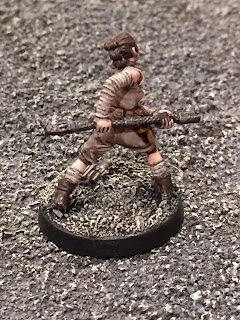 As is the case with all Hasslefree Miniatures, she was an absolute pleasure to paint - enough detail to enjoy painting, but not so much fussy detail that you spend ages painting gems and pouches only to feel like you're making zero progress. The face is especially nice. Also, highlighting all or the rags was surprisingly therepeutic, whereas normally I'd just give them a drybrush and move onto the next piece!

I also added a piece to her base from a Maelstrom's Edge sprue that came in my Salute goody-bag last year so that it looks like she's fighting to defend a piece of salvage from other scavengers.

An elegant weapon for a more civilized age...

When I originally put together my initial Lannister warband, I built the ranged warriors with bows, figuring that it was an appropriate weapon, and vaguely considering perhaps including some crossbows when I got around to making the more heavily armoured Lannister House Guard, thinking that that would add to the look of them as an elite unit. However, when reading a post by Captain Blood over on the LAF about his Robin Hood project, he made the point that the longbow is traditionally the weapon of the plucky underdog, the the common man champion of right and justice, whereas the crossbow is the weapon of the snooty oppressor, and I knew I had to make some for my Lannisters!

And thus, we have four crosbowmen in lovely red and yellow: 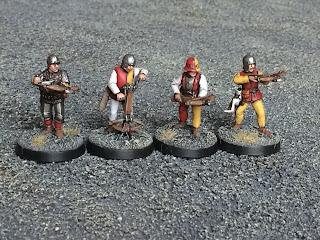 As per usual, they're a mix of bits from various Perry WOTR kits - probably about 90% from the Mercenaries sprues, although truth be told I don't pay a lot of attention to where the bits come from while I'm kitbashing!

These were as ever a pleasure to paint, although at times I ended up scrolling through google images trying to work out what material each part of the crossbow should be (the winder thing especially) and ended up winging it a lot of the time! I also painted these to match the previous miniatures completed, so no eyes, fairly scruffy, a maximum of 3 layers (not including washes) used for most colours - thanks past me for setting the bar low!

This takes my Lannister forces up to a respectable 24 models: 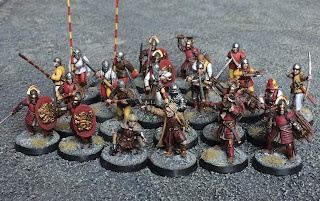 Although I'd like to add some more pikemen, and maybe some cavalry, and should probably finish painting the Mountain... And then finish working out stats and point values for everything so that I can work out what else I'd need to paint to make them a workable gaming force...

Tally
17 vs 40 = -23
Plus, I get to knock off another Challenge! There were a number of times when I was sorely tempted to start something new and just reset the counter (one of which I'll hopefully be able to speedily sort and paint and post this week!), but I'm glad that I managed to stick with it!
2017 Challenges:

Writing this post, it turns out that it's been two years to the day since I last added anything to my Lannisters - how did that happen?!

Next on the ASOIAF / Game of Thrones front will probably be some wildlings to go with the Others that I painted last year though, which will then need some Night's Watch to go with them - I don't suppose anyone has any LotR rangers that they want to trade?
Posted by myincubliss at 08:00 1 comment: