Champion of the downtrodden…

Another mini finished for the Skaven army, this time a lovely old sculpt that will be the Claw Leader/Champion in my unit of Clanrats. 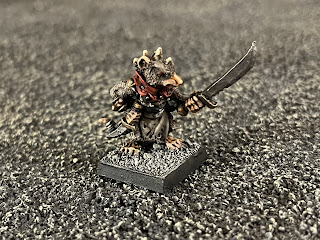 He’s from Vampifan’s collection, so I painted him singly rather than in a mass of his furry brethren, and like every Skaven sculpt of this era it’s a joy to paint, well detailed without being fussy. 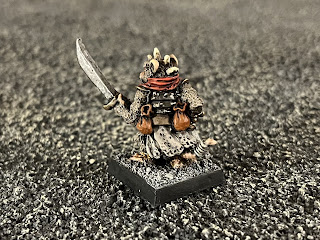 As ever you’ll have to take my word for it that the pictures don’t do the model justice, he’s much nicer in hand than he looks magnified here!

I think I’ve also decided on a colour scheme for my army, which you’d think I’d have settled on before painting 30 odd minis for it… The plan is to go with GW Dark Reaper as a spot colour on the majority of troops, with a red (like the Claw Leader’s scarf) reserved for characters and important rats. I read through the Skaven uniform book, but after long considering the options there decided to just ignore it all and go with my gut.

This mini has actually been nearly finished for the best part of a fortnight, but last weekend we took the kids on a trial run camping in grandma’s garden before we take them out into the actual wilds, which impacted my painting time (but did give me the opportunity to move from the first to the second Gotrek & Felix omnibus, so my enthusiasm for Warhammer remains high!) - all that actually needed finishing off was painting his teeth and then washing those and his horns with a little sepia, so easily done.

Painting him brings the Tally to:

And the Skaven army points total to:

Only the rest of the Clanrat unit, two characters, and an artillery piece to go!

In other news, I’ve rediscovered my love for the fluff and lore of the Warmachine universe, which I was steadily making my way through (back in the almost forgotten era of 2019), and have resumed making my way through pdfs of No Quarter magazine and eBay is furnishing me with the last physical expansion book that I didn’t yet own, and there might also be a miniature bought purely for nostalgia purposes on its way too… of course, plans for a ‘small scale, nothing crazy’ project are forming. Plus GW previewed some new LotR stuff, and despite the fact that I wouldn’t describe myself as a LotR fan I still find myself thinking about how easy it would be to slot in a little Battle Companies project, it’s only 6 minis and I could convert them from my bits box, although those metal minis of Osgiliath veterans are nice too, maybe I’ll just have a look…

I have a problem.