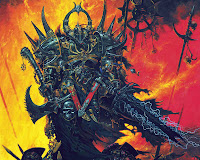 Many, many (many!) moons ago, I decided that I was going to update the Path to Glory rules and play some low model count games. As you'll note if you followed that link, that was in fact over 2 years ago (and in fact, the draft of this blog post where I was determined to actually get round to doing it was from February of this year). But now, the stars have aligned, and I've finally done it (well, updated the rules. Still need to play some games).

This style of skirmish war gaming is to my generation what oldhammer is to everyone else (and anyway,  was inspired by nostalgia for the old Realm of Chaos books), so I fancied bringing it up to date. Of course, all content is copyright and tm Games Workshop, but I'm rearranging it a bit to suit my needs! If we're feeling exceptionally fancy, we might say that its a post-modern take on an established mini-game set in the Warhammer setting, but that be a little grandiose!


As you may or may not remember Path to Glory has had a couple of incarnations: the original, printed over the course of a couple of months in White Dwarf's heyday (remember, when there were articles that inspired you to pick up your paints or your modelling tools?), and the more recent redo, that I really need to look up dates/issue numbers for [edit - came out around the same time as the 7th edition Warriors of Chaos book]


The former was spiritually more similar to the original Realm of Chaos warbands rules, with its mix of Chaos Warriors, Beastmen and monsters, whereas the latter, although more streamlined in terms of balance and equipment selection, was more restrictive in model selection, as warbands could only comprise of models from the Warriors of Chaos Army Book (as by this point in time, Chaos had been split into three separate armies for WFB) - although it's better for a player not to have to buy three separate books to play a mini game, I'm all for the 'oldschool' feel of the original rules, so will be using these as my guideline.


Essentially, this set of rules is 90% the same as those originally produced by Anthony Reynolds (cheers for doing all the hard work!), with the balance of the latter release (and the addition of the Forsaken troop type) overlaid over the tables of the original, and then forced through a sieve to bring it from 7th to 8th edition (by someone who last actually played a game during 6th...)


I'm not going to claim that I'm doing this now to tie-in with the Endtimes, although I can think of worse ways to go about it than to split a box of Putrid Blightkings with a few buddies and play a mini campaign representing several Nurgle champions rallying warbands to join Whatsisface the Mighty's horde as they march South to sack Kislev… Truth be told, it’s a combination of factors - I’ve been looking for something small scale that I could actually get a game of in while my attention span lasted, mixed with a Corehammer post about looking for something fun [may not actually be about looking for something fun, but that's the message I took from it looking back...], crossed with having a series of Coach and Train journeys down Portsmouth way giving me several hours with a notebook and smartphone to actually crack on with the rules! So also, before anyone complains about any formatting issues, this update was written almost entirely on my iphone, using a somewhat limited app, so it’s a miracle there’s anything to share at all...


Less rambling, more links to documents to allow people to play an updated skirmish campaign featuring Chaos Warbands duking it out in the Northern Wastes:

I was originally going to have it available just as a long, rambling blog post, but unfortunately originally being written in an iphone app, the only way I could seem to transfer it to my laptop without screwing all the formatting and destroying all of the carefully constructed tables (of which there are many) was to host it as a Google Doc, so it's probably most straightforward just to offer the link rather than trying to transfer it to yet another program!

So, presumably you've read through the entire document, and are thinking what else is there we need? Off the top of my head, the first thing would be some scenarios, although the 5 listed in the later Path to Glory Packet would be a good start, as well as the fact that pretty much any scenario from Mordheim or Warhammer Skirmish/Warbands could be fairly easily adapted... Ideas for a narrative campaign might be fun too, something along the lines of interspersing a straightforward campaign with the occasional special scenario, whereby the competing Champions get together for a multiplayer bash, the winner of which is rewarded with a special artefact or boon (if you were going Storm of Chaos era, it could even be accruing the dread artefacts of Chaos needed to proclaim themselves the next Everchosen...)


I borrowed and mashed up these rules for my own purposes, so feel free to do the same! If you do though, drop me a line (either by leaving a comment here or emailing me at myincubliss [at] gmail [dot] com), because I'd love to see!
Posted by myincubliss at 21:46 No comments: