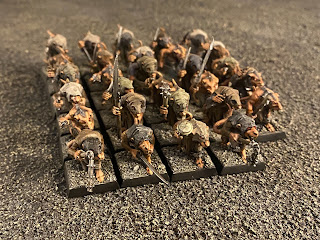 And here they are again, in actual natural light: 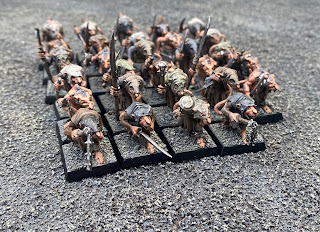 The downside to which being every flaw on these secondhand miniatures that I stripped is more visible in this picture, but for 2 points a model I don’t think I’ll lose any sleep over that. Pretend that lump on the bell is a specifically modelled clapper, wouldn’t you?

When you add the singular model for this unit I’d previously painted (last year!), we get my second complete unit for the Road to the Old World challenge: 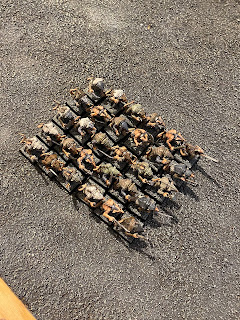 Being that they’re only Skavenslaves, this isn’t a huge amount of points out of what I need to paint - between this and my rat dart, the running total of painted Skaven is now 85 points. Still quite a way to get to 500… on the other hand, in painting this unit I’ve now painted more models than my opponent will have to for his whole army, so who’s the real winner here?

Painting these brings the Tally to:

Now having a proper unit to shove around, I thought I’d see about making a movement tray. I dug out some materials from the basement: 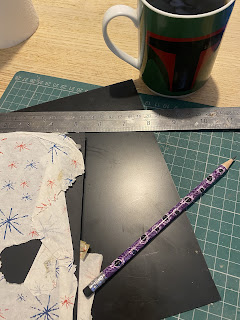 And, suitably fortified with coffee, after sketching out what I wanted (a square base, with a lip around the edge that I could hopefully fold up) I tested it using the actual unit, as my ability to produce squares is not always perfect): 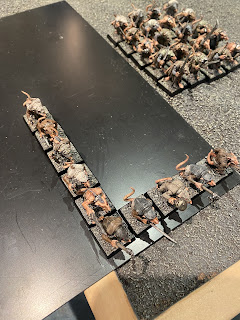 Then I cut it out, and removed the corners to allow the excess ‘lip’ I’d allowed for to be folded up. 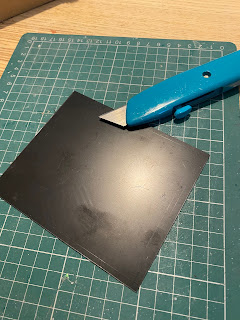 Now, in my planning I’d assumed I’d be able to gently score the plasticard, fold it up, then superglue the corners in place. In theory maybe, but in practice it was much less accommodating. A quick Google suggested that heat was the best way to bend plasticard, so off to the kettle I ran, much to my wife’s bemusement. 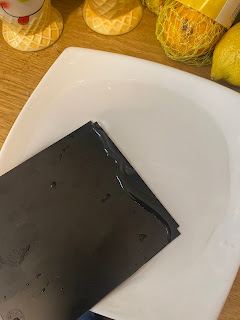 This however was also a non-starter, and I was largely just mangling this poor piece of plasticard. so I set about drying and flattening it back into shape (additional weights courtesy of my son): 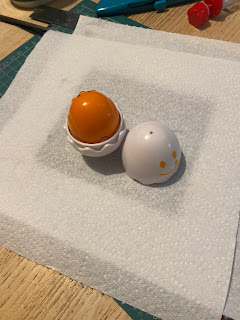 Plan B: cut out some strips of plasticard that I can glue down to form the lip. Lesson learned from initial attempts at that though is you should cut the thin strips off of a whole sheet rather than trying to trim them out of a pre-cut piece, as tiny pieces of plasticard bend and slide under your metal ruler like there’s no tomorrow when you try and cut them. I’m tempted to use matchsticks instead, but worry that they will look even more shonky than my initial plans.
I could order some from Warbases, or crack open the single pack of Warhammer modular movement trays that I have stashed, but the thing holding me back from pulling the trigger on either of those is that I’m still undecided on whether I’m going to expand the units at a higher point value, and being that my modular movement trays are a finite resource I might end up using them up to make smaller bases than I end up needing…
What’s next? Probably more Skaven, although there might be a little palette cleanser or two in there as well. The next unit might get painted in smaller batches rather than all at once - I’d probably have done more detail and highlights on this unit if they weren’t such a big blob, where it got to the point where I was just glad to see the back of them on my painting tile. Maybe five at a time for the Clanrats? But then again, that’s pretty much what the plan was for these guys, before I got carried away…
Posted by myincubliss at 14:54 2 comments: