A handy tip for removing prepaints from their bases!

Digging through some older photos on my phone, I came across one that I meant to include with a previous post but must have overlooked: 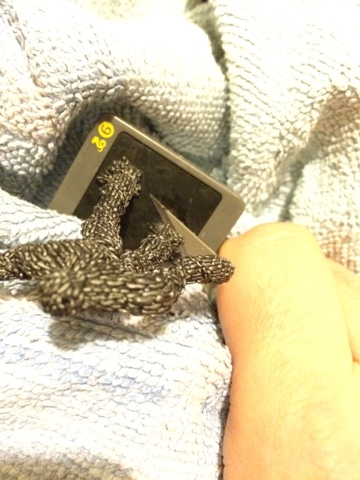 A handy tip I picked up from a random YouTube video (I forget who from, but it may have been bensrpgpile) for removing plastic prepainted figures from their bases without the usual bloodshed - hold the figure in a towel, so if the knife does inevitably slip, it hits the towel rather than sinking straight into the delicate flesh of your fingers! I can't believe I've just been mangling myself doing this for the last decade or so...
Posted by myincubliss at 18:47 No comments:

A prize and a project pledge

First of all, this came in the post the other day: 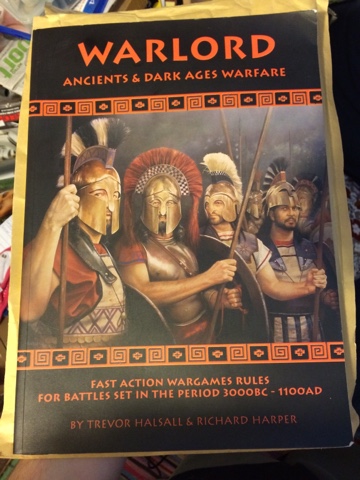 A prize from the draw over on the lovely Ray's blog (who I'm sure you're all following already) - I almost missed out on this, as when the battery in my old phone started mysteriously swelling, as well as losing all my photos I lost my blogroll (and can't seem to get it back, despite several pleas to Bloglovin, the app I use for reading blogs on mobile devices) so I haven't been able to see anyone's posts for about s month now :/ luckily, Ray tracked me down and let me know I'd won though, so hoorah!

And now, a pledge.

I have a lot of half-painted miniatures.

When I was much younger, and just getting back into this wargaming lark (painting miniatures from Darkson Designs for AE:WWII), I had a system - three small trays, each of which was probably large enough to hold 3 based miniatures. I didn't let myself start anything new until I'd cleared a space on a tray by finishing a miniature, and so would often force myself to finish something because I was desperate to paint something else that had caught my eye! Over time, my adherence to this system lapsed, and now I have several drawers full of half-painted (or in some cases just undercoated) miniatures.

So, I'm going to try and reinstate the project box in place of the three tray system: 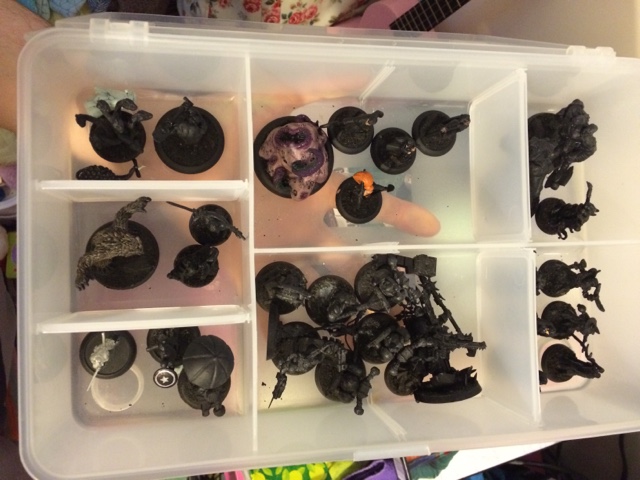 It's currently full of various half-painted miniatures (all of which got popped in here at one point or another 'just to tidy them out of the way until I finish them' - as a brief aside, I thought my long-ago built but never finished Path To Glory war band was in this box, but looking at the picture whilst writing this post I can clearly see that they're not, and am wondering where I've put them...) and I plan to only work on miniatures that are currently in progress in the box, and will not build or undercoat any new models until there is a suitable space in the box for them (although before I embark on this I might swap some miniatures out from the project box for something from the drawers - maybe I'll give myself an out of 'I can only take something out of the box if I swap it for an equivalent volume of half-painted miniatures').

That doesn't sound so bad, I hear you say?

I'm also including the rest of the miniatures in the cupboard where this box lives in that: 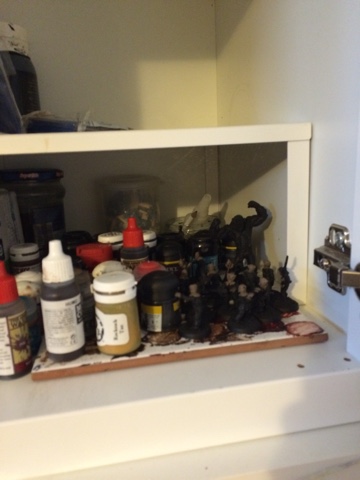 So only once that volume of miniatures is reduced to the point that I have space in the project box can I start something new.
My, that's a lot of scarecrows.

I like Batman's roster of villains - you've got the Joker, insanity personified; the scarecrow, the master of Fear; but then you've got guys like Garfield Lynns, a pyromaniac who gets taken under the wing of Killer Moth (chortle) and so pootles around with a pair of wings and a flamethrower. Chortling aside, he makes a few appearances that I've enjoyed in the Batman comics I'm currently reading (Knightfall era), including one where he gets a girlfriend, but she is disappointed to discover that his idea of the next step in their relationship is murdering her with fire whilst ranting about how he sees ladies dancing in the flames rather than anything more traditional. Also, my decision to pluck him out of the half-painted queue might have been affected by wanting to be able to post this screen-cap on here:

A mighty foe for the Batman indeed, foiled only by fire escapes (and yes, I am amused enough by comics panels that are amusing out out context to have a Pinterest board solely dedicated to them)
But anyway, blathering aside, here's what I've painted: 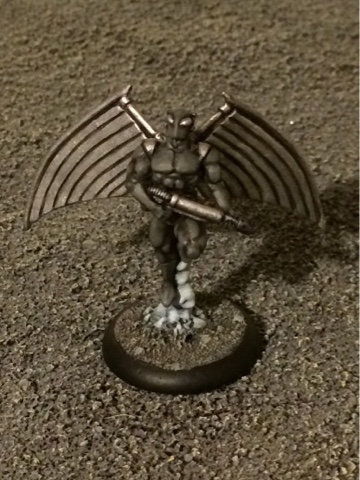 One of the nicest heroclix sculpts I've come across, if I recall correctly after his long bath in fairy power spray (that removed approximately 0% of the original paint job) he was actually four seraparate pieces that go together so seamlessly you'd barely notice.
Quite a limited colour palette (all the better to paint you quickly with my dear!), but a nice finish overall; I had a play with mixing some purple and blue glazes to make the nozzle of his flamethrower look somewhat heat-damaged, but I think I may have taken it a bit too far... 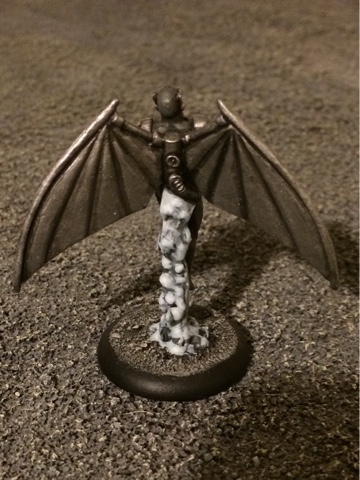 The smoke was surprisingly fun to paint, gradually lightening and smooshing colours around on it!
Finishing him brings the Tally to:
2 vs 0 = +2
Posted by myincubliss at 09:55 2 comments:

I briefly attempted to get some more work done on a set of rules for gaming Star Wars today (after it took me a week or so to find my notes, and when I did it turned out I'd completed a lot less than I thought I had) but my daughter had other ideas: 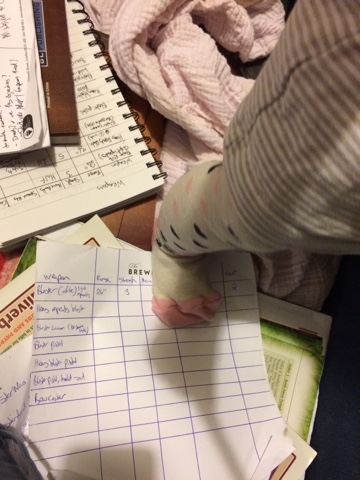 I wasn't convinced on her ideas for Darth Vader's stats either. 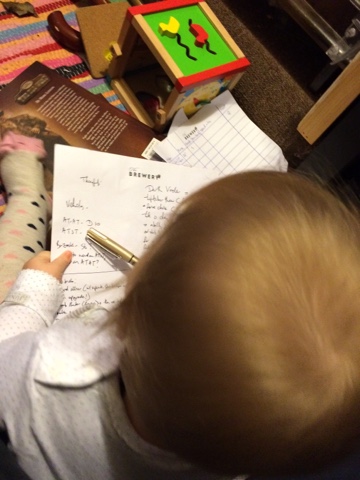 If you don't forward this golem to ten friends terrible things will happen...

A new year means a fresh start on the Tally, so I thought I'd start work on a bit of a buffer with something nice and easy - a chain golem, pretty much only one colour!
He's an old sculpt from the Dreamblade CMG that I have a bunch of after running a demo many years ago when it first launched - the scale is a bit iffy on the majority of the human sculpts, but anything monstrous is generally usable with the rest of my collection! 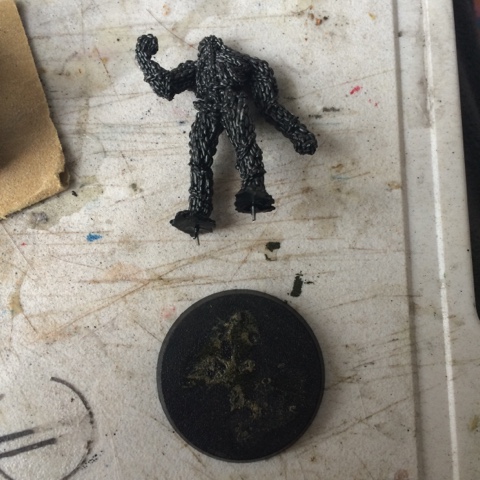 Originally planned as a one day fell swoop, it actually took much longer than that, mostly due to my inability to find my pin vice for several days (which ended up being in the drawer where it always lives, that I had already checked at least three times...)
[edit to add something I forgot to mention several hours after posting] - please ignore the scrappy base, apparently I have already scavenged every terminator base from every 40K starter set I have, so I had to dig one out of the bottom of my A Song of Ice and Fire project box, from an eBay lot of LOTR figures, which were covered in an ungodly amount of glue that I had to pick and sand off! 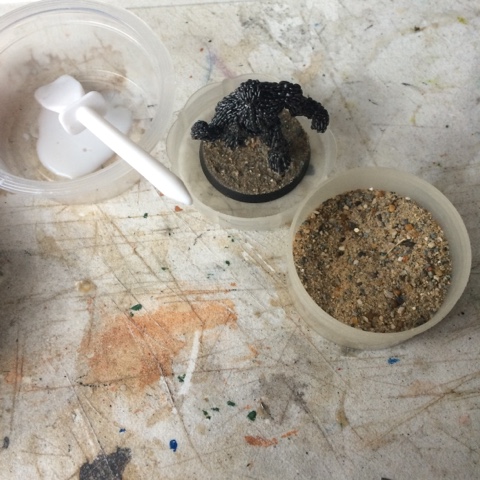 After years of using battered paintbrushes and cut down matchsticks to awkwardly spread glue on bases, I've discovered that a glue spreader (like the ones you used in primary school) is actually the perfect tool for the job (although I shouldn't have been surprised really, as the clue is in the name!) 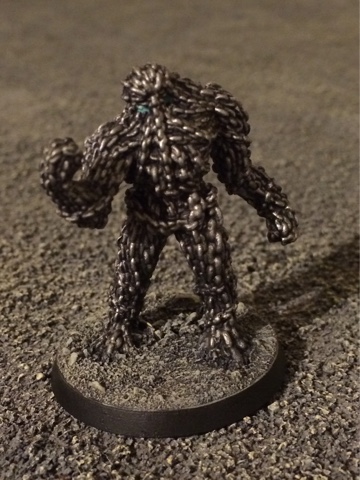 Pow, one completed chain golem, base coated, washed, and then drybrushed up. And then washed again in several key places, as the GW dry silver paint (I forget what it's called) is terrible and seemed to leech into some of the indents...
I went for turquoise eyes for a couple of reasons:
1 - my wife chose that pot of paint, so brownie points for using it (see, I do need more than the hundreds of pots of paint I already have, honest)
2 - red seems so cliched - what if he's not an inherently evil golem? Why limit myself to that?
If I were to paint him again, I'd probably work on some rust effects, and maybe some dried blood, but as he's being painted this time as a quickly Tally booster he stays factory fresh! 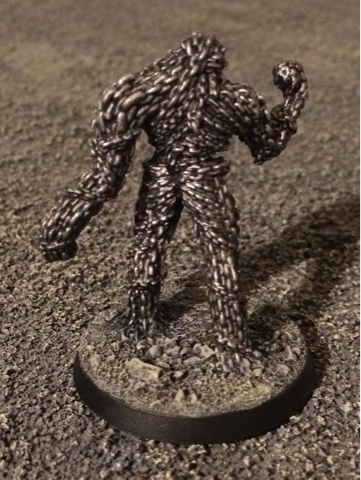 I am also super amused at his rear - I imagine there was a meeting at some point with an Art Director who was adamant that no matter what, despite the fact that it's a whacking great vaguely humanoid figure made of chains, it was of the utmost importance that the sculpt have defined buttocks.
Finishing him takes the new Tally to:
1 vs 0 = +1
Wooooooo!
Hopefully I can keep it in the black a little while this year (which shouldn't be too hard considering I am broke as a joke), although Salute is normally where it takes a little bump... Also, I'm stuck in a bit of a loop currently - I want to paint some Rebels for the Star Wars project, to do which I need some bases. If I order some bases though, I'll order some figures too (because... Well, it would feel like a waste of an order of not) which would take me into the red. Hmm, need to work on that buffer some more (he says, studiously avoiding looking directly at the scores of half-painted miniatures tucked away in various drawers...)
Posted by myincubliss at 12:11 3 comments: