aka Uncle Johnny fights the tally... 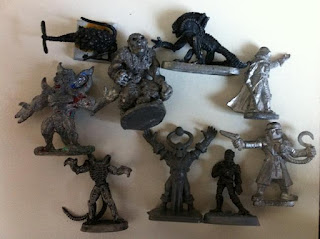 An old rust monster (because I loves them. Also owlbears. And Myconids.); some Aliens (from Leading edge); a WEG Darth Vader (because we love the Wars) some zombie ogre looking chap (because a while back I mentioned that I was looking to make some sort of ogre unit filler for my eventual Zombieslayer project); a Warzone chap of some sort (because John gave me several baggies of them a while ago); an awesome mummy that I'd been after for a while (is it an old citadel one?); the chap from Heroquest that always gets painted up like skeletor; and a mystery monster because I like 'weird' miniatures: 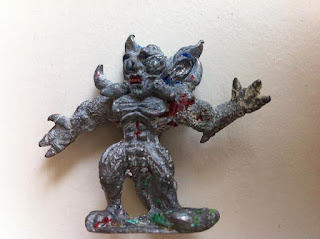 Anyone have any ideas what he is or who made him?

This little care package takes the tally to:

In other news, I still have as of yet to make any progress on my Path to Glory warband, mostly because I've not yet been able to unpack my tools (I did open the box with my WIP conversions in, thinking I'd packed the basics in there, but it turns out I was too organised and actually packed all my tools away...)

[Brief diversion]: The one good thing about moving? Getting to read all the odd comments and comics that I'd previously written on various boxes whilst sick of packing: 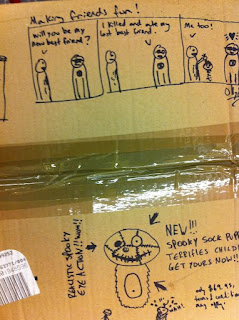 They're like a gift from past me to future me (who is now present me). 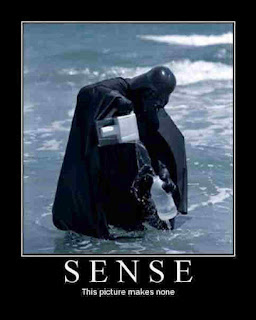 (a picture as non-sequitur as that last sentence...)

However, Rob did drop in some Chaos Warrior heads for my planned Marauder conversions though, so as soon as I've got access to knives and glue again we're good to go! 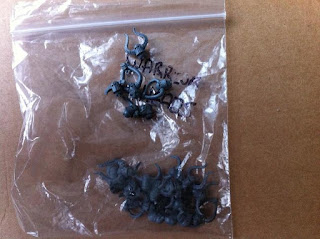 Speaking of conversions, I'm sure I mentioned a while ago that I couldn't find any pictures of a couple of old chaos spawn conversions that I was thinking about recreating... Turns out that whilst they are not anywhere on the internet (well, they probably are, but nowhere I could find them), they were in fact in an old White Dwarf in Uncle Johnny's library: 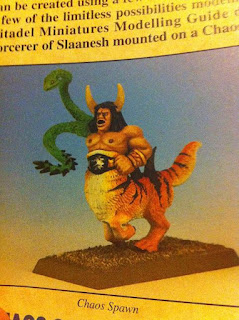 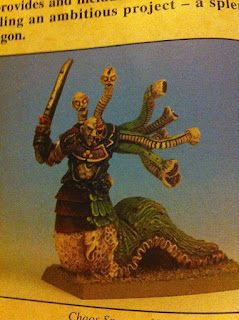 Slug body Spawn! As it's a Nurgle warband I'm making, I think this is the one I will use for inspiration. Unfortunately, this is the conversion that isn't included in the article, so if anyone has a copy of the 'Citadel Miniatures Modelling Guide' you could make me very happy...
Also, if anyone has the beast of nurgle that the slug body is from that you don't want anymore, let me know...
Posted by myincubliss at 23:57 No comments:

...post-move, post-Reading Festival, and post-birthday (not in that order). Nicole went all-out this year, and amongst the piles of other presents was an order confirmation for some Games Workshop goodies that I got to pick up yesterday: 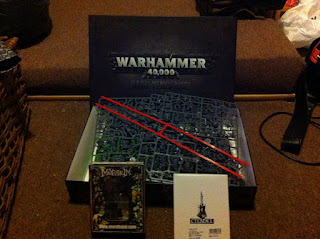 Dark Vengeance (cultists woo!), as well as the Mordheim Frenzied Mob and an Undead warband, both of which made their way onto my birthday list as part of the long planned Zombieslayer project. Speaking of the birthday list, I emailed some bits and bobs to Nicole, including the 1989 Nurgle Champion with Halberd that I'm currently after, which a GW employee apparently claimed could be ordered... alas, he was wrong. Does anyone have one? I tried over on the LAF, but so far all quiet... This chap:

So, piles of miniatures: good for making me happy, not so good for the tally:

Post-move, we're partially unpacked, but all my toys are still locked away in their boxes, so no positive swings to the tally just yet. Path to Glory remains a priority though (as long as I don't get distracted by the shiny new push-fit Dark Vengeance plastics), with the Marauders at the top of the list.

Speaking of the move, whilst on a jolly up to Ikea to buy furniture (yes, and stock up on cork), we nipped into Bluewater where I was able to snap a couple of pics of the Ork Baneblade painted by John of John's Toy Soldiers: 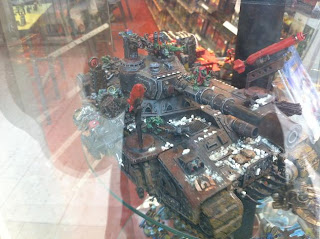 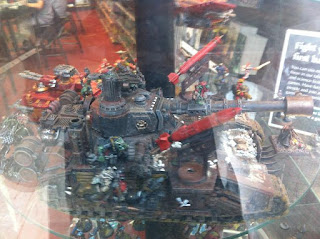 Gorgeously modelled and painted, and worth having a nose at if you find yourself in the area!
Posted by myincubliss at 00:15 2 comments: