Stick them with the pointy end...

(I'm going to regret having used this blog post title already if I ever get round to making an Arya Stark, but everything else I thought of was absolutely terrible...)

Well, onto the point of this post - I finished this beauty this week: 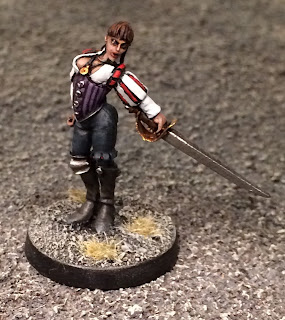 A promo resin from Westfalia Miniatures. When I got her last Salute, I vowed to myself that I would get her painted up straight away, rather than taking most of a year like the previous one, but here we are having taken a fortnight longer than that. I started off strong, getting her based and undercoated, and painted her skin, then stalled. Fast forward several months of me looking at her in my painting queue sadly, telling myself I couldn't do her beautiful sculpt justice.

But then, Salute loomed on the horizon, and I found myself gazing into the painting queue once more after finishing the garages and plucked out a few half-finished gems that caught my eye and managed to get her finished up in less than a week. 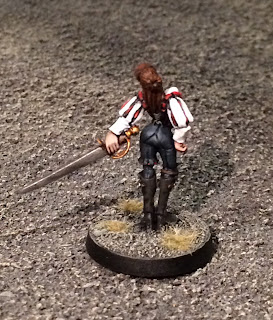 She's got a real Anna Henrietta from The Witcher vibe to her that I really enjoy: 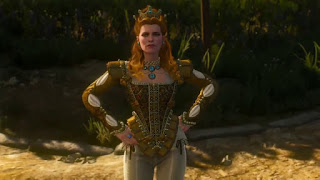 I still think that my painting skills aren't up to the job of really doing justice to this sculpt, but it was such a pleasure to paint that I'm glad I plunged ahead!

My wife has recently ordered herself a mini photo booth to take pictures for her business, so even if the painting doesn't get any better, the photography may well do soon...

She isn't the only movement on the Tally though, as my Necromunda pre-order arrived: 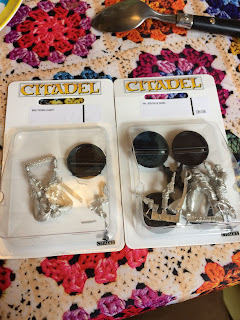 Mad Donna and Kal Jericho, that I've coveted for years, and so jumped at the chance when they were made available again, despite my vow to save all my pennies for Salute.

In other news, whilst digging through my collection of half-finished projects I pulled out my Sisters of Battle miniatures and thought that I should probably get around to finishing them, and the next day they announced that they were coming back in plastic, so I may in fact be magic.

In other other news, I've listed some spare bits and bobs on eBay to make some Salute spending money, so if you want to buy some you can do so here to further perpetuate the cycle of me acquiring toys.
Posted by myincubliss at 22:34 2 comments:

Meet me round the back of the garages...

Attention-grabbing image to lure in that ever-dwindling blog readership from whatever dashboard they use to consume such things: 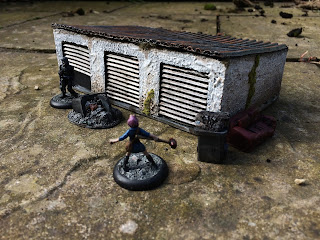 So, as mentioned last post, I've managed to get the rough framework of a set of zombie rules that I've had bouncing around in my head for a few years down on paper, which got me to thinking - what's a piece of terrain that it makes sense for survivors to be able to scavenge in? You have to suspend your disbelief somewhat when your survivor finds a bundle of supplies and weapons in a comic shop, but a set of grotty storage garages (you know the kind, you used to smoke behind them as a wayward teen) make much more sense...

So, like all good model-makers, I started out with a rough plan, that was part scale drawing, part mood board: 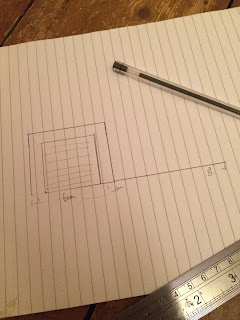 I decided to make a run of three connected garages, figuring that it would make a nicely sized piece of terrain without taking up too much space, and decided to give it a sloped roof to make it look less like a plain box. Then, out came my trusty cork sheet, and after some careful measuring I had all four sides of my garages: 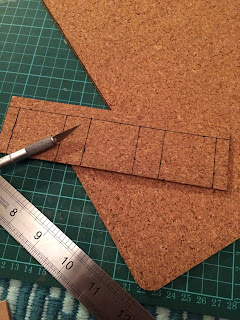 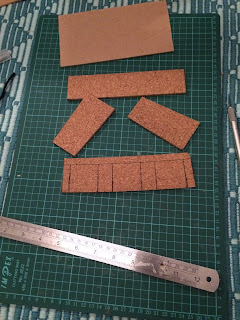 I then cut out the doors, so that I could install tiny scale roller shutters made of corrugated card: 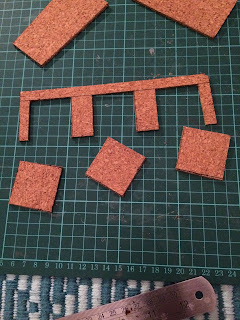 Although I'd originally planned on attaching each 'door' separately, I decided that a piece of card attached along the length of the wall would give a good base for attaching the corrugated card to, as well as providing some additional support to the wall itself. In hindsight, it would perhaps have been better to attach it before cutting out the gaps, as the spars of cork seemed to want to bend away when I was attaching them, but with some careful nudging everything was flush and square again, and being pressed flat under the nearest thing my wife could pass me as both of my hands were occupied nudging things back into position: 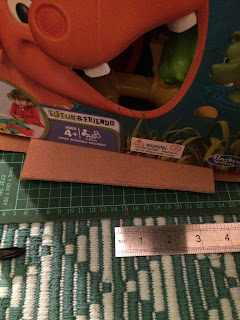 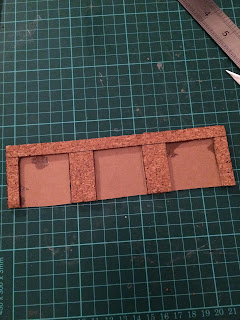 To make the doors, I simply used the cut out pieces as a template to cut corrugated card scavenged from takeaway coffee cup sleeves (which I was able to find surprisingly few of in my store of supplies, despite the fact that it feels like I've been hoarding them for years for just such an occasion as this): 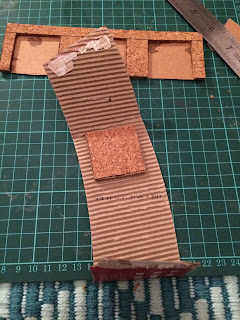 And then into the gaps they went: 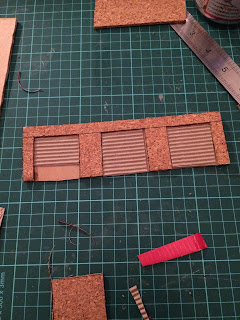 Then it was just a case of putting the box together - using some of the offcut pieces of cork from making the doors, I cut them in half, then half again, and then halved them corner to corner to make some 90 degree corner supports: 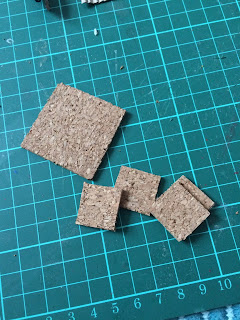 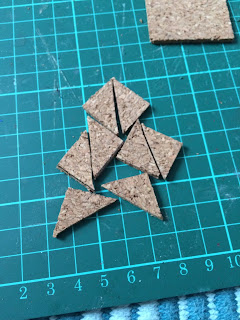 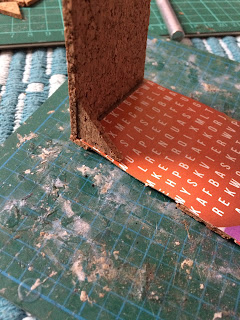 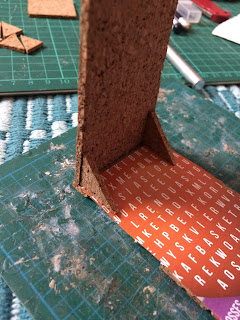 I also glued a few together to make some supports to help keep the walls straight (as cork can get a little bit bendy if the piece is too long): 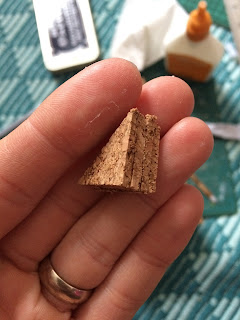 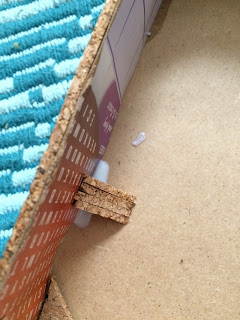 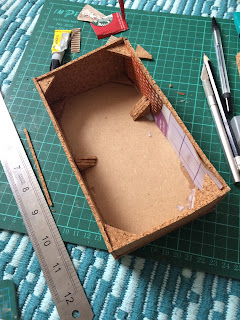 I felt that it could do with something a little extra at this point, so decided to stipple some filler over the walls to give a little bit of texture and disguise the joins: 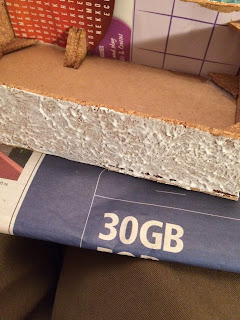 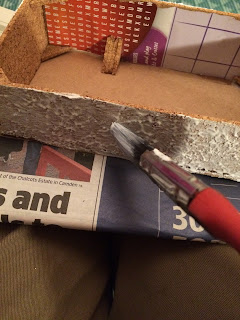 Then comes the roof - despite being aware of the valuable advice 'measure twice, cut once' I somehow managed to place the cut in the corrugated card I was using one rib too short, resulting in this: 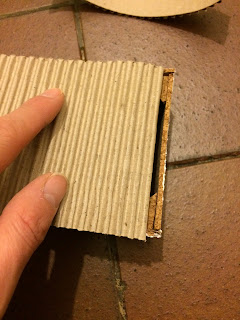 In my defence, I measured twice, here's the mark in the right place, it just seems that in turning the piece over twice whilst deciding whether it would be better to cut it from one side or the other I seemed to slip a rib over... 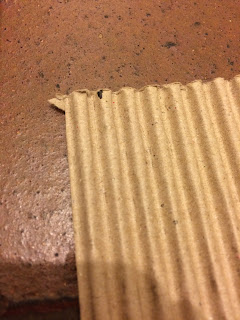 Cue measuring and cutting a whole new roof piece, with the old one getting thrown into the scraps box for recycling in another project...

I briefly considered making the roof be a drop in piece, and attached the corrugated card to a thin card base, but when it started to warp (the corrugated card comes as a roll, and the thin card wasn't too happy at being glued) I decided to make it a sealed piece, and so glued it on and left it to press under, again, whatever was within arms reach - in this case, a fuzzy felt book, a Walking Dead scenery booster from Mantic, and some sort of rock salt candle holder, to create a pile that was heavy enough to keep the roof flattened, but not so heavy that it would crush the whole construction! 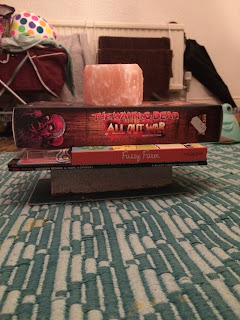 After a couple of days, I got bored of waiting for the snow to go away, so spray undercoated like this: 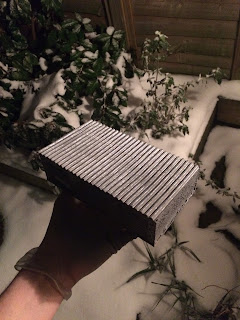 It was very cold. The snow melted the next day.

I borrowed some white acrylic from my daughter's art supplies to put a rough basecoat on the walls - it did not cover very well, but given that I was aiming for a pretty grotty, semi-abandoned look, I was pretty happy with that: 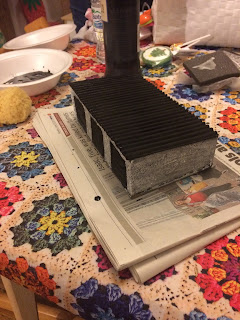 Well, until I applied a dirty wash around the bottom and flecks of white paint started coming off on my brush, but I was able to cover that up with some careful mud stippling.

Plenty of drybrushing and careful application of spot washes later, the roof got some very rusty weathering, and I applied some flock growth and a little static grass growing out from under the roof to make them look a little unloved, and voila, done! 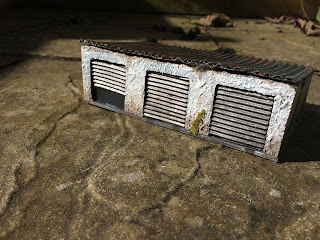 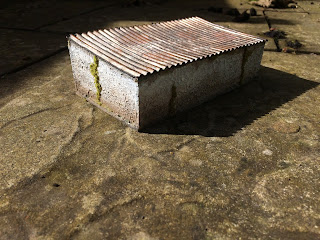 (I nipped home at lunchtime during the week to take these pictures in the garden with natural light).

I don't know what I'm going to do next - I've been weirdly unmotivated to paint miniatures recently, although with Salute looming ever closer I should probably try and build a little more of a buffer into the Tally...
Posted by myincubliss at 07:30 6 comments: