So, rather than cracking on and starting to paint my converted spartans in fetching shades of red and blue, I thought I should probably convert some more to make enough for a four-player game. I'll use Master Chief for one player, but that meant I still needed seven more minis...

To start with, pistols: 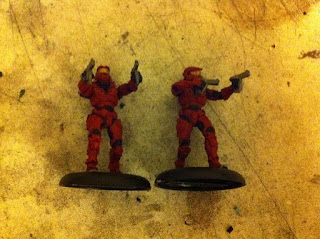 I had to convert two, since there isn't already a Master Chief fig with a pair of pistols (although I'll use the Master Chief I'd previously converted for him, as that way it's only the M.C. figs that are stood on various large chunks of scenery...)

Whilst converting these I had a sudden thought: what if, rather than cutting through arms, wrists etc to convert them, I just wrenched the whole arm out? Turns out they're held in place with a handy Tetris-piece shaped plug (which you can sort of see here): 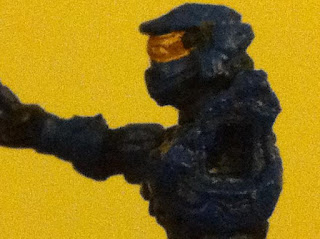 Which you'd think would make arm swapping fairly straightforward, no? Turns out they're positioned somewhat differently in different figures, resulting in the following: 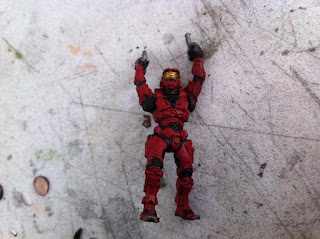 All hail surrender Spartan! He amused me briefly, but a little bit of cutting, some liquid green stuff and a dab of superglue later, and he became the Spartan you saw in the first picture.

I won't bore you with individual shots of each of the other five: 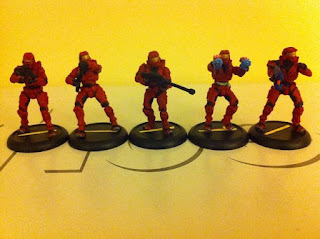 From L-R:
Battle Rifle (that was originally going to be on the sniper model, but I just couldn't get the Sniper Rifle to sit right so they got swapped);
Shotgun (using a Brute Shot body so it looks like he's rocking back in response to some suddenly appearing threat);
Sniper Rifle (I think this one's the body of a carbine wielder on a random pair of legs from my halo bits box);
Needlers (legs from the leaping carbine figure, looks a bit like he's doing ballet though...);
Plasma Rifle (I used the energy sword body with an arm swap and some hot water repositioning to make it look like the rifle had just overheated and burned his fingers, because that's how I imagine it happening whenever I play the Xbox game...)

So with these done, that brings us to two dozen: 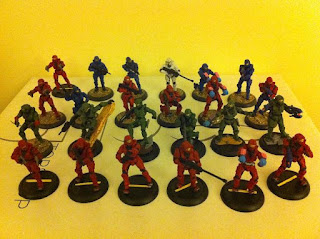 Bammo, I'll base the rest once this post is up and then they'll be ready for undercoating (which probably won't be until the weekend).

Before all of this happened though, I decided to base the discworld miniatures I had on the cobblestone bases I'd made: 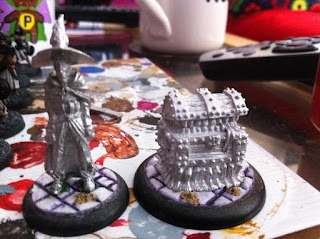 I added a few patches of rough sand to mucky it up a little and voila, done! Well, not entirely. Note the green stuff under Rincewind's boots, where I made an epic fuck-up. After spending so much time coating those bases with PVA to protect them from the harshness of aerosoals and chemicals, in a moment of unthinking ridiculousness I pinned Rincewind to his base. Yep, I drilled through the protective coating into the poor, defenseless foam and poured in superglue. It promptly started dissolving, prompting a bout of swearing and and a rush to pour enough green stuff into the recently created holes to try and plug them up... I think I'm going to brush undercoat the bases before I spray them though, just in case anything else goes wrong...
Posted by myincubliss at 22:42 2 comments:

Last night, I got some more painting done, and was determined that today I'd finish some miniatures.

When I woke up this morning though, I fancied something a bit different. I bought some Discworld miniatures a couple weeks back (Rincewind and the Luggage), and thought I'd make some cobble base inserts for them.

To start with, I gathered my materials: 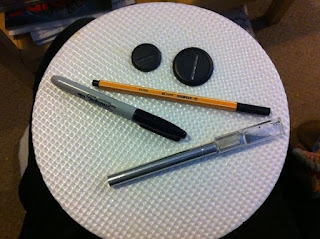 A foam pizza tray, and a variety of cutting and drawing implements (not pictures is sandpaper and a pair of tweezers, which I didn't realise I'd need at this point).

Using a sharpie, I coloured in the lip of each base, and pressed it against the pizza tray: 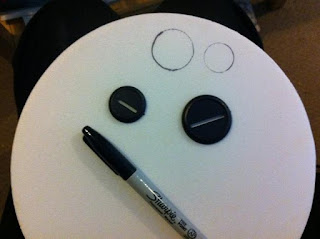 Which I then cut off as a smaller piece, so I wouldn't look like an escaped lunatic when I went outside with it (more on this later): 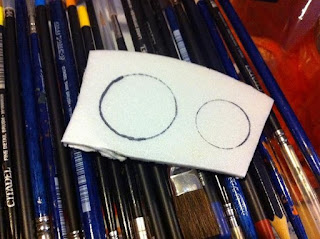 Then comes the fun part - the stomping, to give it a nice stony texture (hopefully the animated gif works, if not, imagine me stomping):

[Edit: apparently if you click on it it opens in a new window and works...]

This didn't give as much texture as I wanted, so I pressed it up against a variety of bricks and gave it a brisk rub on the back to pick up even more texture. At which point one of my neighbours came out to take his rubbish out, to find me furiously rubbing on a bit of foam pressed against the wall, which my young lady thought was hilarious...

Totally worth it though, as my foam was now nice and stony: 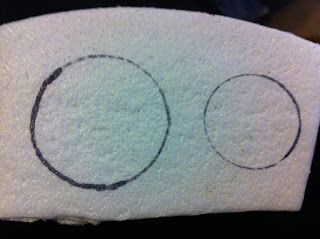 And we're ready to move onto the next step. To make it easier to work with, I cut each circle out at this point: 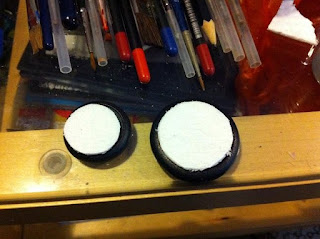 and then tidied them up with some gentle sanding. Then comes the scribing. Using a Doctor Who pen (that has a floating Dalek in it) and a metal ruler, I scribed in the first set of parallel lines: 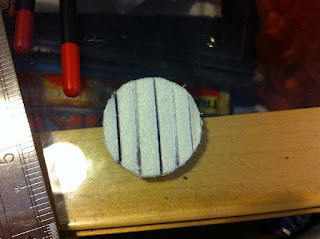 Then freehanded in the connecting lines to give it a nice, uneven cobble pattern: 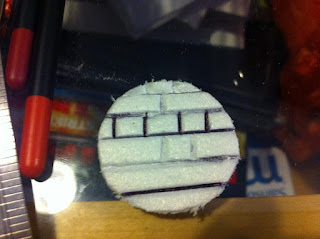 Once I'd finished all the penwork, I went back over it with the point of a pair of tweezers to make sure all the lines were scribed deeply enough, and then added a few cracks and gouges to some of the bricks. Once that was all done, they get glued into the bases: 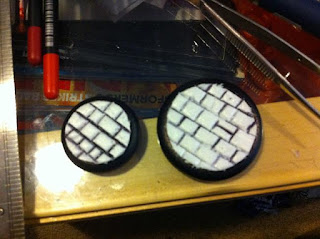 They'll get coated in a layer of thinned PVA to toughen them up (and so they survive a spray undercoat), and then once the miniatures are on, I'll add a little sand to grubby them up a bit. But until then, they're done!
Posted by myincubliss at 14:53 3 comments:

Email ThisBlogThis!Share to TwitterShare to FacebookShare to Pinterest
Labels: discworld, step by step

Sand quest and the price of Plastruct...

So, my ongoing quest to get some more of the sand that I use for basing my miniatures continues. To cut a long story short, I was running out, so emailed the guy I got the last batch from to order some more. After various setbacks, sand eventually turns up, but is much finer than the previous batch (it's like curly-wurlies, I'm sure they were bigger when I was younger...) - like, so fine that if you get it into contact with glue it will just dissolve. I send some emails, wait a week, send some more emails, and wait another week, which brings us to today.

Fed up of not being able to base the halo minis I converted in previous posts, I decided to head into town, since our local art shop stocks some model railway supplies. On arriving though, there's plenty of coloured flocks and whatnot, but no sand. They have, however, started stocking Games Workshop stuff, even though there's a GW not five minutes down the road... Swallowing my pride, I bought some overpriced GW sand. It's a little finer than what I usually use, but it should be workable. Admittedly, this is the much abridged version of events, as I spent a ridiculous amount of time wandering around the shop (it seems they don't stock milliput any more, despite my looking on every shelf, sometimes twice), and even when I found the GW stand, the sand was hiding behind some snow flock, so I almost didn't find it... 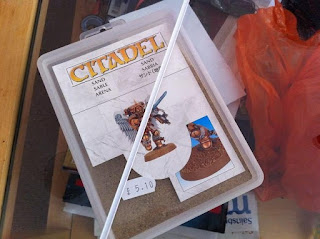 Whilst wandering around, I had a browse of their Plastruct products - there's a nice selection of I-beams and whatnot that look like they'd be useful for basing, and prettying up areas of urban rubble. Unfortunately, nothing was priced, and I ended up paying £1.38 for 15" of 1/16" tiny plastic girder... Ah well, live and learn I guess, but it is kinda cool...
Posted by myincubliss at 15:05 4 comments:

No, not a toy for small children, but the result of my first attempt at using Instant Mold: 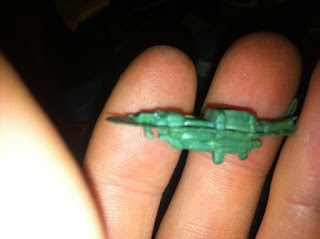 It still needs a bit of cleaning up, but it's come out quite nice- if anything, the fiddly underneath bit needs less cleaning up and fixing than the fairly plain top...
Posted by myincubliss at 18:08 2 comments:

A winner is me! And also, instant mold and SPNKRs

Yeah, I used to play KOL, sometimes I lapse back into their syntax...

Back to the point at hand, Chris over at Sippin' On Paint Water ran a little competiton, to guess what the next thing he'd be casting would be. I guessed right, and Chris very kindly sent me some goodies: 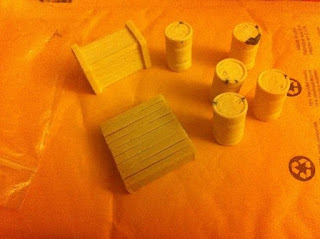 A lovely little selection of crates, boxes, and the prize-winning pallet. I've been thinking about making some urban barricades for a little while now, and these will be perfect for that.

Onto the second part of the title, my Instant Mold came! 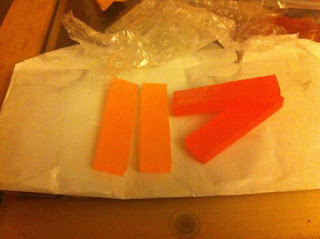 I'll save you the advertising spiel, which I'm sure you've heard before, but for the less geeky followers of the blog, the premise is this: you can heat it up and mash it round an object to make a mould of it. So, having only a single SPNKR rocket launcher for the Halo project, I thought I'd have a crack at making some more. I grabbed two glasses of water (one boiling, one chilled): 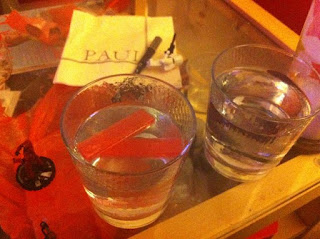 And then squeezed it round the SPNKR I'd liberated from an clix figure: 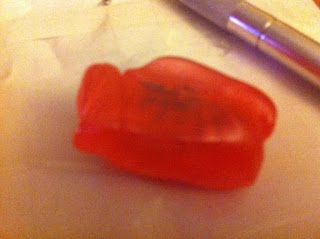 Technically at this point I dunked it in the cold water to harden it, but then when I tried to cut it open it went tits-up, so I started again. We'll pretend that everything went right the first time though, and jump to hardening the mould in cold water (I cut the excess off this time, to make it easier to cut into): 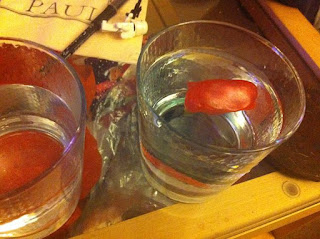 I then ever so carefully cut around the lump to free the original mode, stuffed it with green stuff (a little at a time, to make sure it got into all the nooks and crannies) and then squeezed the bejeesus out of it. As I couldn't find any elastic bands, I had to turn to hair bands to provide some continued pressure: 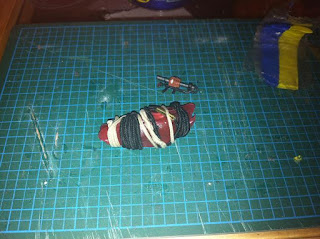 I swear, there's a mould in there somewhere. So, fingers crossed when I open it again there will be a useable 28mm scale rocket launcher in there. We shall see.
Posted by myincubliss at 22:07 3 comments:

I'm not doing what I should...

So, productivity has dried up to almost nothing- a little daubing here and there on some generic fantasy miniatures, but that's it. Still no resolution to my lack of basing sand problem either, so I've not been able to start work on painting the converted Halo miniatures either. Boo.

Even a brief stint in the creative doldrums can't stop the inevitable march of the post-man: 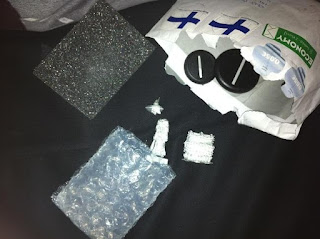 Rincewind and the Luggage, from a nice man in Finland via the Lead Adventure Forum. No great plan for these, just that someone was selling them and I thought I'd enjoy painting them (Although I need to make some cobblestone base inserts - hopefully my Instant Mold arrives soon).

Inevitably, that means the tally slides a little further away from zero:

In other news, my eye has been wandering again, and it seems to keep landing on VBCW. Militia bundling around 1938 Canterbury, what's not to love? Macfarlane are releasing a whole range of dinky Halo figures and miniatures, how do I reject that?! Also, I'm off to Wales for the weekend for the SFX weekender, where I will likely see many many things to distract me from the bajillion projects I've already got on the go...
Posted by myincubliss at 23:47 1 comment: