As tends to happen in the New Year, I thought I'd turn over a new leaf, tidy off my workspace and make a fresh start: 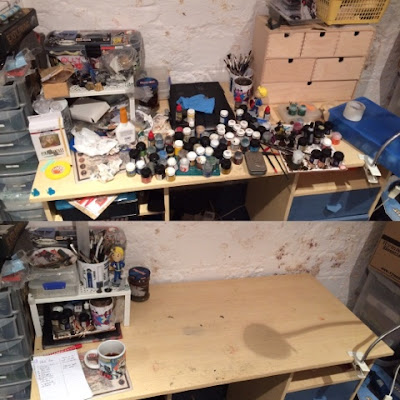 Pow! Space for projects! I was due to inherit my wife's old cutting mat when I got around to clearing my desk off, but it seems to have disappeared into the ether when we moved...

Having finished the first painted miniature of the year, I thought I'd celebrate my new found desk space by using it all to make some terrain using some of the interestingly shaped pieces of party food packaging I'd being furtively stashing over the festive period: 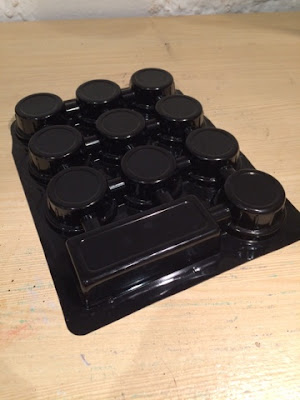 This excitingly shaped piece of vacuum-formed plastic originally housed a number of individual portions of lobster mac and cheese (also highly recommended), so I gave it a wash, trimmed the edges off, and then cut it a base from the 2mm ply that I found a few months back, bevelling the edges with a Stanley knife as is the convention: 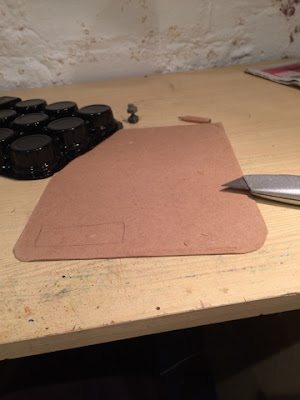 I filled the hollow recess with scrunched up newspaper, figuring that I could douse it with diluted PVA to make a papier mache esque filling to give it a little additional support: 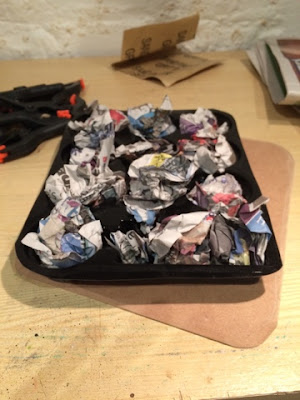 Here it is again, with additional glue: 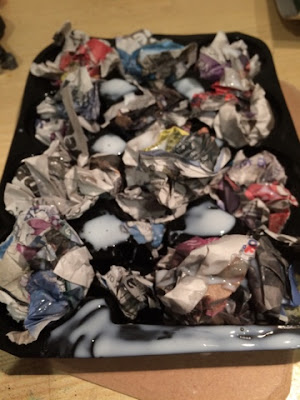 And then, all of the clamps: 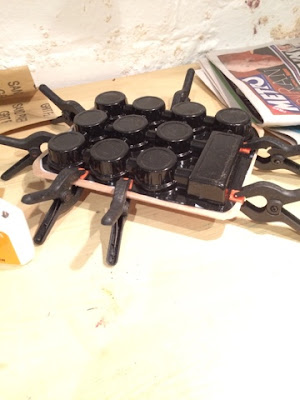 If anything, I could do with more clamps; however after a day of drying, I came back and applied some more glue and re-clamped any bits of the plastic packaging that weren't glued down properly. 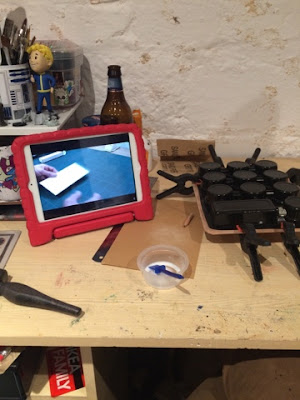 I also applied glue and sand to the interior voids on the piece, with the intention that the finished piece would look like a number of submerged tanks jutting out of the ground. 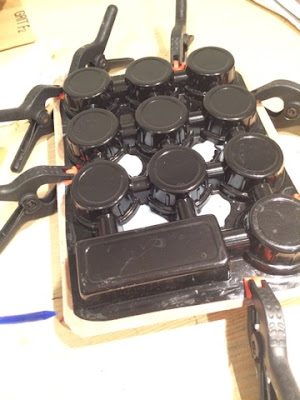 I also dug out this little bit, that I thought would fit nicely with a Star Wars / Fallout vibe for the piece: 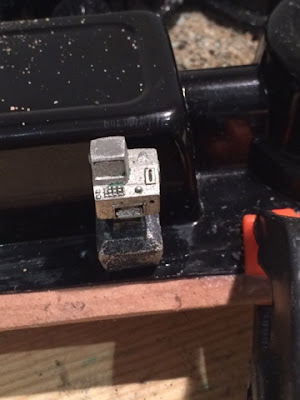 I'm not sure who made it, I think it came as part of a job lot with some Future Wars figures and some robots with 'Denizen' on the bottom of their integral bases...

It was at this point that, overeager and enthused with the progree that I had made thus far, I skipped a step. Rather than smoothing out any rough edges and better blending the plastic base into the wooden one with filler, I jumped straight into sanding the base (what can I say, I had the glue out already and got carried away...) 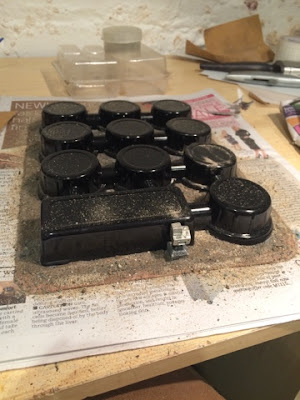 Obvious in hindsight, but not too bad it turns out - I was able to go back over any rough spots the day after with more glue and sand to break up the outline of the plasic base where it was still visible. Not as perfect a finish as smoothing the groundwork out with filler, but better than having to scrape all of the basing material off and start again!

Next came some detailing work to make it look less like featureless plastic - I had a couple of ideas for this (one of which involved prying the interior piece out of a number of Heroclix bases to make 'lids') but after a quick straw poll over on Instagram I went with this: 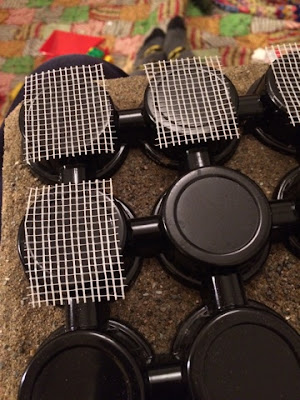 I think it's some sort of mesh tape used to plaster over - whatever it might be, I found it in a pile of rubbish at work so the price was right! 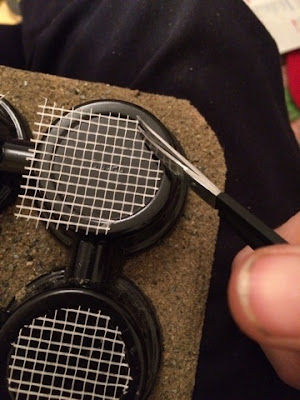 Yes, I did spend an entire evening carefully trimming pieces into shape with some fancy Champneys nail scissors.. 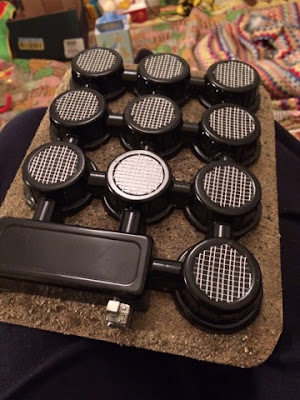 A little bit of diamond tread patter plasticard from my stash adds a little detail to the remaining flat space, making an observation platform: 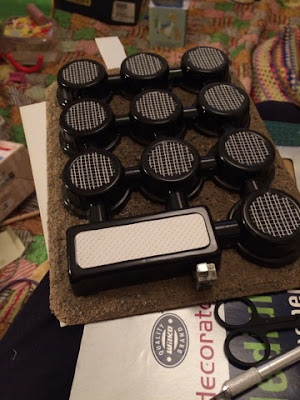 Apparently I then missed a few steps (and weeks) taking pictures, but I went on to paint it. Painting was a little bit fraught, as for the first part, I didn't feel like I was making much headway and started to feel a bit less motivated to finish it, coupled with dropping the piece, which due to its thin plastic nature shed paint like no ones business (which explains the level of battle damage in the finished piece I added to hide it!).
Lots and lots of metal bars to pick out do not make for a satisfying painting experience, although sponge weathering is always quite pleasing! Once the dirty wash went on though, it started coming together in my eyes: 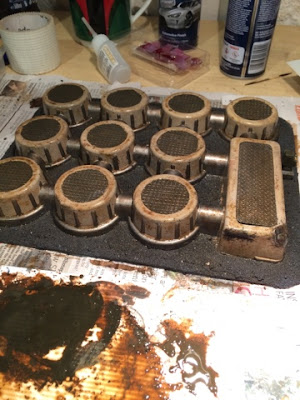 After finishing the basing, I wasn't sure whether to call it done, or go and add some additional paintwork. I decided to leave it a day or two (which turned into a week, and involved me getting distracted and starting another project, which I then got distracted from and started a third piece, but hopefully they will have posts of their own soon enough) before coming back to it with fresh eyes. When I did, I went back and added some extra dirty wash to a few places where it had dried a little thinner than unwanted, and then went over the whole piece adding streaks and splashes of Typhus Corrosion and then called it done: 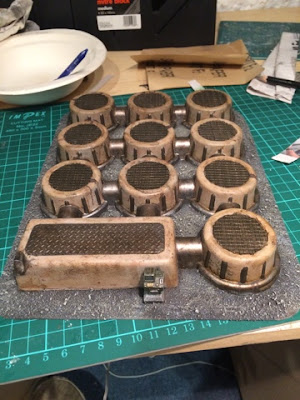 (You might notice that this post has been so long in the making that I've actually now inherited the cutting mat mentioned at the start of the post!)

Here's a close-up win a Fallout miniature for scale: 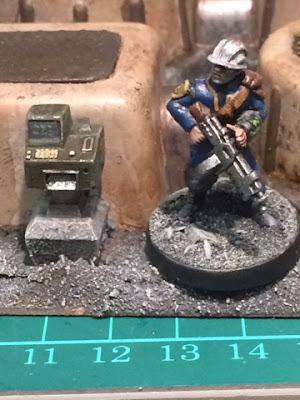 And a couple of close-ups of some of the Typhus Corrosion streaks: 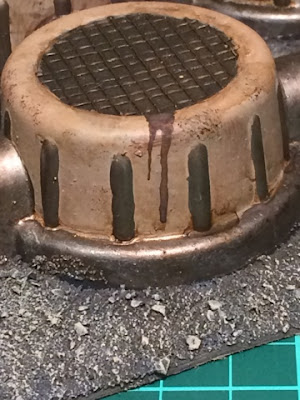 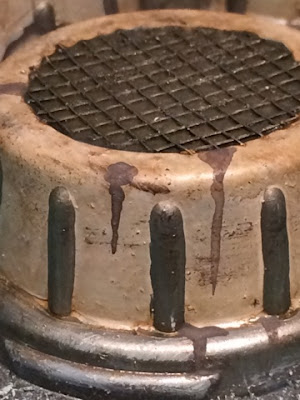 Pow, challenge complete! It should work as a water or fuel tank site for anything from Fallout to Star Wars, or even for modern zombie games with a few fences around it maybe! 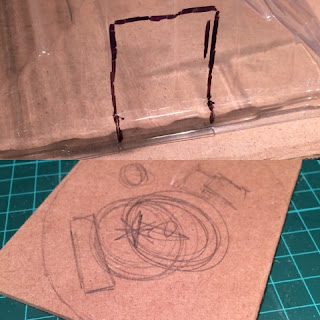