I think the first person to ever drybrush a mini was painting something rather like these: 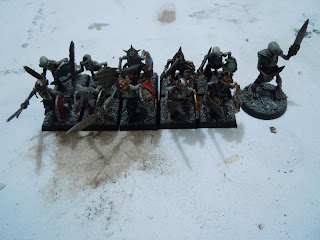 (slight diversion - my, what an awkwardly angled shot. But I've already put the skellies away, so it will have to do for now. Also, I need to start using some proper art software on my pictures. And get a lightbox. Sigh...)

Skeletons! More generic fantasy for the generic dnd project! The bone was an absolute bore to paint, especially when bits that looked like part of a flowing robe turned out to actually be bits of bone I'd missed previously, requiring going back and touching up...

I quite like the gw skeletons though, replete as they are with the ubiquitous coffin lid shield: 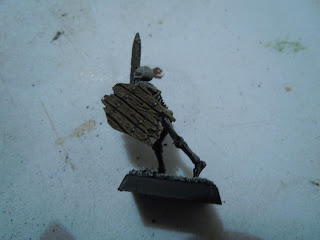 I stuck with the regular square bases with these, even though most of my generic fantasy is based on 25mm rounds, just in case at some point in the future I ever decide to start an undead army for Warhammer. However, I built them with absolutely no thought put into whether they'd rank up or not, and painted them with a rather cavalier approach to colour scheme, so there's probably little fear of that ever happening.

There's even a terrible conversion in there too! 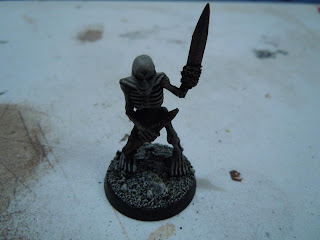 Proxy Boneshard Skeleton! It's close enough for my liking, although I wish I'd known beforehand that dousing string in superglue makes it go all weird and fuzzy...

And thus, we get to have a vanity shot of the skeletons menacing a poor wizard: 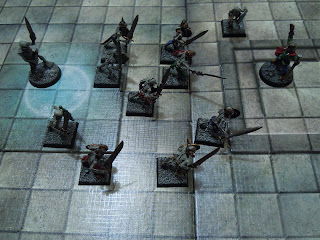 Which brings us to:

Well, I'm back under minus one hundred, which is something I guess... (less impressive when you consider the parcel that was posted my way today...)
Posted by myincubliss at 22:05 No comments:

Lord of the Rings, in this case: 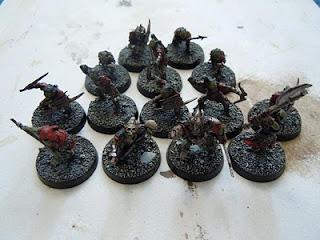 A whole load of lovely little gobbos for the pie in the sky 'maybe one day I'll play dnd' project. I quite like the LOTR goblins, they're menacing little buggers, and there's some quite characterful metal models too - 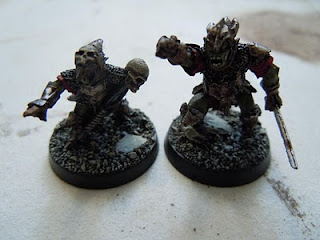 Magic goblins (yep, including a conversion! It's not that I snapped his spearhead off in the stripping pot, it's intentional, look at the pic in the Monster Manual! Happy coincidence?), Fat goblins; 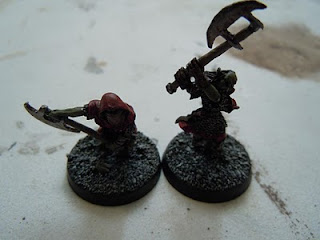 Even ninja goblins with whacking great axes. I know, my photos are worse than usual today, I blame illness (but just wait, there's more pictures to come!)

When I decided to paint these, I thought it'd be the perfect time to crack out my old, unused-in-an-almost-unreasonably-long-amount-of-time pot of Catachan Green. Wrenching the lid off, I found it had dried up completely.
'Hmm...' thinks I, 'I'm sure I bought a replacement pot...'
Much searching later, another pot is found, lid popped, and it turns out that one is even deader than the first (which was, in fact, the replacement pot). The good thing about model paint though, is that generally if you find yourself in this situation, you can fix it using only two simple, readily available ingredients from around the house.

1 - Water
(from the tap, or of the fancy bottled variety if you prefer - may depend on whether you're in a hard water area, like most anywhere)

2 - A Stick
(these literally grow on trees, although I made mine by whittling down a tongue depressor that I found on my desk. Well, whittling might be something of an over-exaggeration...) 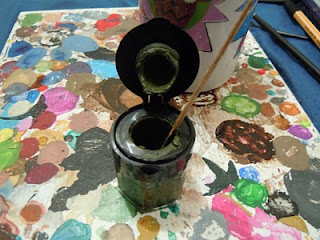 Much stirring and grumbling about the price of paint later, and voila, good as new! Well, not quite good as new, but spreadable enough to use as a basecoat at least...

Whilst on a roll from actually finishing miniatures, I also managed to slap some paint on a couple more: 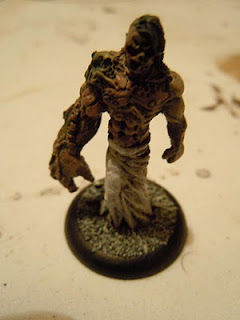 A Blasphemous Construct for Strange Aeons (I love his doofy face), that I could not seem to get a good picture of (maybe he's shy, or has self-body-image issues). All that time spent glazing washes onto his freaky-deaky arm, and you can barely tell. Hohum...

Lastly is this chap: 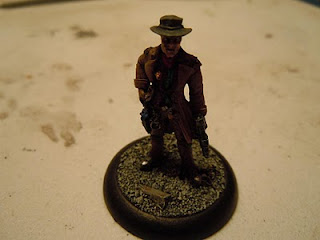 a rather spiffing looking Space Sheriff type (originally from Rezolution DT) who'll fit in quite nicely for Firefly. Talking of Firefly, this doubles the output completed so far for that project - that's a leap of 100%. Now, I may not be a Golden Demon standard painter, but when you break it down you can't argue with straightforward maths like that. 100% increase. That sounds like an incredible amount. Win.

Although I couldn't get a decent straightforward shot of him, I did end up capturing this in frustration: 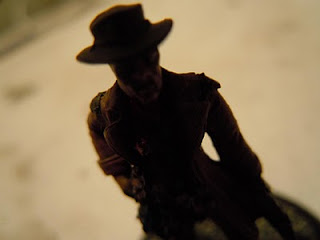 As he looms out of the darkness, drawling 'Stop Space Police! You're nicked!' (to mix several genres...)

Which brings us to:

Well, I've already painted more miniature this month than I did last month and we're only a couple of days in, but that big box of miniatures is really going to be quite the hump to get over to get back into the positives... (at this rate it'll be what, November?)
Posted by myincubliss at 23:01 No comments:

It was a good price!

AKA 'how I well and truly murdered any chance of the tally being in the green again'.

Although it didn't start out too badly, with this chap arriving 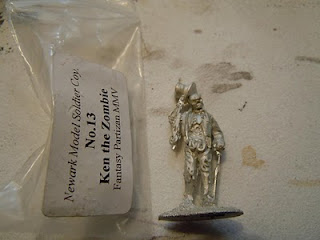 (Ken,the Partizan zombie, that I'd been after for a while), the tally became an almost insurmountable challenge with the arrival of this: 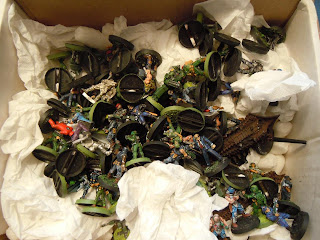 a big box of miniatures. 95 miniatures, in fact - frankly, it was a good price for the miniatures that I wanted, hopefully the rest can get traded away or sold in order to try and get the tally a little more manageable, as opposed to as it currently stands:

In other news, don't you just hate getting ill during time you've booked off from work? It feels like you should be able to claim that holiday back, since you didn't get to use it properly...

Edit - barely five minutes after posting this, the missus brings me this: 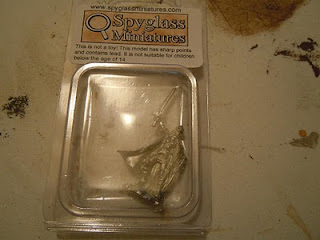 taking the tally even further into the red at