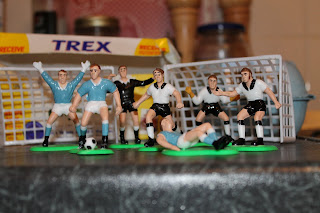 No, it's not the Blood Bowl team I mentioned I was painting, I got asked to go over the crappy paintjobs of some cake decorations to make it look like their hair actually fit their head. My favourites would probably have to be the guy I gave a swoopy side-parting to, or the chap on the right I added mutton chop sideburns to (hey, my attention span is only finite). And as tempting as it is, no, I'm not going to add them to the tally...

More importantly, it seems Games Workshop is quietly releasing a new game, which I feel obliged to buy despite not knowing anything about it since I still regret not saving my pocket money and buying Warhammer Quest when it was readily available (which explains the copy of Space Hulk still sat unused in my pile o'games). The main worry is, if I don't buy it, and they stop making it, I'll then want it. But more realistically, I'll buy it, and never use it, and still be sad that I don't have Warhammer Quest...
Posted by myincubliss at 22:52 No comments:

...his name is The Captain (see the Nextwave theme song here if you don't get the reference)

So yeah, several years after originally planning to do Nextwave in miniature, and only a couple of months after suitable Heroclix minis came out, I've actually finished painting something! 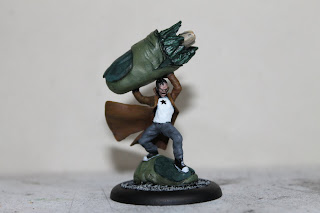 The freehand "Heartstar of the space between the galaxies" isn't perfect, but his sneakers look nice from this distance, so hey, it's a win overall I guess. I've got the rest of the Nextwave squad in the painting queue in various stages of completedness, but who knows when my fancy will swing this way again... (although, I yesterday discovered that Heroclix have made a Dirk Anger fig... but if I get that, I'll need to convert some wacky figs, like windmill-faced Samurai, apes dressed as Wolverine, and cuddly koala bears of doom...)

Finishing The Captain brings the tally to:

Only a couple to go to break a century! I wish I had better focus. Once this post goes up, I'm planning on going back to painting my 3rd edition Blood Bowl Human team. However, it's entirely likely that I'll get distracted and start painting the 11th Doctor and Amy Pond, a not-Ash (of Evil Dead fame), or even Judge Dredd.

But don't quote me on that, I've got a load of miniatures ready for undercoating...
Posted by myincubliss at 15:06 No comments:

Back on the horse! (Redux)

Back in the swing of things, and actually painting miniatures, who knows how long it will last?

But before we get into all that, a slight diversion - I got taken to the Doctor Who Experience by my lovely young lady for my birthday! It was awesome, but can really be summed up in two pictures: 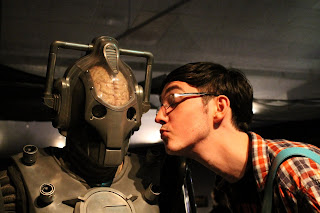 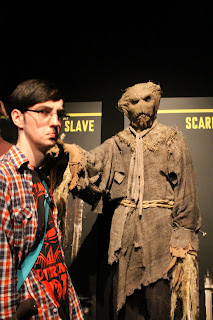 Olly loves Cybermen, but fears the scarecrow. There were many more pictures taken (although Nicole was less than impressed when I asked for front side and isometric views of every costume for painting reference...), but I think these two say it best...

Anyways, onto the miniatures (and apologies in advance for the worse than usual pictures, it's a new camera and a new light that needs a daylight bulb hampered by my measly skills): 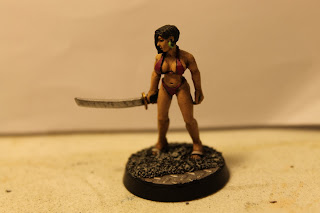 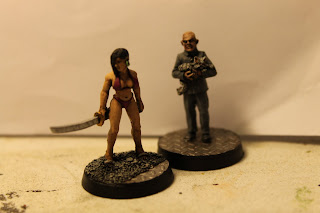 She's from Copplestone iirc, and was my first time experimenting with a Foundry triad (Oriental Flesh). I quite liked using the triad, as it made painting flesh a lot more straightforward, and might pick up some more in future (curse Foundry's long-lamented postal charges, I may have to wait until next Salute to pick up the next batch...) 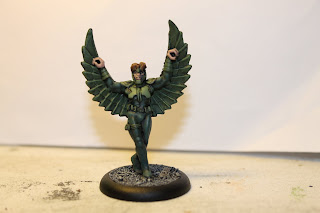 The Vulture! He's been sat in his base colours for... I don't know, a couple of years, but I finally got round to finishing him off. He's a repainted heroclix fig, with all the blurry facial detail and wacky scale that entails, but he was one of the first heroclix figs I ever got, so still holds a certain charm. With him done, I'm 66.66% of the way to having my own non-canon Sinister Six! (Although if I were to go canon, I'd probably go for the second line-up, consisting of:


as that's who I'd most fancy painting). 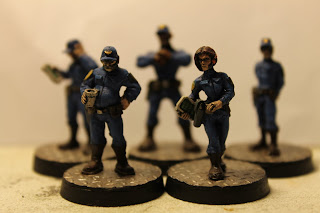 And last but not least, some goons from Heresy, for use as technician types for 7tv (yeah, they had ipads then, what of it?) and SF goons for Doctor Who. I don't know why, but I do love to see a wedding ring on a miniature.

And thus, to the tally:

Still not great, but getting better (and hey, we've almost hit a hundred finished minis!) - fingers crossed I can hold back from restarting Mass Effect (after all my xbox saves got wiped, I couldn't bring myself to start the big games again, but I'm getting a hankering...). Then again, it's only the fact that I can't seem to find my copy of Zombieslayer to re-read that's stopping me from building an old-school Undead Warhammer army (well, old-school to me at least, I'm only young); Kemmler leading blocks of zombies with zombie Wyverns, with none of this Vampire Lord malarky... Eh, it could go either way really...
Posted by myincubliss at 00:25 No comments: