In the Emperor's name get back here so that I can show you the business end of this Eviscerator heretic!

So, there's a bit of a long-winded explanation for why this guy got painted. And why it took... 8 years maybe?

One of the guys at work has recently discovered Warhammer (40K to be precise), and knowing I am a big nerd wants to play some sort of game. Me being me, I've already bounced from the idea of playing Kill Team (which I'm assuming is what used to be 40k in 40 minutes), to Shadow War Armageddon (new! Also unavailable) to Inquisimunda (because it's basically Necromunda with waaay more options). I figure I probably know a couple of adults that I could probably also rope in to some skirmish scale wargaming...

Which brings me to this figure. Fired up with my current enthusiasm for Inq28/Inquisimunda, I thought I'd finish painting a conversion that was originally built for the Witch Hunters army that was last briefly mentioned on the blog 6 years ago: 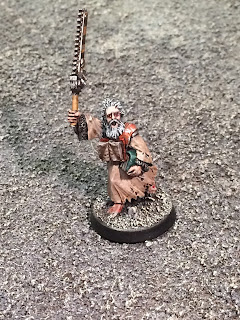 A zealot with an Eviscerator - he was built so long ago that he was the last model in a blister of Empire Flagellants that I bought along with a Mordheim Witch Hunters boxed set. Off of the shelf in a Games Workshop. That long ago.

It's a fairly straightforward weapon swap - off came his flail, and on went the blade from a space marine chainsword (as it's big enough to look like an oversized Eviscerator on a normal human, and the handle of the flail is long enough to look like a two-handed grip). I figure his awkward stance is him swinging his chainsaw like Leatherface at the end of The Texas Chainsaw Massacre in his enthusiastic religious fervor. 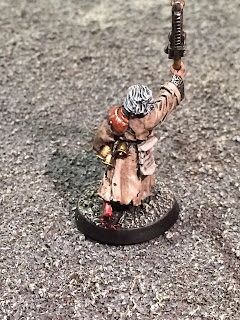 I mostly basecoated him, then many years passed until the events of the first paragraph of this post. It's a fairly interesting little sculpt - I love the string of bells hanging from his waist, but I'm not sure where I stand on the book on his chest and parchment on his side - rather than being blank for you to add your own squiggles for writing, they come with sculpted indentation detail - with careful use of dark washes I was able to pick them out so that they looked passable, but it's fairly unusual (as if you look closely you can see the indents...) 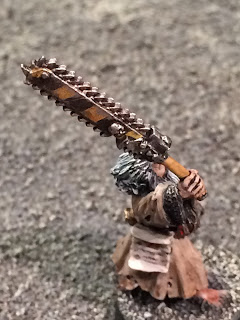 Lastly, the blade. Oh hazard stripes, thou art a pain to do evenly. Thank goodness for a soft pencil and carefully marking out where you want the stripes to start and end rather than trying to freehand it! 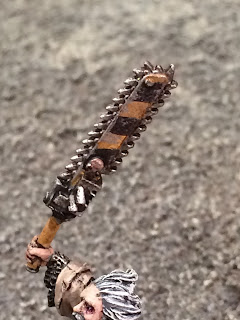 Also, a goodly amount of weathering helps add to the whole effect. I briefly considered going hog wild with blood splatter, but I'm glad I held back as I think it would have been easy to go too far and ruin it...

He was actually painted about two and a half weeks ago, but a number of factors have combined to mean it's taken me this long to get him posted - I miss the Blogger app, it's a pain having to drag out my wife's laptop to edit posts; also I've been playing a lot of Fallout 4, as I ordered the Witcher 3 and want to finish Fallout of before starting another game that will take me multiple years to complete (and yes, I'm the sort of OCD nerd that is also reading the Witcher novels before playing the game); also, I've been working on a bunch of scatter terrain pieces in the hopes of being able to play some games at some point...

So what's next? Some more Inquisimunda models, hopefully - I've a few stock models built that I'll try and get based up when I'm basing the scenery (which you may have already seen progress pics of over on Instagram), and then hopefully I can then move onto finishing some conversions that I've had in various states of half-completion for the best part of a decade - weirdly, despite my prediliction for the more Radical aspects of the Inquisition, a number of figures that I have would probably suit a more Puritan band (this Zealot, for example...)
Posted by myincubliss at 00:05 2 comments: