So, amidst converting some more Stark warriors, I thought I should probably make a start on converting a miniature of the guy that they're going to be dying in droves around: Ned Stark, Lord of Winterfell, ably portrayed in the telly series by Sean Bean (spoilers - he has the life expectancy of a character played by Sean Bean).

The base of my conversion was a Lord of the Rings Boromir miniature, as it had a tiny Sean Bean visage and  I quite liked the coat. The whacking great shield on his back had to go though, as did his somewhat cricket bat shaped sword and the horn of Gondor: 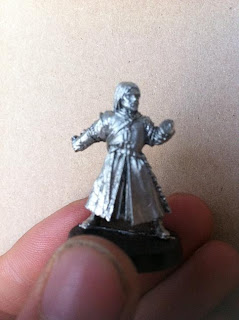 Which left me with this, Boromir looking slightly 'armless (teehee).

I read an interesting online discussion about who would win in a straight fight out of Jaime and Ned, had their duel not been interrupted, which raised the point of whether Ned would be carrying his Valyrian blade Ice while he's mooching around King's Landing. Conventional wisdom suggests no, but I reckon he would probably keep it with him at all times, for fear of losing it or needing to swiftly despatch some justice with a personal touch, so he got a new sword from a Ral Partha fighter (who is pegged to become the basis of a  Vargo Hoat conversion at some point): 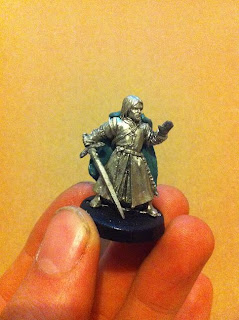 Some gentle bending was required to reposition the sword arm to get it to fit. He also got a new left hand (from the Perry Mercenaries command sprue) - in the end it came down to a choice of two hands, a clenched fist from the Gripping Beast Vikings or this one, and my other half voted for the 'Bitch Please' / 'I Need Everybody to Just Calm the Fuck Down' hand...

As I'm sure you can't fail to notice, Ned also got a new cloak, to cover the scars left from removing the shield that was originally moulded to his back: 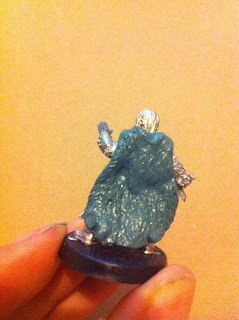 Instant Mould + Mordheim Middenheimer sprue + Greenstuff = new cloak! Truth be told, this was probably the result of the seventh or eighth attempt, as I was a little overkeen and kept trying to attach it before I'd left it to cure for long enough...

Once the cloak has finished curing overnight, I'll go back and use liquid Greenstuff to fix the slight gaps at his wrist and hand, as well as adding some detail into the indent that I made to show the cloak being affixed at his shoulders.


A while back, I mentioned to Rob that I was looking for some Warriors of Rohan to use as a basis for some Stark conversions, and he said that he might have a couple of spares knocking around. Then this week he brings me this: 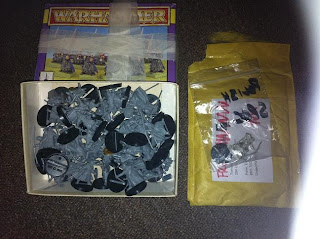 You wouldn't think it, but you can fit fifty miniatures into an old GW box it turns out... as well as half a skeleton and a Lizardman shield. Also pictured is the replacement Legolas I'd been waiting for, which takes the tally to: