A jaunt into Frostgrave

As part of the ongoing operation: play some Frostgrave, I knew I needed to make… well, some Frostgrave! These plans were expedited when down in the basement I picked up a Hirst arts ruin that a friend gave me a few years back and it broke in my hands, so I decided to rebase some parts separately to allow for more modularity. 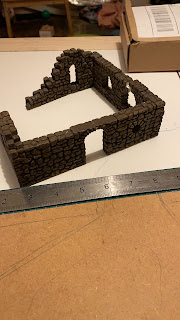 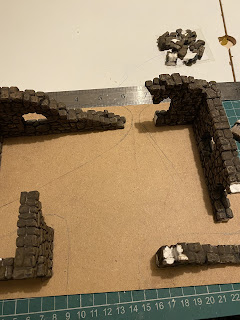 I did briefly consider basing the ruins so that the outside edge of the wall was flush against the base to allow me the option to maybe make some rubble that would sit right up against the wall, but in the end decided to base everything centrally so they’ll match the rest of my existing scenery. 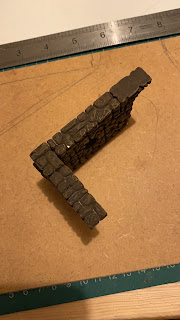 I did carefully set the bases so that if need be they can still be aligned in their original arrangement: 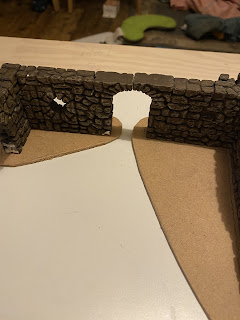 Although I did play around and see how they looked wildly mixing and matching the various pieces.
To supplement these, I decided to make some quick and easy walls that I’d been thinking about for quite some time, using cork mats: 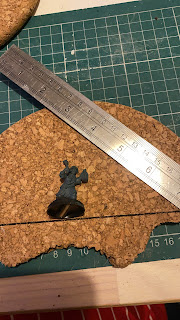 These were from IKEA, I believe - whilst foam might be the go-to material for most modellers, I’m a huge fan of cork (I blame Matakishi and their tea house) and thought I could make a serviceable set of ruins using these. So I set about cutting and tearing some rough wall shapes using a handy Frostgrave thug as a scale guide. I knew I wanted a door in one piece, so used a base to ensure I had a symmetrical curve: 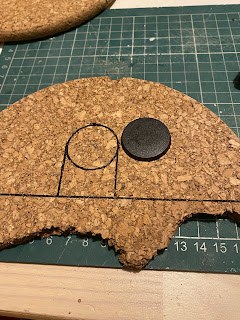 The good thing about ruins is even the wonkiest offcut can make a passable bit of scenery! 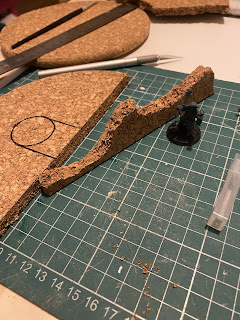 Back to my wall with a doorway: 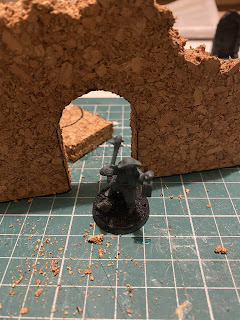 I wanted some additional detail on these pieces - one benefit of foam over cork is you can scribe in brick detail, so to make these look more like built walls rather than smooth sci-fi concrete I took a leaf out of dollhouse modellers books and added bricks using egg box carton, as i thought the texture would look suitable stony when painted. I cut long oblongs and rounded off the edges, and wrapped these around the inside of the doorway so that it would look like stacked blocks: 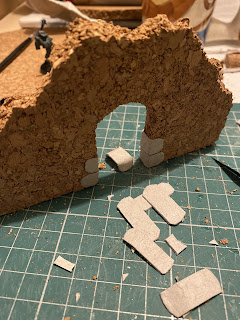 I then cut more bricks and haphazardly arranged them on all of my walls for some additional detail. And yes, I did shave some down thinner to give a bit of variety of depth to the walls. 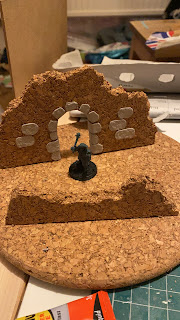 Once that was done (which took the majority of the film The Eternals, I seem to recall) it was time for basing, so I turned to my old reliable mystery board that I saved from a slip years ago: 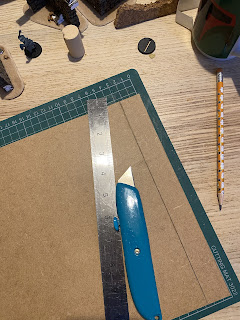 I’m going to be in real trouble when I finally run out of it! I thinks it’s particleboard, but honestly don’t know enough about wood to be confident in that claim…
I measured out each wall piece onto their cut strip, trimmed it down and bevelled away, first with my knife, then going over it with a big file to smooth it out and allow the pieces to hopefully sit more naturally on the table. 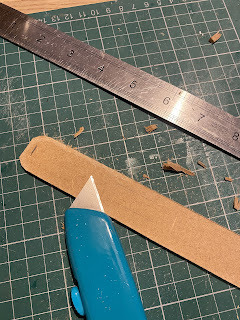 Then it was time to hot glue everything down! 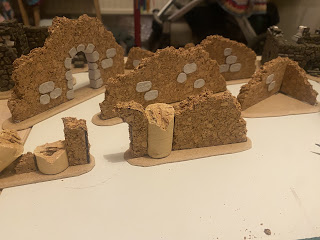 Having trimmed some of the bases down to fit the lengths of wall, I found myself with some odd short lengths of base left. Rather than saving these for a rainy day or letting them go to waste, I made a few shorter pieces, including this fallen column made using a cork: 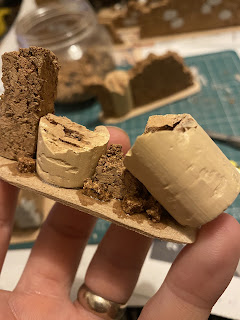 And this odd bit with the curved edge of the mat used because I thought it might look like some sort of ruined column and add a bit of visual interest: 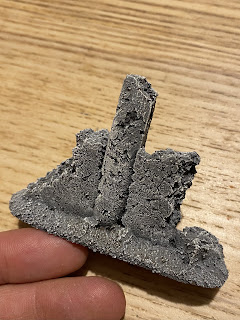 (I forgot to take a picture of it until after if painted it, apparently)
Although the majority of the pieces I made were straight lengths of wall to try and throw down some blocking terrain rather than necessarily being concerned with modelling realistic ruined buildings, one of the pieces I made was a corner ruin, so I spent some time smoothing out the joint where the two walls met with some filler: 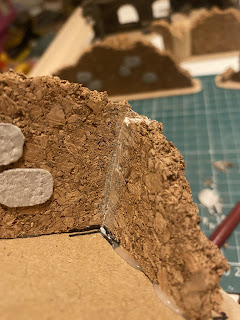 Then it was time for glue and sand on the bases: 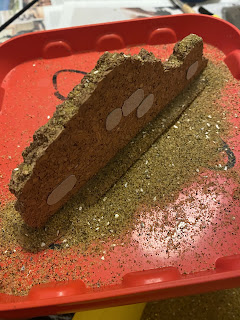 And then undercoating. I decided to try a mix of mod podge and black paint, as cork really needs sealing with something before you paint it if you’re planning on drybrushing it (hard won experience - it’s very frustrating if you knock off a little chunk to reveal the orange cork underneath!) and I’d seen this method recommended in a few YouTube videos. 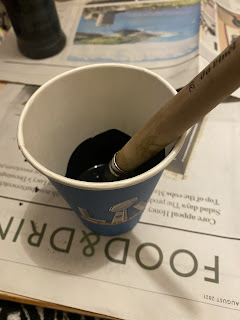 It seemed to work, but there were some issues with knocking some of the sand off of the base as the mod podge seemed to be drying and getting tacky as I was applying it, but not so terribly that I needed to start from scratch.
At this point, all of the pieces then got a blast of Poundland grey primer in my specialist spray booth, an upturned archive box in the downstairs toilet with all of the windows open: 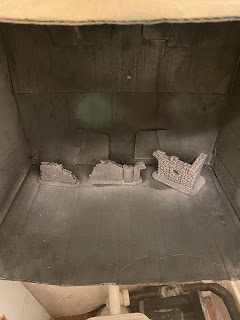 Just look at them, you could probably call them good and slap them down on a table at this point: 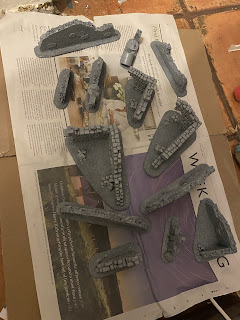 Never one to take the easy way out though, it was time for painting. I picked out the egg carton stones with a darker grey, before giving everything a coat of homemade Vallejo Smoke equivalent wash. 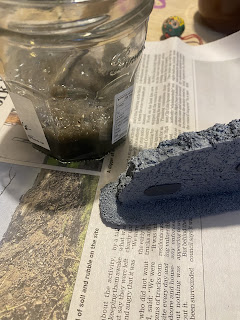 As you can see in the above picture, I added slightly more than just a drop of washing up liquid to break the surface tension, resulting in a very bubbly wash. The first application to a piece revealed that it was not in fact dilute enough, and pretty much just painted the piece brown, so I scrubbed that off and added some more water to the mix. When I painted it on it looked fine: 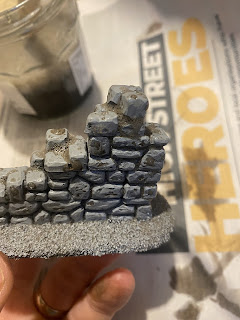 (If a little bubbly)
But as it dried, it looked like I hadn’t actually applied any at all: 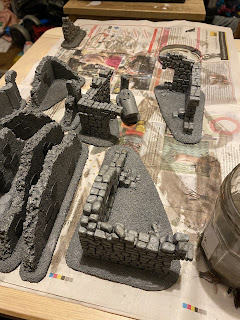 So I had to go back over every piece multiple times trying to get the effect that I wanted. It wasn’t as quick as I’d originally envisioned, but I pretty much got them where I wanted after the fourth or fifth application (having carefully added just a tiny smidge more pigment).
Then it was a case of attacking it with a Drybrush of my usual selection of Wilko tester paint pots and now we have enough ruined walls to fill a little table: 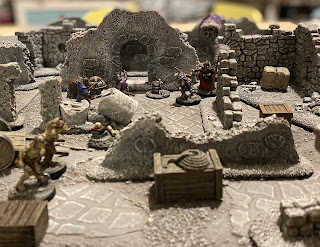 At some point in the future I think I’d like to make some taller multi-storey ruins, but for now these will be perfect for the ruined basements needed for the solo campaign Dark Alchemy.
Posted by myincubliss at 22:03 7 comments:

In an outstanding act of continuing project focus, I’ve finished the next model for my Frostgrave warband, a tracker: 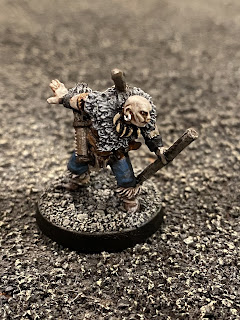 I know I could have just used the Tracker that I previously painted, but I had the Cultist Tracker knocking around and thought he fit the aesthetic of a Necromancer somewhat better… 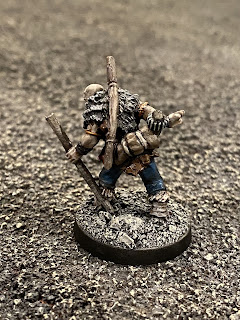 Plus, that’s one step closer to a completed Wildling warband for the ASOIAF project that he was originally bought for!
Finishing him brings the painted warband as it stands to this: 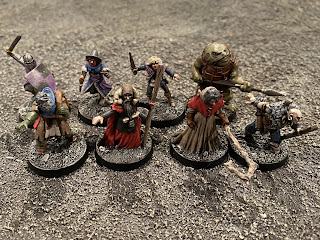 Only three more miniatures to paint until it’s time to venture into the frozen city!
In addition to changing thanks to me finishing painting something, the Tally has taken some other swings recently too:
A while back, hankering somewhat for the days of my youth, I challenged some chums to build a 500 point Warhammer army ahead of the launch of Warhammer The Old World, figuring that with that vague an endpoint it felt like an achievable task. Since then, it has morphed into an eighth edition escalation league of sorts, although we’re still very light on the details (there’s a Facebook group and a Reddit for our road to the old world if anyone else cares to take part).
One challenger chose Bretonnians, but using alternative miniatures as he’s not yet as far as I know won the lottery. After discussing alternative miniature options, I realised that I had pretty much everything he needed in my backlog, including a spare eighth edition rulebook. Handily he lives a road up from my Mother in Law, so I was able to drop this care package off earlier today: 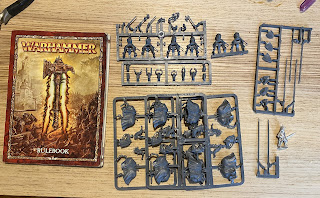 (I also dug out a shield for the foot Knight after taking this picture)
And was also gifted these treats: 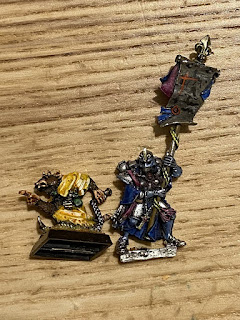 Yes, I’m running Sisters of Battle in a fantasy challenge, I’m going to shoot his knights right off the board!
So, all movement factored in the Tally now stands at:
4 vs -5 = +9
So that’s the secret to keeping the Tally in the black, minus numbers!
So, what’s next? My focus remaining true and finishing off the last of my Frostgrave warband, then it’s Warhammer time!
Posted by myincubliss at 00:45 3 comments: