Having come to terms with the fact that I’m not going to be able to hit my target of 52 painted miniatures this year, I’ve instead turned my energy to prepping some miniatures for next year’s painting! 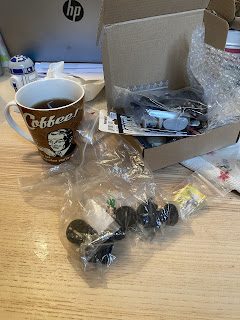 I’ve also dug out some miniatures for a project that I haven’t posted about yet (but have confusingly written about in an as-yet unpublished draft of a post) to prep, and have been struck by the discrepancy in size between ranges: 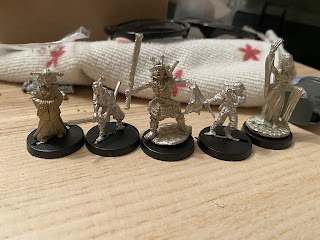 Now I’m not usually a stickler for scale, but these em4 chaos look positively dinky next to the old Clan War miniatures! Luckily I’ve only got a couple of them, so I think that with some careful basing they should blend in with other ‘medium’ sized ranges, just looking like the bottom and top end of the scale!
Also, Christmas happened, and my family furnished me with some miniature goodies: 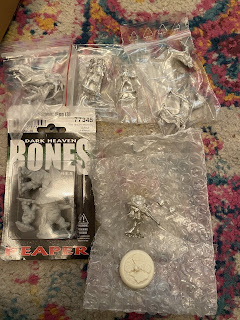 Some Reaper Mushroom Men, a not Mando, and some House Stark expys, taking the Tally to:
47 vs 147 = -100
Which of nothing else is a pleasingly round number to end on...

My plan for New Years Eve is going to be prepping more minis for next year, watching the Big Fat Quiz of the Year with my wife and drinking a festive beverage, so Happy New Year to everyone in advance!

Posted by myincubliss at 18:56 No comments:

Happy Christmas to everyone, in this strangest of years!

I’ve managed a festive paint job too to honour the occasion: 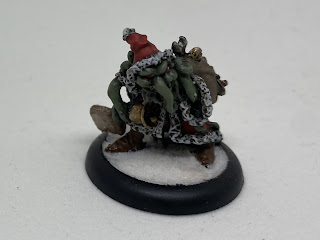 GW Sanity Claws, from 1986, the same as me!
I’ve coveted one for a few years, but generally left it too late to get one for a reasonable price in time to paint for Christmas, and then I would inevitably forget about it until midway through the next December, and the cycle would repeat... this year though, I found one for a reasonable price on eBay from a nice seller, and here he is, joining my pulp Santa from four years ago. 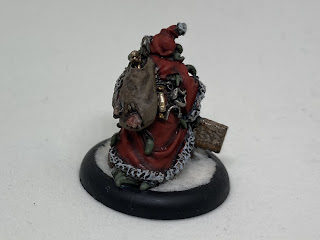 He’s a lovely miniature, although when I was photographing him I did find a few awkward spots that I’d somehow missed and so frantically fixed them up by the light of my photo booth! I made a couple of mistakes when doing the snow too, such as forgetting to base coat the base white before applying the snow flock, as well as just applying it rather than making a paste to allow me to get better ‘texture’, but in my defence we realised a pipe from one of our radiators was leaking when I was basing him, so I had to hurry off to see to that midway through!
The pictures haven’t come out particularly well, disappointingly, as the red and green are much brighter than they look here, so you’ll either have to take my word for it or nip round to have a look once we’re out of Tier 4...
Painting him brings the Tally to:
47 vs 134 = -87
Or it would, if I hadn’t bought a magazine with free Halfling miniatures on the front: 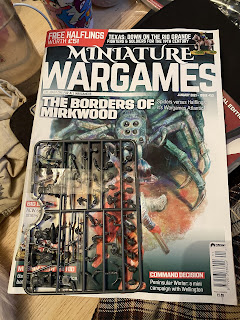 (Yes, I bought a £5.99 magazine to get a £5 sprue free, what of it)
Leaving the Tally at
47 vs 139 = -92
So I’m not going to get it back into the positive, barring some sort of temporal anomaly, but I could still hit that ‘average one miniature a week’ challenge right?
Can I paint 5 miniatures in a week? I mean, I’m furloughed, so maybe, but my children might have other thoughts about that!
Posted by myincubliss at 09:00 No comments:

(The joke in the title only really works if you read this blog post immediately after my previous one...)

Despite working longer than usual hours at work (lockdown plus Christmas makes for busy times) I’ve managed to finish another miniature, snatching twenty minutes of an evening whenever I could: 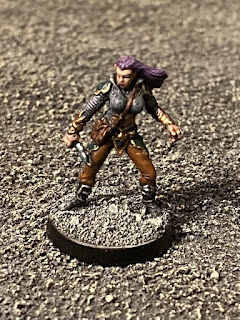 She’s a repaint of an old Dungeons & Dragons prepaint, an Elf Warlock from an old starter set I believe. The detail is a little soft, but she still came out looking quite nice! 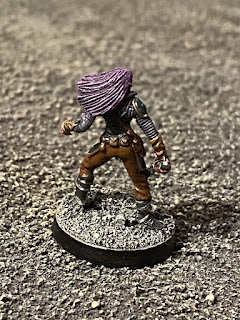 The boob armour was a bit much, but I think with a bit of careful colour selection it looks more like a set of clothes rather than a couple of bowls strapped to her chest now! She got purple hair because... I let my wife choose. While yes it is the same as the miniature in my previous post, no I did not paint them simultaneously, despite the fact that that would have been a much more efficient use of time...
Finishing her brings me one step closer to completing the admittedly fairly sidelined Classes project:
Classes (as of 5e Player’s Handbook):
(I would have updated the links, but blogger just won’t let me on any device currently, so you’ll have to try and imagine the others I’ve finished!)
I may even expand the project out to encompass miniatures to cover all of the races featured in the Player’s Handbook too, but that might be a project for next year...
The Tally took an equal hit in the other direction too this week: 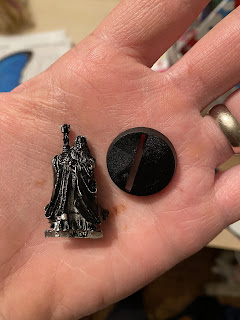 I grabbed myself a Saruman from eBay after grabbing the latest issue of White Dwarf, in order to be able to play the Wizards Duel game in it (I already have a bare metal Gandalf somewhere in the Lead Mountain). So he hops straight into the stripping pot, and takes the Tally to:
46 vs 134 = -88
Posted by myincubliss at 00:05 No comments:

A litre of what?

So, cyberpunk is cool right? There’s a video game coming out imminently that I’m probably not going to get for a while, having too much in the backlog already, but here’s a mini that would be perfect for gaming that: 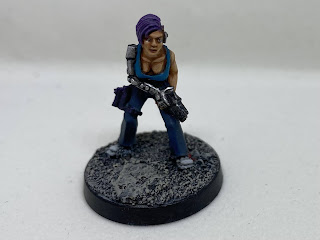 When we came out of the cinema after seeing Alita, I was all fired up for cyberpunk, and kept thinking to myself ‘I want to play a game where I buy arms’, having fond nostalgic feelings for games like Syndicate on the Amiga, and then found myself scrolling through the Crooked Dice store and stumbled across this beauty! 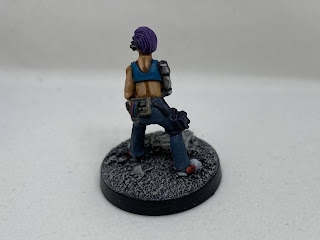 It’s a beautiful sculpt that takes paint exceptionally well, although as previously mentioned on the blog I did sand down her nipples, as in the bare metal they were ... really something else. The arm is great, the gun is great, even her shoes look delightfully futuristic! Special shout out to the hacking desk hanging from her belt, which I painted with colourful cables and then gave it a grubby cream body like it was a piece of 80s kit (because after all, cyberpunk is the past’s view of the future, no?). I dug out a Foundry Asian flesh triad as well, as the future is multicultural.

Here’s a picture of her knee deep in rubbish: 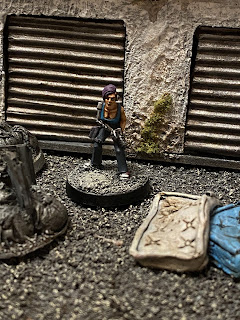 (In hindsight, I should have had this shot lit by the light of a flickering computer monitor for proper aesthetics)
Painting her brings my total of painted miniatures for the year to 45, but as we’re at the point in the year where it becomes obvious that there’s absolutely no chance that I’m going to get the Tally back into the positive before the end of the year the postman has been with some treats: 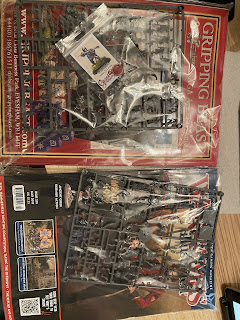 A couple of back issues of Wargames Illustrated with free sprues - American War of Independence Militia (because we watched Hamilton months ago and apparently I have a sickness whereby everything I see or hear translates into 28mm in my head) and Samurai (or at least they were advertised as samurai on the website, but what actually came was Ashigaru with bows, less useful for what I actually wanted them for, converting into zombies for a Japanese Fantasy project that I’ll hopefully write more about in the near future) and a Giants in Miniature... miniature, Lord Callan from the recent Never Mind the Billhooks release, who will probably find new life as a Redanian Sergeant; 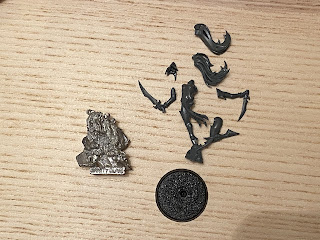 A Citadel Sanity Claws, as I’d been fancying painting one of these as a festive treat for years and a nice seller on eBay was able to furnish me with one, as well as a freebie Witch Aelf from Games Workshop that I got on the same day - the 24 year difference between the two models really shows! 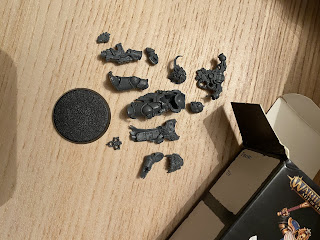 And then today, a freebie Plague Marine from GW, when I popped in to pick up a pot of paint suitable for painting Temerian blue;
Which brings the final Tally for this post to:
45 vs 133 = -88
Posted by myincubliss at 00:05 2 comments: