A very belated post today - over a week ago now, I finally finished off the figure that I painted at Mantics paint and take stand at Salute: 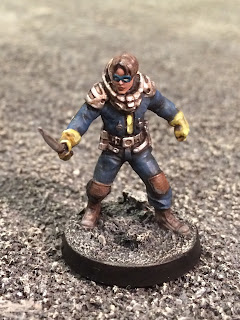 I repainted a few things, like his kneepads, and added a Vault number to the back of his suit to tie him into the rest of the Fallout project (which was pretty much a complete accident - I only painted him blue and yellow originally as these were the colours that were to hand at the time!): 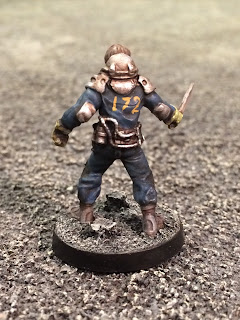 I left the vaguely ridiculous yellow gloves though, as they were such a pain to paint originally that I couldn't bring myself to paint over them - Army Painter yellow is veeeeeery thin, fyi.

I also repainted his face, again! I had a couple of goes at Salute, and then another at home, until I realised the reason that it kept coming out looking like a cadaverous skull, was that he's wearing glasses! As soon as this realisation struck, one more go across the face and it came out looking like something I was happy with!

I figure, looking at him, that he's someone that's robbed a vault suit from another survivor, given that he doesn't have a pip-boy, but has what looks like a pip-boy screen strapped to his belt - he's also turned out to be fairly well-timed, as the next Fallout game has just been announced, and seems to be a scavenge skirmish and survive type multiplayer game!

Finishing him takes the Tally to:

Another thing that broke from the norm for me with this miniature was basing him after he was painted, as usually I like to sort any basing before the model gets undercoated. It seemed fine though (although I was a little nervous about cutting through a painted model to separate him from his integral base) - not that it wasn't without issue: 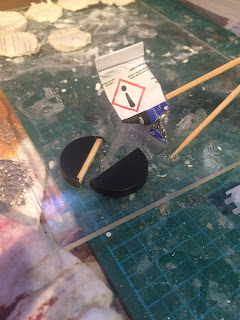 (I got distracted whilst doing something else at the same time and ended up glueing the base to the perspex on my desk, and snapping it in two when I tried to get it off) 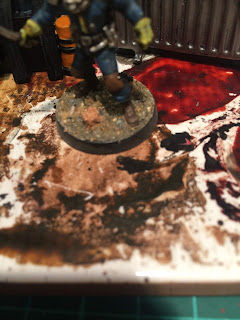 I'll probably stick to my usual method for most things, but I'm considering basing after painting some walkers from Mantic's Walking Dead game, as I'm planning on rebasing them on 30mm DS bases to match the rest of my zombie miniatures: 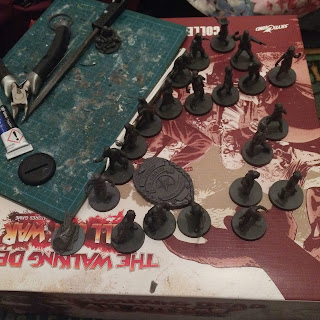 In other, tangentially related news, I also picked up some more Really Useful Boxes, as the 4 litre / A4 boxes are perfect for storing miniatures: 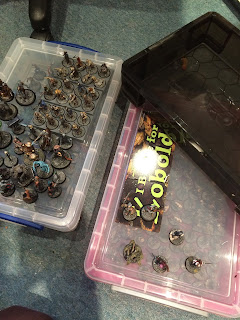 Unless you have pikemen, in which case you have to go back out the following day and buy a deeper box: 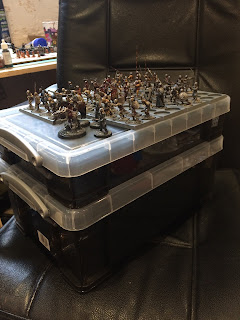 In other other news, the Mantic Hellboy Kickstarter finished, so expect a post about that in 9 months time...
Posted by myincubliss at 22:37 2 comments:

Something of an anomoly... 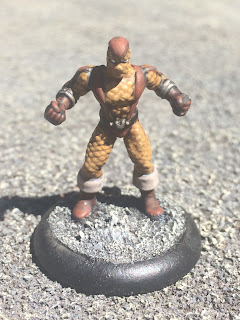 As mentioned in my previous post, it wasn't just Thor Ragnarok that we had to watch to get caught up, so we also watched Spider-Man Homecoming, which again was really good (and not just because it includes a pleasing number of members of the Sinister Six). Thus, I dug out the Shocker mini that I'd had lurking around for a few years and got to painting! 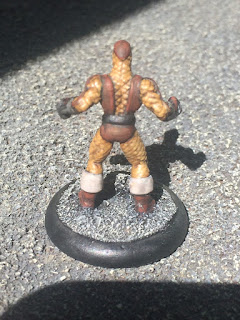 One unusual thing you'll notice in this post: natural light! Unfortunately, that makes it easier to see some of the flaws... I love that the Heroclix figure had the sculpted detail on his body suit, but unfortunately it is very, very shallow, which led to some issues when going over it again after the wash!

So, here he is getting a web to the face and a quip to the earhole: 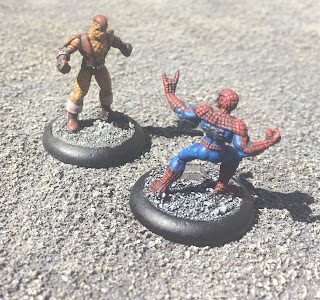 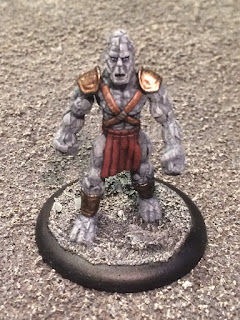 "Allow me to introduce myself. My name is Korg. I'm kind of like the leader in here. I'm made of rocks, as you can see, but don't let that intimidate you. You don't need to be afraid, unless you're made of scissors! Just a little Rock, Paper, Scissors joke for you."

Watch this if you haven't seen Thor Ragnarok:

Then again, it's probably worth a watch even if you have seen the film, just to remind yourself of how much fun Korg was...

Recently, in order to be caught up with the Marvel Cinematic Universe so that we could watch Black Panther in the cinema, my wife and I chugged through a few of the films that we'd missed, and were pleasantly surprised to find that they were good fun, and inspired me to paint something up (expect another imminent post featuring something else from a Marvel movie) 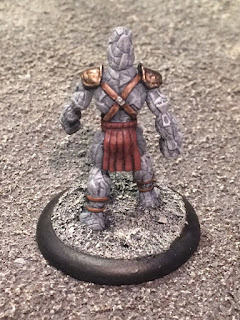 He's a wacky rock guy, there's not a lot else to say really. The rest of my superhero project stuff is mostly street scale (Spider-man and his villains fighting rather than intergalactic space war) so lord knows if I'll ever use him for anything, but hey, sometimes you just want to paint something because you like it...

Here he is with a dodgily painted Thor to give you an idea of how big he is: 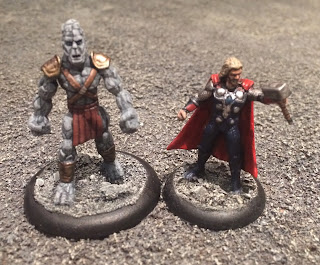 11 vs -69 = +80 (yes, I sold some more miniatures so the Tally continues to look incredibly uneven, but that Hellboy Kickstarter Mantic have on the go currently isn't going to pay for itself...)
Posted by myincubliss at 22:00 3 comments:

My backpack's got jets... 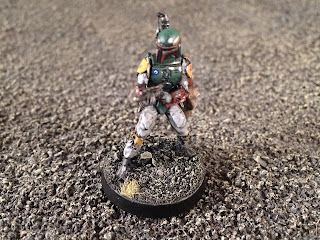 (listen to the song here if you haven't already):
https://open.spotify.com/track/22Y1Gg0uugLCNP48yezX0q 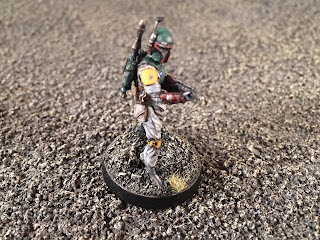 So, it's been a long time coming, but I finally painted my Knight Models Boba Fett: Happy May the Fourth! 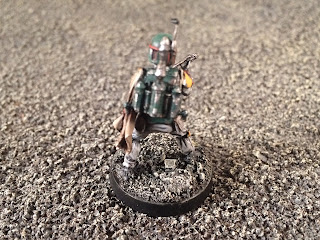 It's a gorgeous model (even if that tiny antenna piece was the bane of my life, as it bent if you so much as looked at it), which I watched the Sorastro video as painting inspiration for before realising that I don't actually own most of the paints that he suggests and having to make do.

Painting was somewhat stressful though - how do historical wargamers manage not to tear their hair out trying to match details on often contradictory reference material? I persevered though, even going as far as to use my helmet and Black Series action figure for reference on where to place the battle damage...

Fun fact - this is the only Star Wars miniature in my collection that features grass on his base. I knocked a chunk of sand off in the early stages of painting, and rather than fixing it right then when it would have been easiest, I figured I could paint it to look like a scorched blast in the ground. It did not look good, but by that point it was too late to repair without needing to then repaint the whole base, so out came a little dab of grass to disguise it...

I'm not the world's greatest painter, but (as you can probably tell by the fact that there are more pictures than the usual front and back shots) I'm really happy with how he came out, even the wobbly freehand, which is normally the bane of my painting experience...

So, it's been 6 years, but I now have all of the bounty hunters from that famous scene painted: 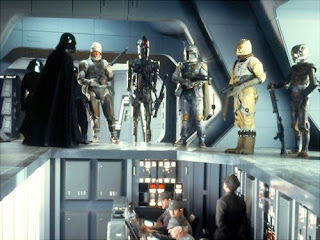 In other news, I spent the GW voucher I got at Easter from my Mother-in Law on a copy of Gang War 1, in the hopes that I can spur myself to build some gangs for Necromunda! There are some Marvel characters and an assortment of other bits and bobs to distract me in the painting queue though...

In other other news, I also won an Instagram giveaway and was sent a set of Walking Dead figures: 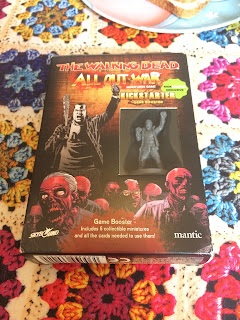 and after a tip-off from Uncle Johnny got some 2x2 boards from down the side of a skip: 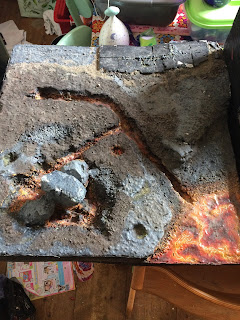 They're nicely modelled (I suspect whoever made them originally did so as Armies on Parade boards) and I think with a little spruce up they'll be great for some skirmish wargaming like Path to Glory. Currently they're mostly a tripping hazard in the basement.