Lannister skirmish force: the beginning and some bugs...

So, I managed to finish painting the start of my House Lannister force for the ASOIAF project (for those of you googling - Game of Thrones): 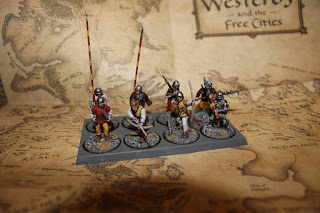 It's a bit gloomy out today, hence the lack of natural light and otherwise terrible picture. The miniatures are Perry Wars of the Roses plastics, with the exception of the foot knight, who is an em4 metal from Forlorn Hope games. I went for a mixture of troops to start with, including pikes, bills and bows, as I plan to use an adaptation of the LOTR SBG ruleset.

Why Lannisters to start? I always sided with them in the books, I loves Jaime, Tyrion is always a blast, and the Lannisters are just overall awesome: 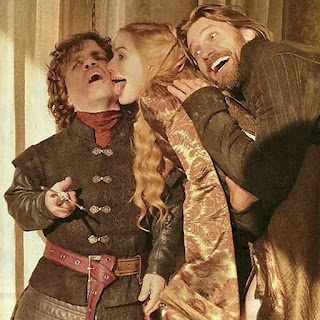 Five out of the eight miniatures are a bit of a departure for me, in that they include stripes - normally I'd either avoid painting stripes, or bodge it with some sloppy freehand and hope for the best, but I thought it was about time I started going about things in a sensible and orderly fashion:

It's as easy as marking out each stripe with a soft pencil and tape measure (actually the hardest bit, as my tape measure is kind of heavy, and you really need three hands): 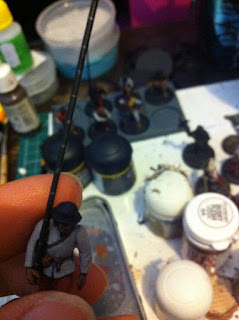 Then fill in one colour: 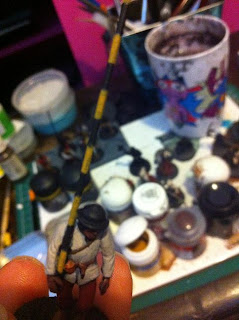 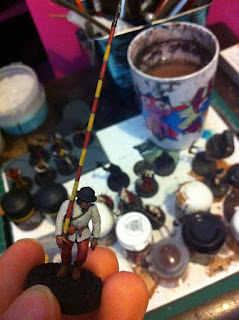 Then it's just a case of highlighting as usual, simple! Speaking of going about things in a sensible and orderly fashion, I've even written down what paints I've used so that I can recreate uniform colours! Wonders never cease!

One thing to note about this batch of miniatures though: something went weird with my gesso. I think I may have forgotten to stir it, or gotten dust in it, or just generally layered it on too thick, but it was odd - there were areas with 'specks' on, little lumps that I had to scratch off and repaint - the annoying thing being, that I would keep discovering them with each layer of paint... Some were cleaned off and repainted smooth, whereas others gave an interesting texture (looking like a tear in clothing), and so were only moderately cleaned up. I may have been overenthusiastic in my application of gesso too, leading to some swamped detail on the boots and faces - unusually, the faces were one of the last things that I painted (as I usually do them first, to give the miniature a bit of personality as their stood in the paint queue), which meant that I didn't realise how bad it was, and had left it a bit late to clean off and re-undercoat... ah well, these chaps are rank and file, I did what I could to fix it as I went along but worst case scenario I hide these ones at the back...

I even got to do something I'd never done before on these miniatures - using static grass! I've previously used it on scenery, but this is my first time using it on a miniature's base. I also tried using flock, but couldn't find a way to make it look good - can anyone tell me where I'm going wrong? I tried a quick google search, but couldn't find any instructions beyond 'stick it to your miniature's base'...

It's not been all Game of Thrones focused though, as I finished basing these chaps: 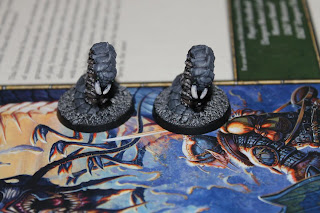 A pair of giant centipedes for Dungeons & Dragons and general fantasy skirmish useage. The only problem with splitting your focus across projects like this being (as well as diminished amounts of things actually getting finished) that occasionally you get a fight breaking out on your paint tile: 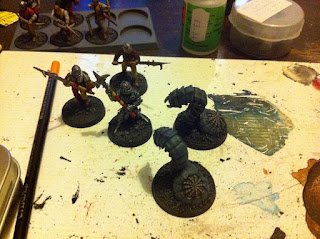 Despite this seemingly boundless progress, as per usual the tally also took a hit in the wrong direction: 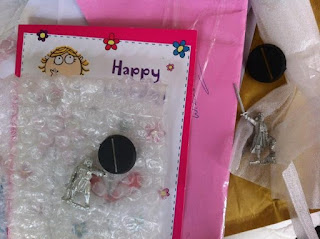 Metal Shagrat and Aragorn miniatures - I especially enjoyed that the Shagrat came in a pink birthday card, but once he was in hand he wasn't quite what I was looking for; I'd originally planned to use him for a Vargo Hoat of the Bloody Mummers conversion, but his armour is a lot scrappier looking than I'd expected. Not to worry though, I'm sure he'll make a fine bandit captain of some sort... The Aragorn, however, is destined to be the basis of a conversion of Jaime without his armour: 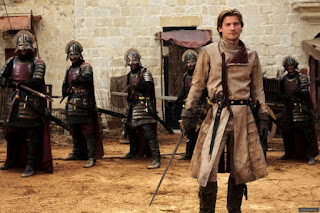 The problem being that I now need two more Aragorn miniatures (or at least the heads thereof) to shave the tiny metal beard off of for my armoured Jaime on foot and ahorse... (hint)

Ah well, fun fun fun, which leaves the tally at:

Which leaves me thinking what to do next - my plan for the ASOIAF project is to do a number of 'warbands' of around a dozen figures each, which (*spoiler*) due to the mercurial nature of the majority of the alliances in the series (*/end spoiler*) would allow me to refight a number of encounters. For example, the Lannisters I've painted thus far with the addition of a Gregor Clegane miniature can stand in for troops raiding in the opening skirmishes of the War of Five Kings, add Jaime and then they'll do for fighting Starks in the Whispering Wood, and so on and so forth...

For the Lannisters, I plan to do some more pikemen (because they're pretty handy in the rules, allowing you to stack the odds massively in your favour if you position enough of them right), as well as some Lannister House guards with swords, spears and crossbows, based on Warriors of Minas Tirith with my cast heads, and then some mounted troops (which will give me a chance to try painting some horses), some more foot knights, some characters...

A ways down the road I plan to make warbands for the Boltons (grim northmen in pink? Why yes please), some Freys (since there's so many of them, they seem to end up in most conflicts), some Brave Companions (I've already got some Mordor Orcs and a Jester to convert into Shagwell), some Brotherhood Without Banners (although I'd appreciate it if people would stop outbidding me at the last minute on LOTR Ruffians that I want to use for these...), some Ironborn, the list goes on! If you've read the books though, you'll know that certain groups get a lot of mileage as it were...

Before all that though, I'll probably crack on with some Starks, based on Fireforge plastics with a variety of arms, weapons and helmets cannibalised from other kits, so that I'll have forces for some of the early skirmishes in the War of Five Kings. I'll need to make some sort of custom wolf shield though, as I quite like how distinctive it looks in the TV series: 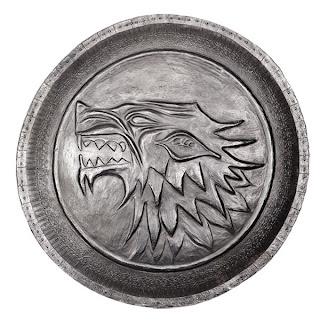 Although it probably won't be a carbon copy, more inspired by...

Inevitably though, my small, manageable plans have occasionally veered into the ridiculous, including a couple of hours where I planned on building Westeros out of Mighty Empires tiles to look something like this:

But I soon dismissed that idea (so don't be surprised if my next post is along the lines of wow look I bought all these Mighty Empires tiles!)

I'll save the rest of the sixty seven paragraphs of waffle I could write about my plans for the ASOIAF project for future blog posts, and end with a small piece of housekeeping: after reading a post by Michael Awdry, I realised that I need to get sorted too - due to blogger being a bit of a bear sometimes, when someone starts following the blog I can only find their blog if they comment - so, if you're a follower whose blog I'm not yet following, comment so I can find you!
Posted by myincubliss at 01:37