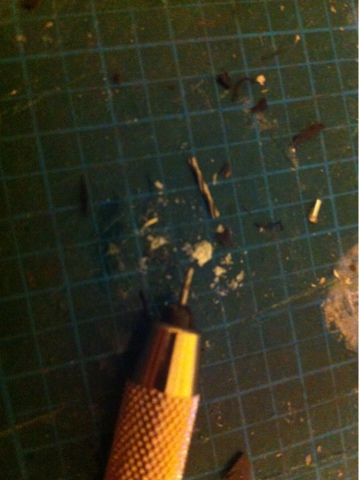 As this seems to crop up every now and then of the various fora I frequent, I thought I'd post up how I fill the slots on my slottabases (for when I'm basing miniatures with an integral base, or more recently, rebasing prepaints like Star Wars or Dungeons and Dragons miniatures). Some people swear by Green Stuff (too expensive, and I always end up mixing up too much), crazy epoxies (science!) or covering over the slotta with a rizla (although admittedly I have tried this, and it wasn't great. I largely stuck Rizla to myself with superglue); I swear by this: 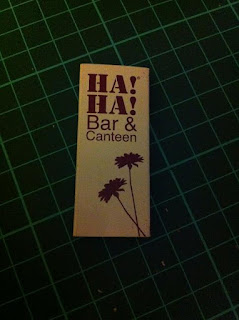 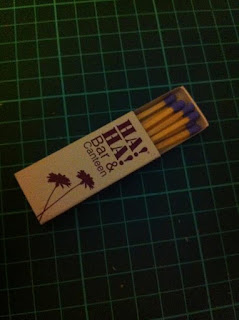 Matches. They're the perfect size to fill the gap on a standard slotta. And handily, a friend of mine was managing the bar they're from when it closed down, resulting in me getting a ridiculously large box of them. Not enough to last a lifetime though, and it will be a sad day when I finally run out of them. Anyways, back to the basing: 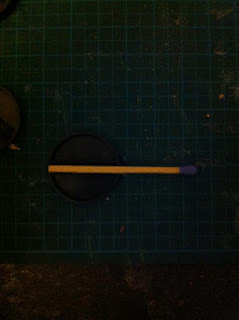 Measure your matchstick against the base, marking off the appropriate length with your thumbnail, 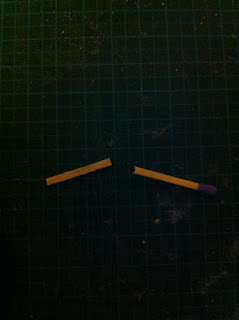 A quick snip with a pair of clippers, followed by a trim with a knife if it needs it, 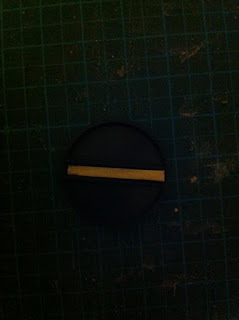 and in it slips! A quick dash of superglue and voila: 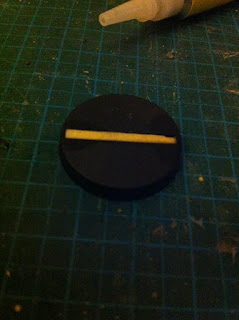 we have a faux solid slotta! [slight diversion: as I'm using cheap pound shop superglue, which seems to sometimes leap out of the tube, at one point I managed to get my hand soaked in superglue. Which was fun. And explains the mess on my mat...] 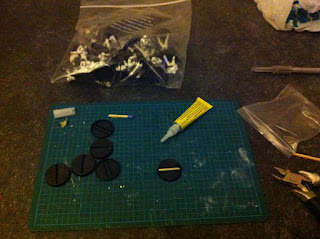 Set yourself up with a little assembly line (and yes, that is a baggie of Stormtroopers, that's just how I roll): 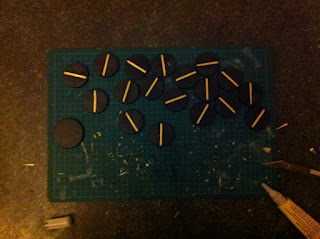 and in the time it takes everyone else in the house to watch 'the Voice' you'll have enough bases ready for two squads of Stormtroopers and a couple of characters... [interesting trivia - one of the finalists on the Voice has served me incredibly potent alcoholic beverages called Pigfuckers. True story.]
Posted by myincubliss at 23:53 1 comment:

Email ThisBlogThis!Share to TwitterShare to FacebookShare to Pinterest
Labels: non-sequitur, step by step

Star Wars The Essential Guide to Warfare - a not-quite review...

So, my copy of Star Wars - The Essential Guide to Warfare

[link to buy] came today! And yes, it is as awesome as it sounds.

All in all, it's a history of warfare in the Star Wars universe, with 21 chapters organised chronologically from the rebellion of the Rakata (pre-KOTOR) right through to Darth Krayt and the new Sith order.

Each chapter covers a particular period of time (or aspect of warfare within that period), such as chapter 7: 'Begin, the Clone War does' or Chapter 15: 'When the Empire struck back', and has 'factual' information (illustrated gorgeously throughout) as well as a variety of sidebars, such as 'War Portraits' of noted individuals and communications between key characters (my favourite so far being one from Admiral Ackbar to his niece about how the Rebel Alliance has to put their trust in people that could technically be categorized as mass murderers in order to succeed).

Now, the meat: how useful is this book to me as a wargamer? It's a little lighter on hard and fast force organisation information than I'd like, although that's more to do with the fact that the Rebels are a ragtag bunch than anything else (although it does have organisational information for Stormtroopers and the Imperial Navy, which is handy as trying to work it out by trying to count them onscreen whilst watching the films is difficult and makes you wonder whether George Lucas was even considering the verisimiltude of the military orgaisations he was portraying). [aside - worse comes to worse, I'm fairly sure the old WEG miniatures game rulebook had suggestions as to how the rebel forces were organised, even though it's old enough to probably be non-canon now...] Most of all though, it's useful as a source of inspiration: there's lovely art throughout, with everything from Imperial propaganda posters to Darth Talon (red Twi'lek Sith with tribal tattoos), there's plenty of eye-candy to make me want to paint and convert things. Also, at 246 pages long, there's enough scenario fodder to keep a gaming group in ideas for a fair while...

Now, I've not read the entire thing cover to cover yet, so these are just my first impressions from flicking through looking at the pretty pictures and looking up things that were of immediate interest to me (like the aforementioned force organisation of the Imperial Army), but it's certainly got me pepped up to get some Stormtroopers ready for repainting (well, that or play some Star Wars Battlefront, we'll see how my attention span goes). 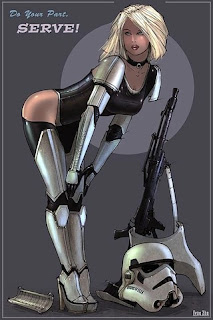 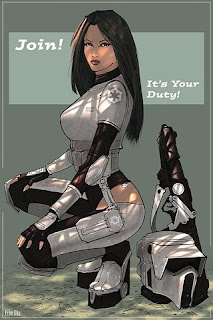 Are canon. Although the actual lady Stormtroopers don't approve, with reasoning like "As for going into combat with a bare midriff, I wouldn't recommend it". Glee!

Why you gotta player hate... 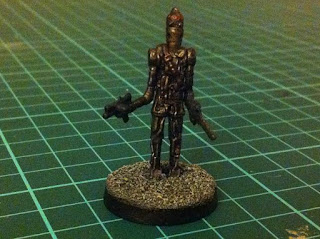 I've been in a Star Wars kinda mood recently, hence digging out a load of the old Wizards prepaints, the first of which to see the business end of a paintbrush being this. He got finished off today whilst we watched the classic Star Wars trilogy back to back. We were originally going to watch all six, but realised that none of us in the house actually owns the prequel trilogy... Cue a walk into town, where in HMV we find that they haven't done the prequel trilogy since they released the Blu-rays a year ago, and they didn't have those in stock either... Yet another reason for me to be angry at George Lucas. But I also bought a large cake that we ate whilst savage ewoks tore apart the Emperor's finest, and I can't stay mad through that...

And yes, I know, I strayed from the canon colour-scheme: his bandolier should be black, not brown, and the buckle isn't bronze, but I fancied injecting a little more colour. And anyways, although you can't really see it in this picture, I painted in the extra detail of the ammo on the belt that wasn't sculpted on, so that should allow me some leeway...

Unfortunately whilst painting IG-88, it seems I forgot to double coat his base with glue, as I realised when I put the first wash on his base and the sand started lifting... cue a rush job to mash it back down, recoat it with glue and repaint it (admittedly it would probably have been easier to scrape it off and start again, but once panic set in I didn't think of that...)

It'd be an unusual week though if there were a post that pushed the tally positively without something else dragging it in the opposite direction, which bring us to this: 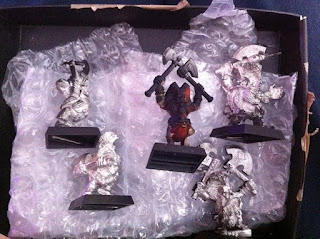 Five Slayers, bought for the two on the left which I thought were the last two modern sculpts that I needed. Until I dug out my box of Slayers though, when I found out that the two on the right were also different to any I already had. Which brings the tally to:

and led me to dig through my stripping pot, to see whether I now had enough different sculpts to make a unit of 30 (the current maximum size), which revealed these: 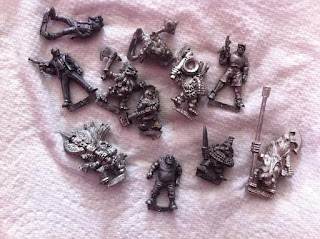 As well as some em4 minis that I was stripping to use for various modern or Judge Dredd projects, there were some classic Marauder Slayers, which brought my total of different sculpts of them to 9 (of a possible 10, according to an old catalogue, though I was sure I'd seen more), and bringing my unit total (counting the old Games Day Slayer on Daemon head as a 4 model unit filler) to 28. So close! Ideally I'd like to get the Slayer stood on Dragon head mini that appears every now and then on eBay, but I can't really justify spending any money on this project right now... Although I will admit that I'm tempted to make up a Slayer army using the Storm of Chaos list using the spares (I've got a bunch of duplicate Slayers, as well as Ungrim and Garagim Ironfist and a couple of the chaps with axes on chains...)
Posted by myincubliss at 22:58 No comments: