And lo, there was wire!

After a long search for the missing camera wire, it appears our house has eaten it. Amazon has furnished us with a replacement, allowing me to post pics of stuff I received and painted a week ago... 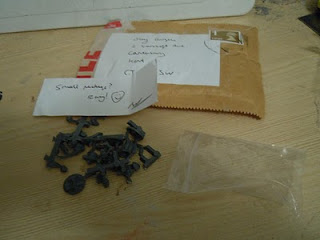 Commander Vyper, being a rather nice chap, sent me some Mantic zombies when I bought some old copies of Harbinger magazine from him. Huzzah for zombies, -3 points to the tally... 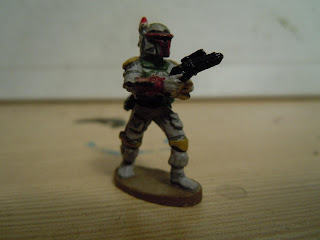 ...and yes, I am easily swayed by the motion of crowds. A whole bunch of chaps over on the LAF have recently started Star Wars projects, which reminded me of the number of plastic WOTC SW minis I own, and the fact that I'd borrowed the old SWMB rules from an old friend... Now, I love Boba Fett. But I do not own a prepaint Boba Fett, and they go for silly money on ebay, hence me now owning this dinky little 25mm WEG Boba instead. I haven't been able to bring myself to strip him yet (partially because I know how much I struggle to match colours when painting), but eventually he'll get repainted as Feskitt Bobb, Boba's slightly shorter cousin...

However, it's not just been minuses on the tally: 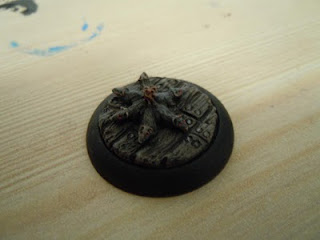 ﻿
Rat King! A combination of Terry Pratchett's 'The Amazing Maurice and his Educated Rodents' and the first Penny Arcade dnd podcast has left me with a bizarre fondness for ratkings... mini is from black cat bases, - I considered cutting him off of the sculpted base so that he'd fit in with the rest of my minis, but that was a lot of work that would have ended up with me throwing away 80% of the mini, so I didn't bother. He'll be a 'queen swarm' for Strange Aeons (from 'Shocking Tales of Madness and Mayhem'), which means I'll need another swarm for him to direct around - I'm torn between getting another swarm from black cat bases, and having two identical minis, or perhaps getting a dnd prepaint and rebasing it to give a bit of variety... 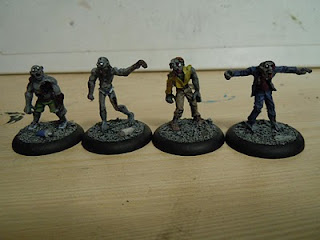 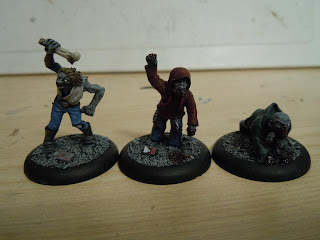 5 Zombies from Copplestone and 2 ghouls from black cat bases (painted last monday, a full week ago, to my shame) take my total of painted zombies up to 65, I think (still never enough...).A couple of them have accesories from the Urban Litter kit from black cat, which I love (the zombie in the workout shorts looks sad that he's dropped his drink...)

Also, have a needless group shot: 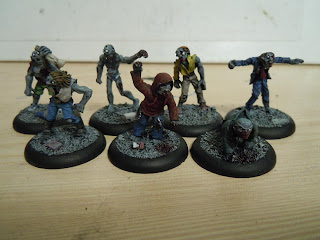 ﻿
Which brings us to a total of:

Still in the green (and afaik, there's only four miniatures currently on their way to me in the post)! Not my most productive month though, as nosing through some old folders on the laptop I see that last august I painted 28 miniatures in a single month, which will be the new benchmark to aim for...
Posted by myincubliss at 21:42