In this economy, a lot of people are having to work two jobs just to make ends meet. Which is why these three, although Torchwood scientists by day, are pulling double duty as researchers for an Evil Genius by night... 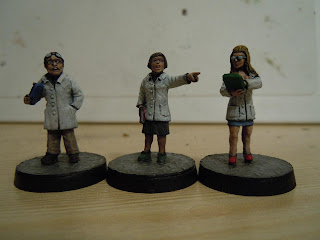 3 scientists from Black Cat Bases - although I really like them, they weren't much fun to paint, as I just couldn't seem to get the paint to go where I wanted to (although that might have more to do with flu than with anything else...)

So with the addition of these three, the year's tally becomes:

also making this one of my most productive months in living memory, and we're only a fortnight in... Having cleared some space in the painting queue, I've also cleaned up and based some more miniatures ready for undercoat, which might even get painted within a month of being prepared, which is almost unheard of!
Posted by myincubliss at 01:05