As October rolls around again, it’s time for another month of Zomtober posts!

As ever, I planned and prepped for this month, but inevitably forgot that the first Sunday in October is only two days into the month, leading to some last minute painting as the deadline for the first post jumped forward - October’s always so far away until the week before!

We’re going back to Mordheim this year: 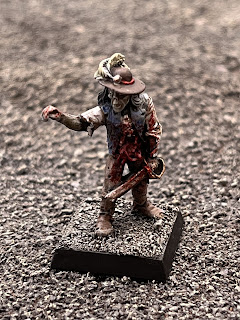 Because Mordheim will always be awesome, and also since I have vague plans to do a small Undead Warhammer army once I’ve finished my Skaven army and played some games (looking at updating Circle of Blood because apparently I thrive on making rods for my own back). 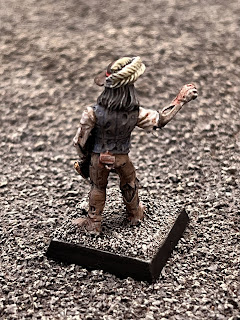 Back in the days of the first lockdown, my planned project (until I got derailed by a buddy messaging saying ‘hey so have you heard of Rangers of Shadow Deep?’) was Mordheim, complete with planning out multiple warbands in a notebook. Having dug that back out, it turns out that there weren’t actually any zombies in my starting Undead warband, but given that I had this lovely metal sculpt (my wife bought me the boxed set back in the day) I figured I’d paint him up anyway!
I went for a grubby paint scheme, even branching out away from my usual grey based scheme for zombie flesh. I especially appreciated painting grubby and dirty rather than trying for neatness when it hit one in the morning the night before post deadline day…
Before we hit the Tally, here’s a poses pic of my new shambling chum hanging out in an old graveyard: 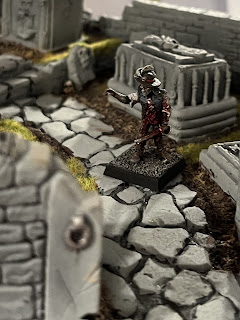 Painting him brings the Tally to:
67 vs 63 = +4
The Tally may well go up again before next week’s post, as what I was painting before I realised how soon the deadline for this post was was on the final stretch before being bumped off of the painting handle…
Posted by myincubliss at 12:05