And here we find ourselves back to our more traditional posting slot of almost too late for the deadline, but still squeaking in with another completed zombie: 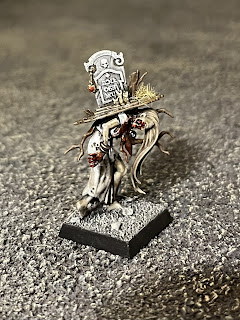 The freebie zombie from GW actually painted up really nicely - regardless of how you feel about them having a gravestone in their back and a stake through their heart, it’s a nicely sculpted mini that takes paint exceptionally well, plus it has enough details to add a bit of visual interest without being so busy that it’s a bear to paint. 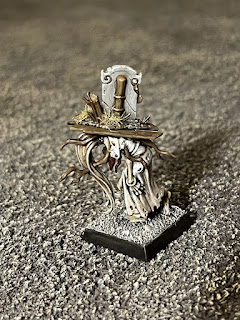 But what’s that there’s more? Not much more, admittedly: 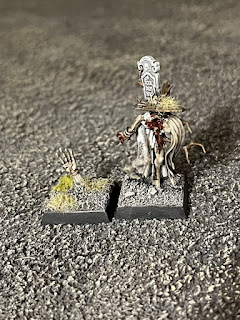 A quick raid of my bits box and I was able to make a zombie bursting forth from their grave. Whereas the rest of the zombies got plain grey ‘city rubble’ bases, this one got some grass and moss as I wanted to really make it look like it was breaking through the ground, upending some plantlife, rather than just being a hand with some sand stuck to it as it might have looked otherwise.

One of the reasons I wanted a very short zombie like this was that I also dug out a dreg that I converted way back when I was probably eighteen, that has his spear levelled in suck a way that he’d never rank up with other miniatures. Unless he’s behind someone like this hand, that is…

However, the dreg didn’t get finished, as Friday night became ‘desperate last minute Halloween costume making’ rather than the usual ‘painting and a cup of tea’: 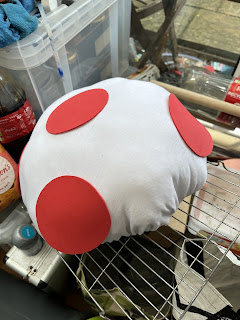 See also Saturday morning, painting something a little bigger than may usual scale so that my son could be Toad from Super Mario: 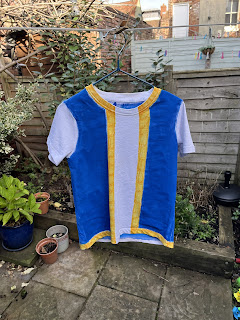 He was very happy with the costume, even if his toadstool hat with all of its stuffing made him overheat somewhat (also, my wife sewed a complete Starfire costume for our daughter, which is even more impressive than this that I made).
But I digress - not content to have just a hand as my additional submissions, I pressed on Sunday evening to get this handsome chap finished: 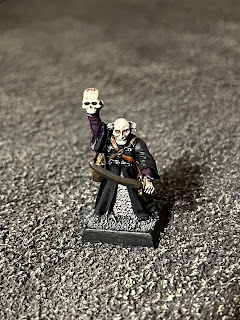 The Mordheim Necromancer! Apologies for the terrible photos of him, he’s come out looking fairly washed out, but that’s more to do with taking pictures in the dining room on a Sunday night than anything else. Although on that note I took all of the miniature photos in this post at the same time, so I’m not sure why the Cursed City zombie came out with good looking pictures while the rest didn’t! 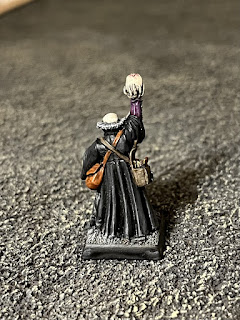 In hindsight, maybe I should have weathered up the Necromancer’s robes too, but on the other hand I’m assuming as an actual living chap he probably takes better care of his robes than the shambling hordes he’s bent to his will. 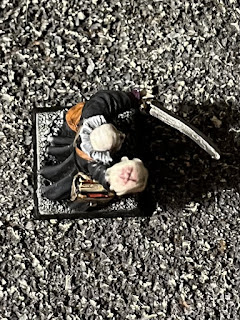 Skull! It has a rune carved into it, so some Carroburg Crimson smeared in and around it gave it a suitably grim and gribbly appearance.
So, in total this Zomtober we have the start of a unit of zombies: 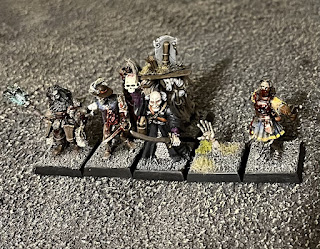 Which if you add to the skeletons that I painted way back when means I’m probably approaching having more points of Undead painted than Skaven, so I’d best get back to painting some ratty boys!

All this Mordheim painting had me browsing eBay, and so after painting the Cursed City zombie I treated myself to the Ogre from that game: 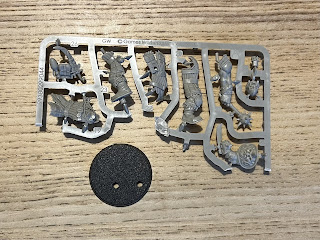 He’s a nice sculpt, who doesn’t look particularly like he’s from AOS, so will make an excellent Ogre Bodyguard as being me I’ve obviously started thinking about a challenge where I paint up all of the Hired Sword options from Mordheim just in case I ever play it…
All in, this brings the Tally to:
73 vs 65 = +8