Goes the beat of the drum: 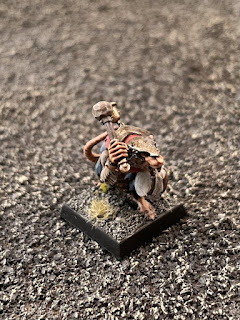 Inorexibly, my small Skaven army grows! Batch painting the block of slaves before took ages, so I thought I’d break the Clanrats down into smaller chunks so I’d get the satisfaction of finishing things more regularly. Don’t worry though, I’m not planning on painting them all individually, it’s just that I liked the look of this mini so fancied painting him on his lonesome as something of a colour test: 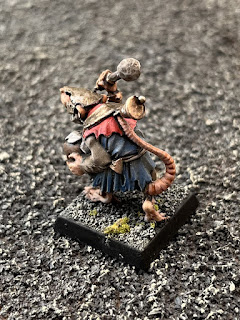 I’ve gone with a blue as my main ‘uniform’ colour for the army, although I think I may have gone too bright on this particular figure for what is supposed to be a grubby tunnel dweller. I’ve decided to use red as a spot colour for leaders and elites, to make them stand out a little, which I know doesn’t really make sense in reality given that Skaven leaders should really be hiding at the back rather than standing out with fancy red neckerchiefs, but allow me this foible!

161/500 points (I was half a point out in my previous Skaven post, as I forgot that the Clawleader technically has a shield even though the mini I painted doesn’t).

No mention of the Tally yet, as the postman has brought more bits and bobs: 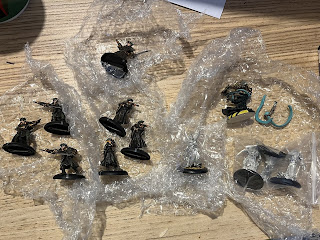 I know, I haven’t even painted the last lot of Warmachine nostalgia purchase, but funny story the one of the minis I’d bought previously was actually damaged that I hadn’t been able to make out in the pictures, and the seller was kind enough to offer to swap it for another one, but to make postage worth it I bought some more things - Arcane Tempest gun mages, because they’re cool; a Skarlock Thrall, because, erm… I thought it was cool; and Narn, because I think the Mage Hunters of Ios are oh you get the idea…
Annoyingly, the Sorscha mini in the previous batch of purchases turned out to have been liberally doused in superglue over her hand when I stripped her, and trying to clean her up her weapon just disintegrated, leaving me ever more frustrated trying (and faking) to drill into her tiny hand to take a pin to try and rebuild it, which killed the momentum on my planned Khador painting stone dead sadly.
Tally:
66 vs 63 = +3

In other news, having finished painting the ghouls, I figured that as I now had everything except a vampire painted up I’d go ahead and play the ‘Lost in the Crypt’ scenario from Spellcaster magazine, since the chances of even rolling up a vampire or a wraith were very slim (I obviously encountered a vampire and two wraiths, as it seems in Frostgrave I can actually roll high, but only while rolling on an encounter table).

After failing to print out dungeon tiles in the right scale, I decided to go DIY and make myself a bespoke dungeon board using a large piece of old cardboard: 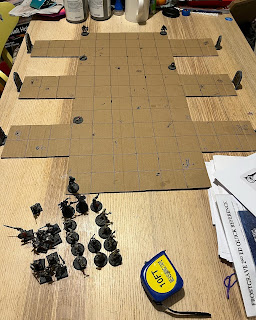 Complete with some additional declaration from my daughter: 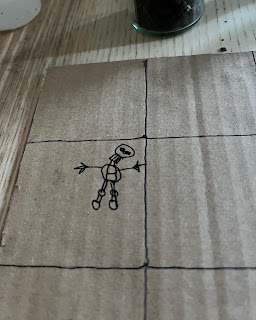 So my new Captain, on their way to meet up with their new employer, manages to fall into a hole in the undercity and fights their way out, finding a magic bow, sword, boots along the way. Things started fairly well, as she plinked every monster she came across from a distance before sprinting from door to treasure to door, even managing to nuke a vampire (played by a lich mini, as I haven’t painted s vampire for Frostgrave yet) with a magic arrow and a lucky roll. Eventually she found the exit door, and decided to try and take down the two wraiths that were closing in on her to bank that sweet XP, but in the end decided discretion was the better part of valour and fled…

So, joining up with the rest of my warband, what next for my Necromancer and his merry band of chums? I’m tempted by the Hunt the Golem mini campaign, as my Necromancer has picked up a couple of constrict based spells so it makes sense that he’d follow up on related rumours, but I think first I might run through all of Perilous Dark to teach myself the key things for making solo Frostgrave scenarios, so it looks like I need to make some vapour snakes and a couple of constructs…